The Gorbachev factor in the Karabakh conflict 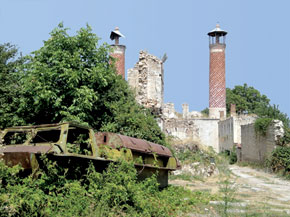 Much has been said and written about the hostile attitude of the first and last president of the USSR, Mikhail Gorbachev, towards Azerbaijan and the Azerbaijani nation and how he supported Armenian separatism in Karabakh. However, Ukrainian political analyst, Ilya Osadchuk, who once worked in the administration of Gorbachev Foundation spoke recently about how the former president sold Karabakh to the Armenians. His source was Viktor Chebrikov, former chairman of the KGB (1982-88). Osadchuk revealed interesting facts about how Gorbachev destroyed the USSR in an interview with the Ukrainian Hvylya website. One of his stories was about how Gorbachev nurtured Armenian separatism in Karabakh through the KGB, made arrangements with the Armenian diaspora in America and also told of a gift given by the Armenians to his wife Raisa. (http://is.gd/XOGZI6 in Russian)

Osadchuk made it clear that the American secret services tried to recruit Gorbachev through Victor Israelyan, deputy head of the USSR mission to the UN. He supposed that Israelyan had himself already been recruited. In the mid 1980s, when Gorbachev was Secretary for Agriculture on the Central Committee of the Communist Party of the Soviet Union, the then director of the CIA, George Bush, approached Israelyan at a function for foreign diplomats in Washington and asked him to organize a meeting with Gorbachev. However, Israelyan could not oblige at the time. Bush approached Israelyan again at a meeting in Geneva with the same request. After returning to Moscow, Israelyan met Andrei Gromyko, USSR Minister of Foreign Affairs and mentioned the CIA director’s request. Gromyko listened to him carefully, but said nothing for 15 minutes while looking out of the window and finally asked: Do you have any other questions? As Israelyan left the building, security stopped him and took away his diplomatic ID; soon afterwards he was relieved of office. He spent the final years of the USSR in the USA and died in 2005. It might be assumed that nurturing Armenian separatism in Karabakh was among the topics discussed during contact between the member of the USSR mission to the UN and American intelligence. The Armenian diaspora in America was very active in promoting separatism in Karabakh; it financed covert Armenian organizations in Karabakh and directed their activities.

Osadchuk mentioned another interesting detail. When Gorbachev travelled to the USA in 1987 as General Secretary of the Communist Party, he took with him Vladimir Kryuchkov, deputy chairman of the KGB. KGB chairman Viktor Chebrikov was against Kryuchkov accompanying the General Secretary to the USA because Kryuchkov had proved a failure as head of the organisation’s First Central Administration. According to Osadchuk, although Kryuchkov did not have the skills necessary for an intelligence officer or leader, he was quite the intriguer. 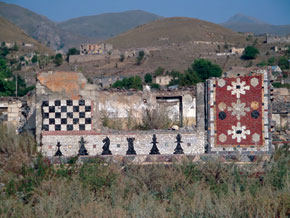 A view of the Azerbaijani territory occupied by Armenia. The Kelbajar museum, 2010
Armenians bearing gifts

Once in the USA, Kryuchkov arranged for the Armenian diaspora to meet Gorbachev; it was there that Raisa Gorbachova was presented with a diamond necklace and a painting. Gorbachev himself was pressed on the historic problems of Karabakh and of the importance of annexing it to Armenia. Kryuchkov was present at the discussion. Not long after the USA visit, the General Secretary relieved Chebrikov of his post and appointed Kryuchkov in his place. The Karabakh war began soon afterwards. According to Osadchuk, Chebrikov had shown him a video of a birthday party at his house. Kryuchkov was there. At the party, Chebrikov asked Kryuchkov: How many millions did you give to Gorbachev to become chairman of the KGB? It is interesting to ponder where Kryuchkov, Armenia’s ‘insider man’, got those millions from - perhaps client gratitude extended beyond necklaces and paintings.

Osadchuk says that Chebrikov had nominated his first deputy Filip Bobkov for the KGB chairmanship. He was an experienced intelligence officer and army general and resolutely opposed to the Karabakh conflict. Once the conflict erupted, Gorbachev appointed Arkady Volsky head of the newly-established special administration committee for the region. Osadchuk says Volsky could have prevented the Karabakh conflict and even achieved peace:
However, Gorbachev was not interested in peace, for some reason he hated Azerbaijan and Heydar Aliyev.

We should point out that one of the key ideologists of Armenian separatism in Karabakh was academician Abel Aganbekyan, a leading economic adviser while Gorbachev was General Secretary. In November 1987, during a visit to Paris, he met representatives of the Armenian diaspora at the InterContinental hotel and propounded the economic importance of annexing Karabakh to Armenia. His suggestion was rapidly disseminated within Armenia and Karabakh and mass meetings in Stepanakert (original name Khankendi) soon followed, demanding annexation to Armenia.

Gorbachev, who was one of the main patrons of the Armenian plan to tear Karabakh away from Azerbaijan and who was personally responsible for the 20 January 1990 massacre in Baku (see http://www.visions.az/history,103/), now passes his time in the USA and other western countries. As a rule, he avoids speaking of the reasons behind the Karabakh conflict, or he restricts himself to general terms as if understanding his guilt. Last year, in an online interview with the Kommersant newspaper, two journalists, one Azerbaijani, the other Armenian, asked about Karabakh. This was Gorbachev’s answer:

I know what should be done there. During the revolution and afterwards, the internal and external borders were identified and lands divided. However, the lands were divided in such a way that it would be possible to make neighbours dependent on each other, plant the seeds of conflict, appoint Moscow as arbitrator and thus legalize the centre of power. On the other hand, the problems have always been there, both before and after the war. The Karabakh issue is a very old and difficult problem. Both Azerbaijan and Armenia have continually accused me of supporting one side. However, that was not the case. I have always said that conflicts arising from national causes cannot be resolved in victory for one side and loss for the other. Both sides have to reach consensus. Perhaps when Europe unites it will become easier to untie this knot. (http://www.kommersant.ru/Doc-y/1330534) 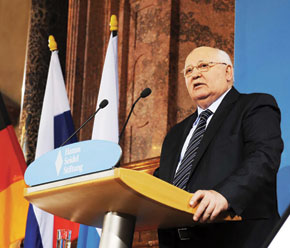 There is other evidence of Gorbachev’s role in starting and fostering the Karabakh conflict. Armenian separatism in Nagorny Karabakh became even more active after he rose to power in 1985. The previously secret Armenian Karabakh Committee and its separatist-terrorist organization Krunk (Crane) in the Nagorny Karabakh Autonomous Region began to operate quite openly and the Miatsum (Union) movement was established. Many Armenians who were around Gorbachev and influenced the decision-making process played significant roles. As we have already noted, one of Gorbachev’s economic advisers, Abel Aganbekyan, spoke on the economic importance of annexing Nagorny Karabakh to Armenia. This speech was one of the main catalysts igniting separatism in Karabakh and Gorbachev took no action against an adviser nurturing ethnic conflict within the USSR.

There is also much evidence of the KGB’s role in nurturing the conflict. For example, that the attacks against Armenians in Baku in early 1988 were provoked by KGB agents is very well known to witnesses of those events. Investigations also established the role of the KGB in the Sumgayit events of February 1988.

Heydar Aliyev headed the Azerbaijani SSR from 1969 to 1982, was a member of the Politburo, deputy chairman of the Cabinet of Ministers and one of the most authoritative members of the Soviet administration. When he was removed from his post by Gorbachev on 22 November 1987, this created an opportunity for separatism in Nagorny Karabakh. Once Aliyev was estranged from the Politburo, no one remained to oppose the intrigues of the Armenians close to the General Secretary. The head of national affairs on the Central Committee of CPSU, Vyacheslav Mikhailov, had promised support to Karabakh Armenians on Gorbachev’s behalf. In the meantime, David Shahnazaryan, an assistant to Gorbachev, told an Armenian delegation from Khankendi to Moscow, that the General Secretary respected the right of the Karabakh Armenians to self-government and was ready to legalize their request.

Mikhail Gorbachev is lauded by the west and was awarded the Nobel Peace Prize in October 1990. This was just 9 months after he had presided over a slaughter of innocents in Baku, on 20 January 1990. In Azerbaijan he is remembered for this and for the machinations over Karabakh which stirred up conflict between Armenia and Azerbaijan, again resulting in slaughter.