Archaeopark - Down in the Inner City - 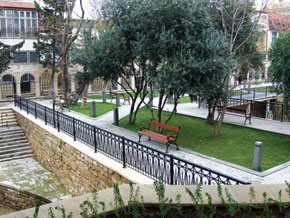 View of the Archaeopark from the north-east
Pages 58-60

The president’s declaration of 2011 as the Year of Tourism gave historians further encouragement to study and preserve historical and cultural monuments for future generations and thus also contribute to the tourism sector. The custodians of historical architecture and ethnographic reserves sustain our cultural heritage by both protecting monuments and creating the conditions for tourism to develop.

There has been a clear and marked improvement in the tourist infrastructure of Baku’s old Inner City in recent years. The Inner City Historical and Architectural Reserve Department has contributed greatly to this work. The historical location of ancient Baku, now called Icheri Sheher (Inner City), is now a modern tourist centre. The architectural monuments and historical sites studied by the Reserve Department are preserved, added to tourist routes after renovation and made available to tourists. The historical structures located along the medieval caravan trade route (now A. Zeynalli Street) have been renovated in keeping with a medieval atmosphere; the Muhammad mosque, the School-mosque, the Siratagli religious-architectural complex, including its ancient garden, the Chin (Wish) Mosque and other recreational areas can be cited as examples.

Conservation work is currently underway on Maiden Tower, the city’s unique architectural gem. The work is being carried out by Remmers, a German company, and the Austrian company Atelier Erich Pummer. New technology is being used so that no stone will be removed from the monument or any damage done to the appearance of the tower. The work on this unique monument will continue until 2013, after which very interesting scientific and historical displays will be organised there.

The Cultural Heritage of Water was the theme selected by the International Council on Monuments and Sites (ICOMOS) for the year 2011. Most countries have water-based tourist facilities such as seaside promenades, beaches, tourist islands etc. In this context, the study, restoration and conservation of the medieval Bayil castle, located on a small island in the Caspian Sea near the Inner City, will also be a great boon to tourism.

Many underground water wells have been unearthed in recent years during soil-cleansing works in the Inner City and most are being preserved and researched. They are also technically certified, lit internally, covered with organic glass and then opened to tourists. 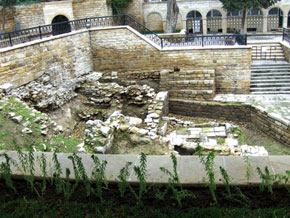 View of the Archaeopark from the north-east

Archaeopark with a spiritual heart

The next step in building the tourist infrastructure is to develop the archaeopark in the Inner City’s old garden complex. The opening of this archaeopark, commissioned in the year of tourism, was a contribution to archaeological tourism.

The establishment of an infrastructure for archaeological tourism, and the building of archaeoparks, is well-established practice globally. An example is in Rome, where most tourists go to see the Forum, which is not an architectural monument, but an archaeological discovery. Over the years it had been completely lost to view and was only discovered again as a result of archaeological excavation. Italy has other archaeoparks at Pompeii, Herculaneum and Stabiae. France, Germany, the Czech Republic and Turkey are also popular destinations for archaeological tourism. In Turkey, the long-term excavations and preservation carried out in ancient cities near Antalya, have opened these areas up for tourism.

There are huge opportunities in Azerbaijan for the development of archaeological tourism, and the fascinating sites in Qabala, Shamkir, Goytepe and Aghsu are being prepared to exploit the demand for just this kind of experience; the opening of Baku’s Inner City archaeopark is a landmark in this process.

A bust of People’s Painter Azim Azimzadeh (1880-1943), the founder of Azerbaijan’s school of caricature, gives a spiritual dimension to the heart of the park. This wonderfully witty painter depicted the streets of old Baku and the various types who lived there, as well as contributing to the Molla Nasreddin magazine early last century.

Prior to the archaeological excavation of the area, a jewellery workshop had operated there. Following a fire in the building, it was demolished and historical investigations began. Excavations conducted between 1980 and 1985 revealed evidence of ancient habitation. Three separate areas within the archaeopark of the old garden complex have been excavated in different years. The works uncovered a secret underground path, water channels carved through the rock, an underground water-supply and household wells, tandoor (oven) placements and architecture from different periods. Two of the excavations were conducted by the late Farhad Ibrahimov, head of the Baku archaeological expedition. One was dug in 1982, at the eastern foot of the hill on which ancient Baku stood. The investigation produced unique cultural remains such as ceramic and faience utensils, metal tools, fragments of glazed and unglazed (monochrome, polychrome) pots, plates, jugs and black lamps. Reflections of the social and economic, as well as the cultural life of the city were revealed. 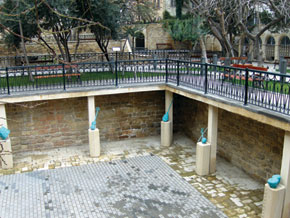 The underground pathway was found to run north-south and was covered by stone slabs. It is part of the tunnel found by archaeologist V.M.Sisoyev in 1925 in front of Maiden Tower; it also passes under the Multan caravanserai and goes as far as the Gosha Gala (Twin Tower) gates. The pathway was deliberately constructed in two parts. In the lower part there is a water pipeline of connecting ceramic pipes.

The material, cultural and architectural remains, as well as other constructions obtained from this excavation, are very useful for the study of medieval life in the Inner City.

The second excavation, near the south-eastern city walls, from 1984-85, is also preserved. This area is particularly interesting for the remains of complex constructions in the first cultural layer, reflecting the history of the city from the 14th to the 17th centuries. A double architectural construction and a large utility complex were discovered in this area. Research has revealed that the eastern and southern sides of the double architectural construction were destroyed to make way for the jewellery workshop in former times. The floor, the western walls and a large tracery stone in the middle of the double architectural construction were undamaged. The floor of a small rectangular room on the northern side of the building was laid with smooth, well-hewn stone slabs. The remaining masonry, two stones at the northern edge of the room decorated with square tracery, was also preserved. Within the borders of this symmetrical design there are five- and six-pointed stars, diamond-shaped and circular figures.

It may be that the double architectural construction in this household complex was for the storage of oil and water, a household’s most important supplies. Long-term habitation and later restoration and reconstruction work, especially the construction of large new buildings at the turn of the 19th and 20th centuries, destroyed the oldest cultural layers. The finds made here prove the rich archaeological heritage of the area near the city walls. Fragments of glazed and unglazed pots, the bases of clay vessels, clay pipe-bowls, clay vessel lids, animal bones etc. were among these finds.

The latest soil-cleaning works carried out in the old garden and the double architectural construction complexes indicate that they were inhabited in the 11th and 12th centuries.

Archaeological investigations and soil cleansing work were carried out in the old garden complex and the so-called Gosha Magbara (Double Mausoleum) in May and June 2010. 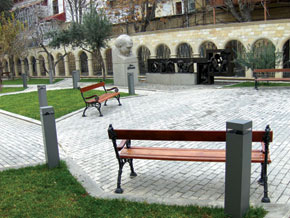 The third excavation area in the archaeopark reflects finds made during restoration and reconstruction work carried out during the laying out of a new park in the area in March 2010. The work was continued after the chance discovery of an arched construction. As a result, remains from the Middle Ages (11th-13th centuries) were discovered and preserved.

Fragments of glazed and unglazed pots, bases of clay vessels, pipe-bowls, pottery, dressed animal bones and copper coins discovered in this territory during investigations carried by archaeologist, T.Dostuyev confirm the existence of a rich archaeological heritage. A shell-strewn layer of rock indicates that this area was under water in ancient times.

The material and cultural remains found in the cultural strata and the stratigraphy of the various architectural buildings, as well as that of the cultural layer, indicate the existence of habitation in this area from the 11th-15th centuries.

The Inner City retains its historical features today. The richness of the archaeological materials uncovered by the historical research and excavation regularly conducted in the Inner City has proved that the site is an inexhaustible source of reliable and valuable information about many previously unopened pages in the history of the Azerbaijani nation and about the wealth of material and spiritual treasure trove which still awaits exploration.