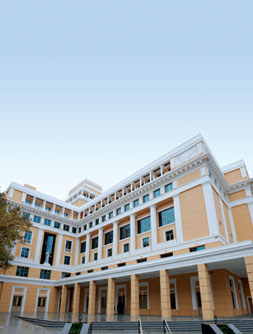 Elmaddin Aliyev and Khayam Abdullayev are young Azerbaijani film directors currently in the middle of shooting a feature film. Philosophical in its approach, the film considers those conceptions of life passed from generation to generation in mother’s milk. Hence the title: ‘Milk’. Like all filmmakers, these young authors are eager to present their creations to the Azerbaijani audience, but it has not always been easy. Cinemas have only rarely shown products of the domestic film industry since Azerbaijan reclaimed independence. However, it seems the situation is going to change following extensive refurbishment on the corner of Bul-Bul and 28 May Streets in the heart of the capital.

The biggest in the South Caucasus

At the end of this year, the newly reconstructed Nizami Cinema will realise the hopes of Azerbaijani film directors as well as their fans: local movies will be included in the schedules. Yusif Sheykhov, from the Ministry of Culture and Tourism promises that the very latest Azerbaijani films will be premiered in the theatre.

This gives the young generation of Azerbaijani film directors a chance to make a name for themselves. New home-grown films will be shown regularly on one of the Nizami theatre’s screens. I think the demand for Azerbaijani cinema will rise.

He said that the theatre now had enhanced status; it is the Nizami Cinema Centre. It is expected to operate as the biggest in the South Caucasus region and to become an International Cinema Centre. There will be a special celebration 27 December - and screenings will begin.

Referred for a major overhaul three years ago, the Nizami Cinema was one of the first in Azerbaijan. The building was constructed in 1934 and put into operation in 1940 as a movie theatre. 10,000 square metres in area and designed by the great Azerbaijani architect Mikayil Huseynov, it was the largest in the Soviet Union. The recent reconstruction was carried out following a presidential decree on the development of the movie industry. 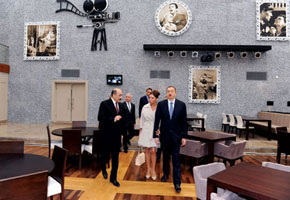 President Ilham Aliyev and First Lady Mehriban Aliyeva open the film theatre, 24 November 2011. With them is Minister of Culture and Tourism Abulfaz Garayev

Walk through a rose-colored cinema

Visions of Azerbaijan visited the new-look building after President Ilham Aliyev and his spouse Mehriban Aliyeva inaugurated the cinema on 24 November, to see what it is like as final preparations are made for 27 December. The building’s distinctive appearance has not been greatly altered. The same design and the same colour scheme have been retained; a touch of orange added to give a rosier feel. An atmosphere of grandeur and harmony pervades the five-storey structure. Designers have used white and other bright colours to enhance the sense of spaciousness.

A meeting with Ilham Babayev, Deputy Director of the new International Cinema Centre, revealed that the most modern film equipment from Germany, Italy and Turkey, as well as sound systems, lighting, ventilation and fire protection systems have been installed. There are now 50 and 80-seat auditoria on the ground floor, a 500-seat major cinema theatre on the first floor and a 24-seat VIP cinema room on the fourth floor. The main theatre has a large screen, some 16 metres wide. Again, this is the biggest in the South Caucasus.

There is a shopping centre on the ground floor, a cafeteria on the first floor, a café club and press centre on the third floor, as well as a 250-seat restaurant with local and European cuisine and administrative rooms on the fourth and fifth floors. The restaurant ceiling can be opened and closed mechanically, according to the season. With the centre’s new status an extra 60 staff will be hired.

It is interesting that the building was first known as the Arts Theatre, and only after the 1950s was it named in honour of Nizami Ganjavi, the 12th century Azerbaijan thinker and poet. The first screening at its opening on 29 January 1940 was of the Soviet film The Fourth Periscope. Viktor Eisymont, the film’s director and three-time recipient of the Stalin Prize, filmed it in 1939. 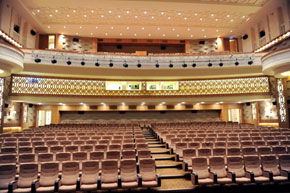 The main auditorium of the Nizami film theatre

As Mr. Babayev told us, the plan is to screen the recently made Azerbaijani film Buta when the theatre opens to the public. Prizewinner at a number of international festivals, including at the Asia Pacific Screen Awards as Best Children’s Feature Film, Buta is a love story about a 7-year old boy named Buta who lives in a mountain village with his grandmother and who becomes the main link between past and future. One day the boy meets an old man who very long before loved his grandmother, who had a birthmark in the form of a buta on her hand. Buta’s grandmother is weaving a special carpet in memory of his mother. The carpet features a but a pattern (buta is the basic shape in a paisley design - ed), a symbol of love.

I think, this is a good film to be shown for the first time to masses of people. Moreover, all new Azerbaijani features filmed in the last two years will be screened at the theatre. We want people to come and watch films at the Nizami theatre. We want them to love us.

How do people get to see local films?!

Elmaddin Aliyev, currently working on Milk, thinks that the opening of the Nizami Cinema could impact positively on the development of the domestic film industry.

Before, there was no chance for new Azerbaijani films to be shown in cinemas or even on TV channels, but now we have hope. However, I don’t think it will be very easy for audiences here to get used to going to locally-made movies. We cannot force them to love new Azerbaijani films, that’s impossible. What may be possible is to start screening profit-making films, I mean films that are easy for the general audience to understand. You see, there are dozens of philosophical Azerbaijani movies which are successful at different international film festivals attended by people who can grasp the essence of their plots. It is not always the same here. We should not only love our films, but also learn to develop a healthy criticism of those films. The question of how to encourage people to watch local movies and to develop a culture of film debate is very important. 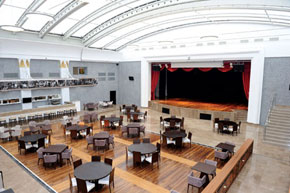 There is a café/presentation area

There was a similar problem in South Korea, a country where the film industry is now developing rapidly. Once, Koreans only went to the theatres to see American and European movies. Korean film directors were practically inert due to lack of demand. The Korean government then supported the screening of local films in theatres; at least one of the films being shown had to be native. A few years later, people began to prefer watching native films and this, in turn, stimulated the development of the Korean film industry. As a result, and within a very short period, Korea has produced myriad talented filmmakers. Kim Ki-duk is one and his name is well-known in the film world; he is a trademark of the Korean film industry.

The cinema audience should be educated

Back in Azerbaijan’s film industry, the question of supply and demand is another core element to be considered. Khayam Abdullayev, co-director on Milk, is optimistic about the future of the local industry and thinks that during the current IT revolution, the promotion of culture also depends on technical innovation:
I’m very confident that when the Nizami Cinema opens the number of newly-produced films will increase. It’s very pleasing that we now have a technically modern cinema venue.

Cinema plays an important role in a society’s development. It’s a similar process to bringing up children; the better the quality of education, the better the result. Thus Abdullayev maintains that the audience shouldn’t be underestimated. All kinds of films, from the commercial to the philosophical, need to be shown:
Every film has its own appeal. It’s a mistake to take the same approach to all audiences. There are some who don’t like intricate, philosophical films and others for whom those are the only films worth seeing. In other words, the cinema audiences should be educated. 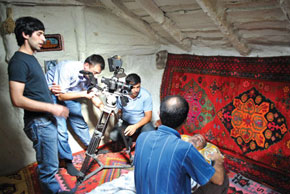 During the shooting of Milk. Young Azerbaijani filmmakers hope their film will be shown on the big screen

Cinema expert Aydin Kazimzade expects stormy film debates will breathe life into the genre. The Nizami Cinema now has every facility for holding festivals, meetings and film debates. The state-of-the-art cinema equipment brought in from abroad and installed in the theatre means that every kind of movie – digital as well as analogue – can be screened. Lack of proper equipment was one of the reasons why Azerbaijani movies weren’t being shown. The main reason for the lamented closing of the Azerbaijan cinema was its outdated equipment.

Kazimzade is very confident that people will go to the Nizami for the films rather than just to pass time:
It will be our own theatre and that says it all. It won’t be just a place for screening films; it will be a space to show our own movies, to have discussions and even criticise them, to hold film festivals and other meetings about the film industry. The Nizami Cinema Centre will form its own audience; it won’t be just like a cinema in a big mall where tired shoppers watch a flick to kill time. It will be a small part of the cinema world.

312460
LiteratureAutumn 2018
Ali and Nino: Love at the Crossroads
by Kate O'Donnell