The Book of Dede Gorgud: A Masterpiece of Epic Literature 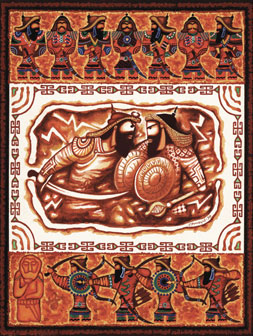 The Book of Dede Gorgud (Kitabi-Dada Qorqud) is a heroic epic poem of the Oghuz – a Turkic tribal group who were the ancestors of the Azerbaĳanis, Turks, Turkmens and the Gagauz. In terms of its historical and cultural significance, this saga is a grand testament to the culture of the Turkic world of ancient and medieval times. This majestic epic, exuberant in its love for humanity and its environment is comparable to the world’s early epic poems: “Gilgamesh” (Bilgamesh), “The Mahabharata”, “The Iliad”, “The Nart Sagas” and others.

The Book of Dede Gorgud, is distinguished among Turkic epic poems like “Koroglu”, “Alpamysh” and “Ural Batyr.... for its antiquity and the information it carries about the culture of the Oghuz.

The first manuscript of The Book of Dede Gorgud, dated to the 16th century and consisting of 12 stories (songs), was found in a Dresden library by German orientalist H.F. von Diez, who published a translation in 1815 of the “Tapagoz” (Goggle-eye) episode, which has similarities with the Greek Polyphemus (Cyclops). Later, the Italian orientalist E. Rossi found another copy of the saga in the Vatican’s library; this was also dated to the 16th century and had six stories-cum-songs. Both copies are written in the Oghuz Turkic language, in Arabic script. The epic, found at the beginning of the 19th century, soon attracted attention from the world’s scholars. It has been translated into Russian, German, English, Persian, Georgian, Latvian, Serb, 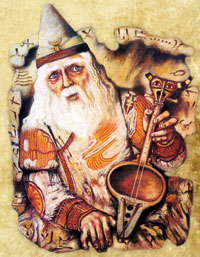 Hungarian and other languages (for English-speaking readers it is still possible to find Geoff rey Lewis’s translation, called The Book of Dede Korkut – ed.)

Nowadays, international scientific meetings are frequently held in Azerbaijan, the saga’s historical homeland, dedicated to a comparative typology of The Book of Dede Gorgud with other of the world’s epic poems.

The continuing interest of readers and researchers in the book lies in its artistic content and broad humanity. Every ethnic epic poem is an embodiment of the life of the social group that created it and which keeps its fi re burning. The whole moral and physical experience of the group becomes an ethnic memory expressed in epic poetry. But the significance of the The Book of Dede Gorgud does not depend solely on its being an ethnic poem – the epic saga of the Oghuz. It stems from the fact that it contributes to the history of human ecology on the Eurasian continent. From this point of view, the book is actually a lasting monument to the cultural history of the peoples of the continent, in the shape of the Oghuz. The epic memory experience of The Book of Dede Gorgud covers the Scythian-Saka, Hun-Oghuz, and Oghuz-Seljuk epochs of Eurasian history.

The Oghuz Turks were born on the horse and directed the energy they received from nature and God into cultural development. 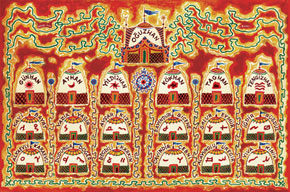 They left an eternal cultural bridge between Asia and Europe – between West and East – in this, their national saga, the “Dada Qorqud” Oghuznama (“The Book of Dede Gorgud”) which they carried from the west to the east and from the east to the west.

The book is a monument that the Oghuz Turks, who viewed their layman’s lives as sacred building missions from God, “lived”, “built” and “wrote” in Eurasian space.

There are 12 episodes-cum-songs. They reflect the everyday life, moral and physical experience of the Oghuz; particular beauty and value lies in the ecological aesthetic expressed in their attitudes towards people and society, the world and nature. The relationships between people and their environment is one of ecological harmony. The epic’s gallery of images keeps the sacred values of the Oghuz world alive within itself. It refl ects the aesthetics of their humanitarian way of life.

The image of every Oghuz bey, the bearer of Oghuz aristocratic values, is one of the highest morality. This is a virtue that appeals to every reader, regardless of ethnicity. In fact, it is impossible not to respect the behaviour of the Oghuz beys towards people, nature and the world.

Bakil, a character in the stories, is also a patron of hunting. He was so humane in his feelings for animals that he never hunted them with an arrow. He caught them with his hands. He kept only those that were fit for eating and that he needed, and he released young and underdeveloped animals back into nature. However, before 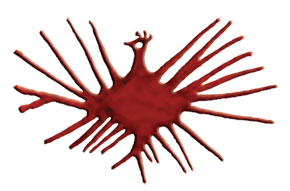 releasing them he marked them so that other hunters would not accidentally harm them. In this way, the image of Bakil is a fine aesthetic statement, reaching beyond the boundaries of the Oghuz and making the work an epic for the world.

In the The Book of Dede Gorgud nature is a separate world with sacred values. The Oghuz respects every single living and inanimate element of the world of nature around him and does not separate himself from it. He sees the horse as a brother, the tree as a comrade and water as holy; he regards the wolf as a symbol of profusion, improvement and prosperity. Salur Qazan, whose house and people are looted by enemies, learns the whereabouts of his loved ones from water, the wolf and the dog, whom he regards as loved ones too.

The epic poem describes the Oghuz as possessing a highly developed sense of the aesthetic. They have an amazingly sensitive attitude towards poetry and music. The Oghuz loved the qopuz, their national musical instrument (a kind of lute), and listened with admiration to ozans (singers) who sang ethnic songs – Oghuznamas – accompanied by the qopuz. Such was their respect and veneration of art and music that they would not kill a sworn enemy who was holding the qopuz, and they would let him go. Even if this enemy had attacked their people and ruined their homeland, they let him go. This was due to the sacred status of the qopuz for the Oghuz – music and poetry were linked to holy heaven.

The qopuz was a symbol of the sacred and whoever took it into his hand was connected to the untouchable. This was also the reason why the Oghuz so loved Dede Gorgud – a concentration of all they held sacred. Dede Gorgud contained knowledge of the divine and mediated between people and God, ensuring harmony in the Oghuz world.

The book established a link between the society’s physical and moral needs and the sacred energy of Nature (Land and Sky), tuning the human spirit to divine harmony. Thus, the aesthetics of the Oghuz were connected to their sacred values.

The men of courage in the saga found meaning in their personal lives by defending the public life of the society.

There was an unshakeable commitment by these warriors to sacrifice precious life itself, without hesitation, for their people, honour and motherland. In one episode, Uruz, son of the Oghuz military commander Salur Qazan, when captured by enemies, prefers death to dishonour when his mother’s honour is threatened.

The enemies fail to recognize Salur Qazan’s wife, Burla Xatun, among the 40 girls that they have taken captive. They plan to slaughter Uruz, cook his flesh and make the 40 girls eat it, thinking that his mother will refuse to eat and betray herself to them.

Uruz adheres to the code of Oghuz men of courage and gets a message to his mother, telling her to eat his flesh so that the enemy will not identify her.

As an ethnic epic poem, The Book of Dede Gorgud is rich in the humane and in humanitarian ideals. There is no prejudice towards other people with historical or cultural ties to the Oghuz. This national saga of the Oghuz, who protected their motherland as their ideal and who considered it an honour to go, even single-handed, against an enemy threatening their homeland, bears no hostility towards neighbouring peoples – Armenians, Georgians etc.

This approach applied equally to other religions, too. In the epic the Oghuz are described as believers in a Muslim God, but they never had a negative attitude towards Christianity, Judaism or other religions. The Oghuz who believed in God adopted Islam at a later stage and remained faithful to Islam’s concept of heavenly religions, respecting all heavenly religious as correct.

Religious tolerance, which was characteristic of the Oghuz mindset, is also refl ected in the epic poem. Salur Qazan’s son, Uruz, was hurt by the fact that his father still saw him as a child. His words “I will go to the bloody land of the Abkhaz[1] // 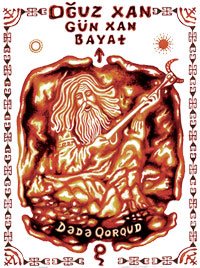 I will swear on the gold cross // I will kiss the hand of the priest who wears the Pilon[2] // I will marry the infidel’s black-eyed daughter” – do not arouse any sign of chauvinism in his father Salur Qazan and Oghuz beys.

Their only concern is Uruz’s claim to be a man of courage. “Christianity” “Judaism” and other notions were accepted as true faiths in Oghuz thinking and as natural developments in the world’s divine arrangement.

The Book of Dede Gorgud is a masterpiece from the world’s treasury of epic poems in terms of its artistic content, its poetic and linguistic features and for its humanity and humanitarian ideas. This literary landmark, whose 1,300th anniversary was marked by UNESCO as an international holiday in Baku in 1999, is a cultural phenomenon which encompasses the past and the present in the history of mankind, myth and history. While yesterday this majestic epic poem was a holy book of the Oghuz Turks, who contributed important pages to the history of Eurasia, today it is part of “the history of humane ecology” and teaches us secrets about living in harmony with nature.

About the writer: Seyfaddin Rzasoy is Head of the Mythology Department of the Institute of Folklore in the Azerbaĳani National Academy of Sciences and Deputy editor-in-chief of the “Dada Qorqud” scientific literary collection.


1. ‘Bloody Abkhaz’ - Abkhazia, in the Caucasus, located in present-day Georgia
2. ‘Pilon’ is the name in the Oghuz language for the vestments worm by Christian priests

420270
TravelSummer 2018
Zigh Salt Lake: The Eighth Wonder of the Absheron
by Tom Marsden

519140
BakuSummer 2017
PRESERVING THE PAST AT THE INSTITUTE OF MANUSCRIPTS
by Tom Marsden
more
SURVEY
Which subjects are you looking for on this website?
24%Arts & Culture
12%Food
34%History
6%Sport
24%Travel & Tourism
Number of votes: 740
VIDEOS