ENERGY SECURITY FOR EUROPE and regional security for the Caucasus? 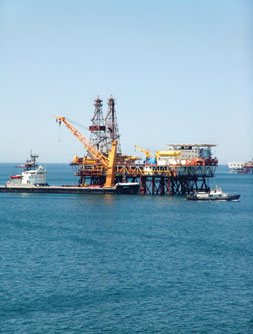 Azerbaijan’s oil and gas industries have advanced significantly since the regaining of independence. In the early 1990s, foreign companies began looking to invest in a country evidently rich in hydrocarbon resources and it now has a large say in global energy discussions. It is also the richest country in the South Caucasus, increasingly able to influence political processes in the region. Many analysts and politicians accept that energy is a key factor in any resolution of the region’s most complicated problem – Nagorno-Karabakh.

Besides its oil, the Caspian Sea is proving to have plenty of gas stored below its waves and some experts believe that Azerbaijan’s exports of gas will supersede those of oil. Recent discoveries in the Caspian will put the country further in the spotlight; of particular interest are the Shah Deniz and Umid fields, explored at the country’s own expense and the Absheron field, recently explored jointly with the Total Company.

Shah Deniz, discovered in 1999, is thought to be the biggest gas field explored in Azerbaijan. With reserves of 1.2 trillion cubic metres of gas, it is one of the biggest gas condensate reservoirs in the world. It is 70 kilometres south-east of Baku, on the Caspian Sea shelf, where the depth varies between 50 and 500 metres. BP operates Shah Deniz on behalf of its partners in the Shah Deniz Production Sharing Agreement (PSA). Operations are being conducted there in two stages. The first stage began in 2006 and is expected to reach extraction rates of 8.6 billion cubic metres of gas per annum (bcma) and approximately 50,000 barrels a day of condensate.

Despite the complexities of drilling the wells, building a platform, constructing an onshore terminal and laying a 500 km pipeline to Turkey, the first stage of Shah Deniz was developed in just seven years. It has, since 2006, proved to be a secure and reliable supplier of gas to Azerbaijan, Georgia and Turkey.

Shah Deniz Full Field Development represents stage 2 of the project, as well as an expansion of the South Caucasus Pipeline. It will deliver an additional 16 billion cubic metres of gas and up to 100,000 barrels of condensate, tripling overall production from the field.

Umid (Hope) is another of Azerbaijan’s larger gas fi elds. This was the first field the country explored using only its own resources and at its own expense. It is 75 km. from Baku and 40 km. off shore. The Umid Co. Ltd. was established by the State Oil Company of the Azerbaijan Republic (SOCAR) in June 2009 to work on the off shore structure. SOCAR has an 80 per cent share and Nobel Oil Exploration & Production owns 20 per cent. The first exploration well indicated that the field holds 200 billion cubic metres of gas and 30-40 million tons of condensate. Umid will be a large source of income and, together with other new wells being explored, it will help Azerbaijan to maintain its dominance of regional gas routes. At current market prices, Umid is expected to bring in $40-50 billion; this is three ti mes Azerbaijan’s state budget. The fact that the State Oil Company achieved this under its own steam is just one more positive feature of the project. 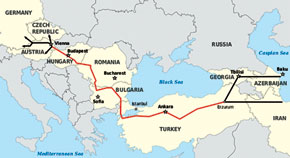 As well as its own reserves, Azerbaijan off ers advantageous routes to other Caspian Sea countries for exporting energy to the west. It is clear that those countries already understand how important the southern gas corridor is for them. At a summit of Caspian Sea countries’ presidents that took place in Baku, President Gurbanquly Berdymuhammadov of Turkmenistan emphasized the importance for his country of the gas transportation route to Europe via the Caspian Sea and Azerbaijan.

There is also a leading function for the country in the projected Nabucco, TAP and AGRI pipelines, as well as on other export routes. With the addition of the Umid field, it will be possible to export 10 billion cubic metres of additional gas annually for a period of 25 years. This volume of exports would necessitate an additional gas pipeline after 2020. Although, Russia and Iran have some of the world’s largest reserves of gas, the European energy market does not currently wish to be dependent on either of them. Turkmenistan, another large producer, has very limited access to Western markets. These circumstances increase the interest in Azerbaijan’s reserves, including those in the Umid field.

On 9 September this year, President Ilham Aliyev announced the discovery of a large gas fi eld in the Absheron block of the Caspian Sea. First Vice President of SOCAR Khoshbakht Yusifzadeh said that the Absheron structure was discovered in the 1960s by Azerbaijani geologists, but at that ti me it was impossible to go further because of its depth under water. Nowadays, however, the new oil strategy has created greater possibiliti es; on 1 August 1997, during an official visit to the US by President Heydar Aliyev, a Production Sharing Agreement (PSA) was signed between SOCAR and the Chevron and Total companies to explore, develop and extract from the Absheron block. The contractors then conducted three seismic studies of 634 square kilometres of the block and drilled an exploratory well to 520 metres in the southern section. For technical reasons, however, the well was capped and the PSA was terminated in 2005.

Despite this setback, local geologists and SOCAR staff continued in their belief that there were productive strata in the field, and they were supported by foreign partners. Thus a second PSA was concluded between SOCAR, the French Total E&P Absheron b.v. and a partner company on 27 February 2009. SOCAR’s share was 40 per cent, Total had 40 per cent and Gas de France had a 20 per cent share. The Absheron block lies 85-100 km south-east of Baku in 350-550 metres of water. The contractual area covers 747 square kilometres. Exploration produced positive results; SOCAR’s initial estimates indicate potential reserves of 350 billion cubic metres of gas and 45 million cubic metres of condensate. 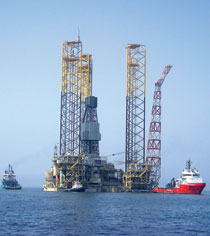 As well as supplying the domestic market, these finds inevitably lead to the search for new markets and the implementation of new projects to export the gas. Azerbaijan has already formulated plans for a Southern Gas Corridor.

As President Aliyev stated:
There have already been several years of discussion and concrete steps are being taken towards a Southern Gas Corridor. A memorandum on energy cooperation between Azerbaijan and the European Union was signed as early as 2006. In January this year, a joint declaration on the Southern Gas Corridor was signed by Azerbaijan and the European Union. This declaration is not simply an expression of intent, it is a specific document; a working group has been established and it has been working very effectively. This will also represent a new stage in relations between Azerbaijan and Europe. When we say Southern Corridor, we mean all the projects that will be realized in a westerly direction. There are many such projects and, in my opinion, it would not be correct to distinguish between them. However, some countries in Europe support one project. For us, in fact, there is no great difference. When we say Southern Corridor, we mean NABUCCO, as well as the Turkey- Greece-Italy and Trans-Adriatic projects.

The South Stream project is supported by almost all European countries and most have joined the agreement related to this route. It is estimated that 60-65 billion cubic metres of fuel will be sent through South Stream after it comes into operation in early 2013. It is estimated that by 2020, the annual demand for natural gas from countries of the European Union will reach 620 billion cubic metres, 500 billion cubic metres of which will be imported. The North Stream, Blue Stream and South Stream gas pipelines, sourced by Russia, are together forecast to supply 160-170 billion cubic metres; still not enough to meet European demand, thus the necessity for alteroffshore native pipelines. In other words, even if South Stream is constructed, it will not fully meet the EU’s requirements and other pipelines will be needed. That is why the projects planned to the west should not be seen as competitive routes, but should be regarded as diversifica- tion. They were discussed during the visit by the Head of the European Commission, José Manuel Barroso, to Azerbaijan earlier this year.

The president stated in a speech:
The realisation of the Southern Corridor will open additional opportunities for new investments in the gas sector and production will be accelerated in the most prospective field in Azerbaijan. Most importantly, the exploitation of the second stage of Shah Deniz, of so much interest to all the countries, will begin. This will launch a gas boom in our country and will give an impetus to expanding fuel exports to many European countries. If the Southern Corridor project takes off, there will be wide-ranging opportunities for our foreign partners to invest in the second stage of Shah Deniz: they will supply the greatest share of investment. They have estimated that this will amount to about 20 billion dollars. Of course, Azerbaijan will benefit from this. With these projects in place, gas production in Azerbaijan will increase by 16 billion cubic metres, to more than 40 billion in total. 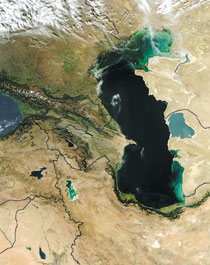 The Caspian region. View from space

Plenty of gas to go

In 2012, Shah Deniz is projected to produce 18 billion cubic metres of gas, a large part of which will be transported to Europe. The number of states purchasing gas from Azerbaijan will rise substantially. Greece, Bulgaria, Italy, Romania, Poland, the Baltic States, Hungary, Slovakia and other countries are among those expected to receive fuel from the Caspian in the coming years. From 2015-2020, at least 20 billion cubic metres of gas will be piped to Europe. Other prospective fields, such as Bahar, Inam, Alov and Umid, have deposits of more than 2-3 trillion cubic metres. Assuming that the country will produce 15-20 billion cubic metres of gas annually, these resources should be sufficient for 100, or even 200 years. This raises the possibility of exporting gas via other routes, in addition to the Southern Corridor. In line with its multi-directional energy policy, the government has included the transportation of fuel via Nabucco, Turkey-Greece-Italy, Trans-Adriatic and other pipelines in its long-term plans.

A further option is for the countries of Central Asia to join these projects in the future. The possibilities of collaboration with Turkmenistan and Kazakhstan are being discussed. Only time will tell whether these initiatives succeed. John Roberts, of Platts agency, while emphasizing the importance of Turkmen gas for the project, noted that,
in contrast to the proactive position of Azerbaijan, Turkmenistan remains passive.

He said that Azerbaijan is active in the search and development of gas resources, in finding ways to get them to the world market and in the realization of these routes; in contrast, Turkmenistan is passive, waiting upon op- tions proposed by others and it does not give the necessary support to routes that are proposed. As for Kazakhstan, Mr. Roberts questions whether it will be active or passive here and notes that, again, time will tell. In general, he stressed that Azerbaijan is conducting the most stable and consistent oil and gas policy in the region, indirectly making it an example to other countries in the region.

The success achieved at the Shah Deniz, Umid and Absheron gas fields has strengthened Azerbaijan’s position in the project to ensure energy security for Europe. There are great expectations of the Caspian region from Europe in light of its desire to reduce energy dependence on Russia. At the same time, Azerbaijan has its own expectations of the West. At a time when negotiations on the Nagorno-Karabakh conflict are at a decisive stage, the success of the Umid and Absheron gas fields is of great importance for our state. Huge political dividends may be reaped from successes in the economic sphere; in particular, hopes rise for the negotiations to resolve the Nagorno- Karabakh situation. May these hopes be justified...

About the author: Murad Mehdiyev is a lawyer, Saarland University LLM