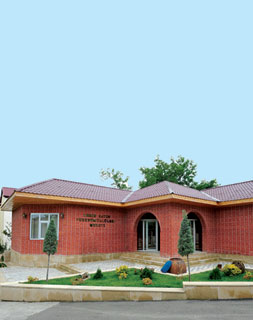 The Museum of Longevity. Lerik district
There is a museum in the Lerik region on Azerbaijan’s southern border, a museum dedicated to centenarians, the only one of its kind. One might well question the necessity of such a museum - and why in Lerik? We will come to that. Meanwhile, please allow me to introduce the region.

Azerbaijan enjoys natural and mysterious abundance. Every nook, every region and the splendidly rich flora and fauna intrigue all who pass through. Let’s take the venerable Talysh Mountains with their unique trees, pure water, green forests, rocks and historical monuments, the Emerald of Azerbaijan, and the region of Lerik at the foot of these mountains. Words, indeed, are not enough to convey the beauty of this land. There was a time when illustrious and courageous travellers compared it to the world’s most beautiful and picturesque sites. The French writer and traveller Alexandre Dumas, French archaeologist Jacques de Morgan, the Russian traveller Ilya Berezin and others commended the nature and people of the land in their memoirs and travel notes. B. Berg spoke about the environment of the villages of Jangamiran, Shingadulan, Hoveri and Veri in his book Memories (1836) and academician A. A. Grossgeim described the impenetrable forests and unique trees and plants of Lerik in his book In the Talysh Mountains.

The late Y. Sinkevitch, who was actually a doctor but who also presented the popular Soviet era show Cinema Travels Club, prepared a series of programmes about Lerik and its centenarians. Many articles in the On Land and Sea collection, famous in the USSR, were dedicated to the secrets of long life in Azerbaijan.

We should point out that this land, which used to be Zuvand, has been called Lerik since 1937. It covers 1,084 square kilometres, 39,000 hectares of which are emerald forests. The region has 157 residential settlements. There are 142 historical monuments – holy places and sanctuaries - and they are being preserved.

Lerik undoubtedly has a colourful and fascinating environment; its magnificent mountains, rivers and waterfalls are breathtaking. While in its west the air already carries a hint of snow, fruit is still being harvested in its east. When it is raining cats and dogs in the north, there is drought in the south. When you are frozen to the marrow in one corner, you scuttle into shade in another. When the grass is brown in the lowland, it is still green in the summer pastures. The region has five types of climate depending on geographical location and relief. Leningrad (now Saint-Petersburg) biologists who mounted expeditions to Lerik between 1965 and 1970 described their astonishment at this land of miracles: It has a very strange nature. The weather changes almost every kilometre….

That is the nature of the region known as the land of centenarians. The oldest people on the planet: Mahmud Eyvazov, Shirali Muslumov and Majid Aghayev came from this region and lived through decades and decades. One wonders about the secret of such long life. 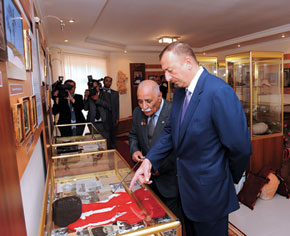 President Ilham Aliyev at the Museum of Longevity

Scientists who have conducted lengthy research in Lerik, have tried to explain it by the environment, the pure air and water and the rich flora. These ideas have been shared by eminent intellectuals, scientists, poets and writers. People’s Writer Suleyman Rahimov wrote, after one visit:

I have travelled to many places in the world. However I am amazed by the contrasting nature of Lerik and Astara. There are very few such picturesque, scenic and charming places as Lerik. Nature is not often as generous, abundant and loving as it is there… The miraculous nature of your lands is an infinite source of inspiration and unique pictures, as if drawn by the hand of God. I imagine people from here used to live thousands of years….

And here are the words of academician and Honoured Scientist Hasan Aliyev about the region: In spring the Talysh forests remind one of a parfumerie… The mineral springs located in the magnificent settings of the Talysh Mountains should be turned into sanatoria for our people… In order to preserve the relict flora and fauna of the Talysh Mountains, the area should be made a national park or a natural park, like the Carpathian Mountains. The abundance of mineral and other drinkable waters should be the source…

Academician Mirali Qashqai wrote in his memoirs: The rich and contrasting nature of the Talysh Mountains was like a wonderland. The secrets of these mountains have still not been completely disclosed. These lands can be a great school of experience for future scientists. It is a sin and a crime to remain indifferent towards these precious riches and unparalleled beauty…

Honoured Scientist and Doctor of Medical Science, Professor Shukur Hasanov, also suggested a search for the secret of such longevity in the nature of the region: Why is Lerik seen as a land of centenarians? Is it their achievement? Never! They live in a healthy environment. The air in this region heals, its waters are ointment and its plants are pure medicine. Its soils are bountiful – so many riches appear there. Its honey, cream… all the natural foods and beauties are the basis of good health. Nature heals people here without their noticing, with its sun rays, water, air, plants and emerald forests… Of course, people who breathe mountain air begin to resemble a mountain themselves. A healthy environment means a healthy life. And health is happiness…

Yes, there is no equal to the miraculous nature, abundant flora and fauna, climate, water and air of Lerik. However, the greatest wealth and source of pride for this region are the sturdy, hardworking centenarians, who live with their love of building and creating and are witnesses to two or three centuries. There were times when there were more than 500 centenarians in the region. Currently there are more than 20 who have passed the century-mark in Lerik. 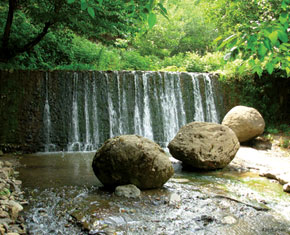 A view of Lerik district

The region’s centenarians have also entered the Guinness Book of Records. It is true that there have been many in the Caucasus who have celebrated their 90th or 100th birthdays. However, only in Azerbaijan, in Lerik, do people celebrate 120, 140 and 150 years of life. In this light, the establishment of a Museum of Longevity there should not be regarded as a coincidence, but a logical law of nature.

In 2010 the Museum moved to a new building, constructed using traditional elements of architecture. It has two halls and over 2,000 exhibits on display, including interesting information and photographs of more than 50 of Lerik’s centenarians. During a visit to the region on 25 June 2010, President Ilham Aliyev participated in the opening ceremony of the new building and he studied the exhibits in this cultural centre.

The exhibits include a portrait of Shirali Muslumov, a resident of Barzavu village who lived 168 years, and a number of items associated with him (a silvery hat that he wore for more than 100 years, the silk shirt presented to him by Ho Chi Minh, former head of the Republic of Vietnam), books about him, newspaper and magazine articles, television footage and others are of great interest.

Director of the museum Dilara khanim Fatullayeva said that Shirali Baba (baba – term of endearment, literally grandfather- ed.) married a 57-year-old woman when he was 136 and they had a daughter. Dilara khanim also said that there were many unique museums in the world; there is even a Museum of Tombs in one country or another. However, our museum is not about death, but about long and happy lives.

Another interesting corner is dedicated to Mahmud Eyvazov, who lived to the age of 154. There is a wealth of interesting information about this respected elder, who spent all his life with nature and the great mountains and who was as old as the famous Russian- French battle of Borodino (1812). There is a television film, made approximately 50 years ago; the book He is 150 years old, in Bulgarian and Russian; photographs from his meetings with school students from Moscow and Baku; scientists and people associated with the arts; personal belongings etc.

Majid Aghayev who lived 136 years, the 128-year-old Abdul Huseinov, Molla Hasrat Melikov who lived 125 years and the 120-year-old Nani Ahmadova are among the other personalities featured in the museum; the documents and exhibits reflecting their lifestyles are also of great interest.

The exhibits that adorn the Museum of Longevity in Lerik also include works by some of these ‘mountain eagles’: socks woven by 117-yearold Veli Aghayeva, a carpet woven by Lale Azizkhanova at 107, wooden plates and a hovsar (a special plate to separate grain from the husk) by the 105-year-old Feyruz Huseinov, a woollen shirt woven by 105-year-old Nigar Huseinova etc. 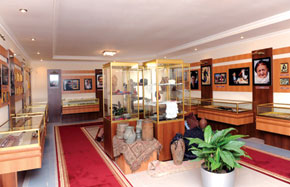 Inside the Museum of Longevity

Another section of the museum exhibits various tools used in cultivation and pottery, calfskin bast sandals, women’s and men’s wear, chests, boxes, cradles and other household implements once used by the centenarians of Lerik and donated to the museum. These examples of material culture create a full picture of the life styles of these people and also illustrate the traditional industries and cultural life of the region.

Despite the fact that most of these centenarians are no longer with us, their portraits are expertly presented. The French photographer Frederic Lachop, responsible for 40 of the photographs, displayed them at an exhibition, In the Land of Centenarians, in Paris. The same exhibition was later shown in Baku and then again in Paris. In 2007, the Ambassador of France to Azerbaijan visited Lerik with his spouse and presented the collec- tion of 40 photographs to the museum. There are special displays dedicated to Shirali Muslumov, Mahmud Eyvazov and Majid Aghayev who are thought to be the longest stayers on the planet. There is no doubt that the museum will attract more travellers to Lerik, which has great tourist potential, and will contribute to its development.

Some of the centenarians featured in the museum are still alive. The list is headed by 113-year-old Mahbuba Fatullayeva. This lady, whose life has spanned three centuries, was born in 1898, and in 2008 her 110th birthday was celebrated formally on the initiative of the museum administration.

Other Lerik centenarians still with us include 108-year-old Saringul Rustamova, 104-year-old Eminagha Mammadov, 103-year old Aghabeyim Mammadova, 102-year-old Nanakhanim Mammadova and the 101-year-old Gulsuma Lalayeva, Gulsaray Hasanova, Ruqiyya Guliyeva and Abutalib Movlanova. Despite the fact that they are all more than a century old, they feel wonderful and still carry out their daily household chores.

According to director Dilara khanim, in Soviet times centenarians were afforded special care and atten- tion and most were assigned personal doctors. For example, the 154-year-old Mahmud Baba had a personal doctor, Balagha, who still speaks fondly of Mahmud Baba and his personality. By the way, we should mention that Doctor Balagha, a close observer of the lives and lifestyles of the Lerik centenarians, has published a book If Anyone Doesn’t Live a Hundred Years… dedicated to the secrets of the centenarians. Among those secrets, besides the ecology, natural-geographical and climatic conditions, he also lists horse riding in the fresh air and a healthy diet.

About the author: Tahir Shahbazov has a PhD in history and is a senior research associate at the Institute of Archaeology and Ethnography of the Academy of Sciences of the Republic of Azerbaijan and the author of books and articles about the ethnography of the country.