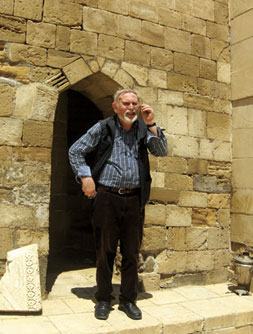 German naturalist and traveller Engelbert Kaempfer (1651-1716) was born in Lemgo and travelled to Russia, Azerbaijan and Iran as secretary of the Swedish embassy. He did not return to Europe. Raphael du Mann (1613-1696), who worked as a translator in the Safavid shah’s palace and exercised great authority, proposed and insisted that he enter the service of the Dutch fleet in the Persian Gulf, thus Kaempfer visited different Eastern countries during his ten years of service.

Kaempfer travelled around Iran and Azerbaijan before visiting Bender Abbas in 1685, Colombo in 1689 and Bangkok in 1690. He lived in Japan from 1690 to 1692. He was even jailed by the Japanese. He was the first to deliver information about Japan, its history, geography and ethnography back home; he published a book, History of Japan in 1712 after returning home.

The traveller wrote extensively about Azerbaijan in his works. He was in Baku in 1683-84 (December-January) and wrote a detailed description of the city. He included valuable information about the oil and salt mines of Baku, burning gas in Absheron, the economy, social life, architecture and conditions of life in Baku and Absheron. The information he provides about Absheroni oil wells in the second part of his book is especially interesting. Kaempfer detailed the characteristics of the Caspian Sea, the flora and fauna of its surroundings, its economy, as well as the structure and economy of the Caucasus Mountains. He was also one of the first European researchers into the eternal fires. The pictures and engravings, the map of the Absheron Peninsula and the images of Shamakhi and Baku attached to his book are of special significance. Kaempfer returned home in 1693 and published his works in Latin in five volumes in 1712.

Eminent scientists such as Vladimir F. Minorsky, Ilya Petrushevsky and Sara Ashurbeyli often quoted Kaempfer in their research papers. Ilya Berezin, the professor of Kazan University who visited Baku in 1824, much later than Kaempfer, wrote as if to confirm his observations:
The Baku Tower is indeed surrounded by double walls. The wall is single on the sea side.

German scientist Dr. Lothar Weiss, researcher into the works of Engelbert Kaempfer visited Baku from 22-31 May 2011.

Besides participating in an international symposium organized by Khazar University in Baku from 27-29 May, he also intended to follow the route in Azerbaijan as travelled by Kaempfer from 1683-84 and visit several of the country’s regions. He brought with him several documents about ancient Baku which were unfamiliar to us, as well as copies of Kaempfer’s maps, plans, diary notes and comments, and even a book published about him. 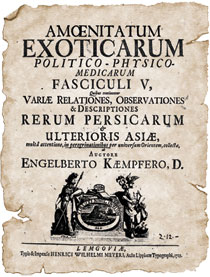 Dr. Weiss is an eminent scientist who studies Kaempfer’s legacy. He even moved to Lemgo, where Kaempfer was born, to further his studies. He has created an Engelbert Kaempfer archive in Lemgo’s central library and is still the head archivist there. Kaempfer’s Latin manuscripts were donated to the British Museum from the personal archive of the wealthy 18th century benefactor Sir Hans Sloane. Dr. Weiss is the only person able to work with these documents. He has studied these manuscripts and translated them from Latin into German and English. He has become famous in Japan for his translations of Kaempfer’s History of Japan from Latin into German and English.

Dr Weiss brought us copies of Kaempfer’s field journals, manuscripts and unique documents, which are held in the British Museum’s archive. It was most interesting to follow the original 17th century route.

Our first destination was Shamakha [130 kms west of Baku]. We were accompanied by Jafar Qiyasi, architect and Associate Member of the National Academy of Sciences of Azerbaijan. Kaempfer had travelled to the city in the winter of 1683. He met the Shamakha ruler of the Safavid period, Muhammad Hussein, and stayed with him. He wrote detailed descriptions of several meetings he had in the city in his manuscripts. He even described the epigraphic inscriptions on the monuments he had seen. In order to avoid mistakes while copying, he had a mullah copy down the texts of the epigraphs for him. He made a drawing of the city which has never before been published. According to his notes, he stayed in two caravanserais on the road from Shamakha to Baku and visited the Diri Baba shrine in Maraza. We were able to find the remains of only one of those caravanserais in the centre of Maraza after a long and thorough search. We also visited the Diri Baba shrine and continued our trip. In Shamakha we were met by local scientist, Professor Seyfaddin Ganiyev. He told us of the history of the city. We visited the inner fortress wall, Gulustan Fortress, and the Sheikh Khandan and Yeddi Gumbaz (Seven Dome) graves.

Then we turned south-east to the Pir-Hussein [Hussein’s shrine] dervish house in Hajiqabul region. This time we were accompanied by Seyran Veliyev. Dr. Weiss checked every detail noted by Kaempfer about the dwelling. The earlier traveller had described everything in the finest detail in his manuscripts, including the number of merlons on castle walls and steps in the minaret. He had noted especially in his manuscripts that the Pir-Hussein dwelling was a very significant sanctuary. Dr. Weiss was overjoyed by the Hajiqabul trip and expressed his gratitude and satisfaction in the honorary guest book. 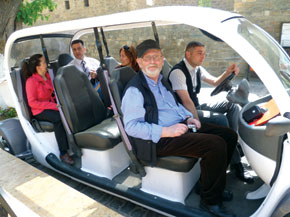 For our third trip we headed north to the medieval city of Shabran, near Gandob village on the Baku-Quba highway. Professor Tarikh Dostiyev accompanied us on this trip and informed our guest of the history of Shabran. Dr. Weiss recalled that when Kaempfer was there he wrote that there was a temple to Alexander in the city. He had been very glad to hear this because he was much informed about Alexander the Great, who was clearly renowned in Azerbaijan. There is a drawing of the temple’s layout in Kaempfer’s manuscripts. Of course, this information is vital to studies of the history of Shabran.

The fourth trip was around the Absheron peninsula [the ‘beak’ jutting into the Caspian Sea]. This time archaeologist Idris Aliyev accompanied us. We followed Kaempfer’s itinerary around Absheron, as described in his manuscripts, and visited the Qala Reserve, Ateshgah [fire temple], Yanar Dagh [Burning Mountain], the salt lakes, Absheron’s defence fortifications and other monuments. The images and engravings, the map of Absheron Peninsula and information about and descriptions of the oil wells and fauna of Absheron in his writings are of huge significance. Dr. Weiss noted that Kaempfer had travelled through Absheron in one day after Baku. He had spent the night as a guest in one of the houses and had then returned to Shamakha. He described the house where he stayed in the village of Bina in great detail. He spoke of the beautiful carpets on the floors, the silverware in the niches and people’s traditional dress; all very interesting ethnographic information. He conversed much with a fire-worshipper, a Hindu merchant from Multan (at present a city in Pakistan’s Punjab province) whom he had met near Ateshgah in Surakhany village. He noted in his manuscripts that although Azerbaijan was a Muslim country, there were many colonies of Hindu merchants.

We then headed south again to Qobustan which was described extensively with graphic images and notes in Kaempfer’s manuscripts. Archaeologist and researcher into Gobustan, Firuza Muradova was with us to fill our guest in on its history. Dr. Weiss was amazed by the Gobustan Reserve and gently stroked the prehistoric petroglyphs. He also spoke about Kaempfer’s notes on the area. 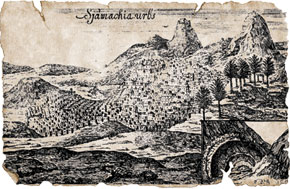 After these trips, Dr. Weiss proposed a walk in Icheri Sheher [Baku’s old Inner City]. He told us that Kaempfer had travelled from Shamakha to Baku together with 5 horsemen in two days and had visited Baku and Absheron on 6-8 January 1684. Despite the difficult wintry weather conditions he had captured information about all the architectural monuments along the road. His arrival in Baku caused quite a stir, because one of the people accompanying him was a black man. He noted that the ruler of Baku at that time had the title of Sultan. Kaempfer was arrested because he did not have the decree permitting entry to foreigners. We also found the place where he was held, from the description in his manuscripts. It was the ground floor of the Multan caravanserai. He escaped, toured the entire city in one day and made a drawing of it. Scared as he was, he had tried to note all the architectural monuments he saw, even on his knees, as he described it. This is what he saw [and can still be seen] on the northern (double) gate of Icheri Sheher:
The two lions standing face to face protect the tower walls day and night, under sun and moon, while the bull’s head in the middle protects the state.

It is also worth noting that while carefully researching with Dr. Weiss Kaempfer’s drawing of Baku, it turned out that the mosque near Maiden Tower had a minaret. This mosque is the oldest in Icheri Sheher. It was discovered in 1998 during excavations led by archaeologist Farhad Ibrahimov near the Tower. The mosque and its minaret, thought to date from the 9th century, had been drawn by Kaempfer in the 17th century. Until now we had thought the remains of the minaret were part of Maiden Tower. The discovery of a minaret in this area is very important for research into the history of ancient Baku.

Inspired by Kaempfer’s descriptions in the manuscripts and by the beauties of the sacred land of fire, Dr. Lothar Weiss announced the necessity of writing a book about his trip to Azerbaijan and proposed that I be his co-author from the Azerbaijani side. A memorandum was signed to produce two books in two years. The first will be Kaempfer in Azerbaijan and the other – Kaempfer in Baku and Absheron.

The publication of these two books will help to shed light on the history of 17th century Azerbaijan. The books will describe in detail the country’s cities, art and trade routes. One will include valuable information on Baku city, its strategic position, the islands located in the Caspian Sea and the area’s economy, the place-name of Baku and Kaempfer’s interpretation of the Baku coat of arms, as well as the images and engravings, the drawings of the temple to Alexander that used to function in Shabran and the Pir Hussein dervish house, the map of the Absheron Peninsula and the images of Shamakha and Baku in the manuscripts, never published since then.