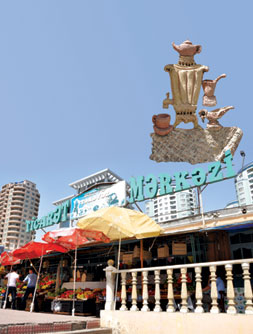 Even if the bazaar is barely noticeable and on a busy highway, you can’t help stopping by. The reason being the enticing aromas that emerge. Baku bazaars are a true paradise for epicures, for all their five senses. This article is about the sense of smell. The feast begins with the arrival of spring. Even if you don’t need anything, you still go to the bazaar to enjoy the scent of fresh herbs. These juicy herbs come in handy after winter and it is usually from the greengrocers’ stalls that the people of Baku set off on their tour.

Anit Veske, a tourist from Austria, asks in surprise while walking round a Baku bazaar.

You have nothing like that. How can bazaars be so boring?

And she is right. Baku bazaars may not be as exotic as those in Bukhara, Samarkand or Beirut. You can’t see cock or ram fighting here. This is not a place for the tourist to come to appreciate the spirit and style of the city and nation. Bazaars in Baku are not what they are in Bukhara or Cairo, Istanbul or Damascus, where a bazaar is part of city life, with dozens of handicraft shops, merchants, circus performers and players; where people may have fun, enjoying the skill and dexterity of rope-dancers, as well as buying fruit and vegetables for home.

But Baku could have turned out like Cairo. In the 1950s there were plans to establish a gigantic bazaar in the centre of the city. The bazaar was to be reminiscent of the markets of Damascus and Bukhara. Under Brezhnev’s leadership, the Soviet government wanted to create bazaars in every capital of the Soviet Union’s republics to show off their agricultural achievements and handicraft shops. But the idea never materialized due to the high cost and a lack of outstanding achievements. So the promising idea of setting up a pavilion for the shooting of another series of 1001 nights in Baku was doomed to fail. For their variety of fresh vegetables, fruit and spices, however, Baku bazaars are no worse than the more exotic ones.

Within walking distance of the Old City (Icheri Sheher), right at the heart of the city’s historical quarter, there is the Passage Bazaar. 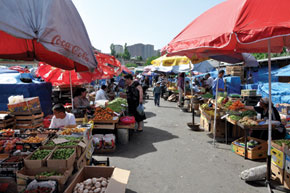 General view of the bazaar
It is not the oldest bazaar in the city and it derives its name from the first oil boom at the dawn of the 20th century. Only a kilometre away there is an even older bazaar, called Komurchu Bazari (Coal Bazaar). As was the case in the past, there are still numerous handicraft shops there, as well as shops selling charcoal and coal.

Up the road from the Heydar Aliyev Palace, there is one of the oldest Baku bazaars, called Teze Bazaar. This one is about 80 years old and is best known for the availability of fresh sturgeon and other seafood from the Caspian, as well as the wonderful black caviar. The Sharg (Oriental) Bazari is close to the central railway station. It fully lives up to its name, both in terms of its architecture and in the assortment of merchandise. There are bazaars in almost every district of Baku and settlement of Absheron.

A bazaar means a plethora of aromas. There are counters where only herbs are sold, and they smell like alpine meadows in the morning. Right next to them are counters selling tomatoes, apricots, peaches and other fruit. There are also spices from China to Iran. After relishing aromas characteristic of any Indian shop in London or Berlin, we approach the most aromatic of all produce – melons. Many might think that the most flamboyant shops would be those selling spices. But the melons in Baku’s bazaars have a very special and mysterious aroma, comparable with any spice. Melons of different types are available in Baku, and they compete with each other to lure the customer with fine appearance and enticing scent. You may come across all the most popular types of melon: Persian, Spanish, honey, marble, Japanese, even cantaloupe nutmeg melons, not to mention the well-known casaba and melon shrub, also known as melon pear s. And of course, the delicacy known as the Shark Fin factor. Salesmen are highly unlikely to tell you much about these kinds, so the best way of choosing a melon is to smell it. The smell of a melon is very informative and will never mislead you. It will provide you with accurate information about the fruit’s maturity, taste and freshness. Those not asking too many questions and preferring to examine the fruit and vegetables themselves, and knowing how to do that, enjoy special respect in the bazaars. When asked whether her apricots were fresh, one saleswoman gave a wonderful and, most importantly, precise answer: 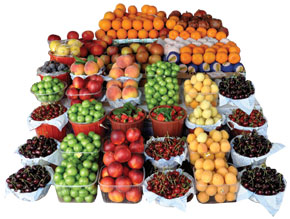 Don’t make me lie to you.

And she was right. It is always best to smell a melon and other fruit before buying them – ripe fruit will have a wonderful smell, whether it is a melon, peach, apricot or tomato. Just smell them and sellers will be grateful to you for not making them lie and making up your own mind. If you have made the right choice, you will be looked upon with respect – it is always nice to deal with a connoisseur. Such people don’t usually bargain much; what matters most to them is quality. From this standpoint, Baku bazaars are a good indicator of people’s well-being. An ever-increasing number of customers don’t care about the price and are only concerned about quality. Supermarkets in Baku now have tomatoes, bananas, apples, kiwis, melons and even water-melons throughout the year, but epicures can hardly be deceived. They only buy fruit and vegetables at bazaars and in season – they are cheaper and, most importantly, the produce should be fresh.

The most aromatic melons include the lemon-yellow type with a soft pulp vanilla in colour, the Bukhara variety, the Bargi 816 with the elegant smell and taste of pear, and the Sari Gulyabi. The Collective Farmwoman is perhaps the most recognizable and favourite of the early varieties. The Chardzhou, brought from Turkmenistan, is also extremely tasty. Turkmen melons have been known in the Caucasus and Arab countries since the 7th century. Turkmenistan also offers the popular Gulabi and Vaharman melons, which can be bought at Baku bazaars in the heat of summer. The abundance of aromatic and juicy melons has given rise to the spread of melon juice, a highly popular drink in Absheroni seaside resorts.

Almost every fruit of Azerbaijan’s abundant summer deserves its own story. Many connoisseurs are likely to argue that the peach counters should be described as the most aromatic. Instead of picking up the argument, let’s move on to the meat section. It may seem that it is sight, not the sense of smell, that one should rely on in choosing meat. But experts will tell you that the sense of smell is as important, especially if you are buying lamb. One of Sultan Abdurashid’s chefs is believed to have said that all people can be divided into two categories: those who can determine whether meat is fresh, and those who cannot. The latter usually eat insipid dishes and can’t understand why they are so unlucky. 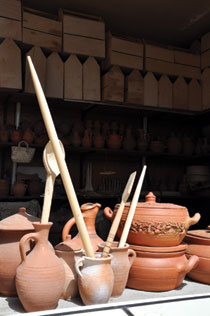 The easiest and oldest known way of finding out whether lamb is fresh is to detect a suspicious smell. The smell of mutton will tell an experienced cook as much as a wine’s bouquet tells a winemaker. So don’t be taken aback if you see people peering at meat or smelling a hanging carcass. One should make a small incision and press on it with your finger. This is how the freshness of meat was tested by the epicurean sultan’s chef. The colour and smell will tell you everything you need to know and the resulting small dimple will fill out very quickly if the meat is fresh. If not, someone is trying to sell you stale meat.

….or one who knows

Observing epicures, tasters and other connoisseurs of the great art of selecting provisions at a bazaar is not only a highly enjoyable experience. It will also enrich you with the knowledge you will never gain from shopping in a supermarket. And this is the greatest advantage of Baku bazaars – there are many experts walking about and if you follow them for some time, you are sure to become a connoisseur, too. You will thus earn the respect of salesmen who always appreciate a true epicure. But don’t expect them to show their response, because they won’t want to frighten away lay people. A layman must think that only the salesman possesses the ancient art of selecting merchandise at a bazaar. Only a salesman can be consulted on the quality of a product and be expected to tell you honestly that the apricots brought in a week ago have just arrived, while the sheep slaughtered last week was enjoying fresh grass only an hour ago.

Just watch the experts and you will buy good meat from a healthy animal. Who are gourmands? Gourmands are those who can buy excellent products from a bazaar and make delicious meals from them - not those who know a few nice restaurants in town.

420180
TravelSummer 2018
Zigh Salt Lake: The Eighth Wonder of the Absheron
by Tom Marsden