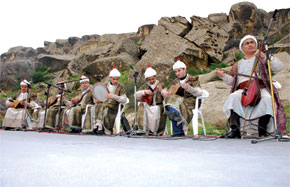 Azerbaijan is a country of many cultural offerings, among which perhaps the most notable is its rich musical tradition. From the ancient tradition of mugham to modern jazz, the nation has long been home to a variety of musical styles and has given birth to a considerable number of talented musicians, composers and conductors. In Baku, the best place for a crash course in the country’s musical history is the State Museum of Azerbaijani Musical Culture, at 4 Reshid Behbudov St. The museum’s displays, just a fraction of the more than 50,000 items in its collection, offer a glimpse into Azerbaijani music and showcase the truly diverse nature of its history. Museum Director Alla Bayramova, PhD, was gracious enough to give the author a tour of the museum, adding her expertise to the displays and making for a fascinating lesson in Azerbaijani musical culture.

There are of course many Azerbaijani instruments that are still part of today’s thriving culture. At the museum you can learn about the evolution of the tar, whose construction was altered by the great 19th century Shusha musician Mirza Sadiq, known as Sadiqcan. Sadiqcan’s modernized tar is now the common form in Azerbaijan, while the older form still prevails in Iran. You can also view a variety of bowed kamanchas, a fascinating instrument for anyone interested in the evolution of Western stringed instruments. With an endpin and four strings, it looks strikingly like a miniature cello. The saz, the lute-like instrument played by Azerbaijan’s ashugs, is also well represented in the displays.

The instruments are accompanied by a vast assortment of photographs and personal possessions of the great mugham musicians and ashugs of the past. Photographs of ashugs, the bards of Azerbaijan, in traditional dress, transport one back to earlier ti mes and communicate a sense of the deep historical and cultural role music holds in Azerbaijan. 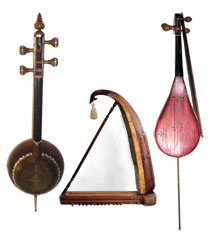 Kamancha, Chang, Chagane
Further curiosities include old albums advertising ‘Tatar Romance’ and Sadiqcan’s elaborately carved pipe. One section of the museum is dedicated to instruments of other cultures gift ed by foreign visitors. This colourful corner includes everything from modern European stringed instruments to gigantic harps from India and drums from Africa.

A history of firsts

In addition to a rich culture of traditional music, Azerbaijan has produced many great composers and musicians of classical music. The father of Azerbaijani classical music, Uzeyir Hajibeyli, produced Azerbaijan’s first piece of composed music in 1908. Hajibeyli started Azerbaijani composition off ambitiously with the Middle East’s first opera, Leyli and Majnun. This seminal work combines traditional elements of Azerbaijani mugham with western classical style, creating a sound that is distinctly Azerbaijani but accessible to all classical music lovers. Another great figure in Azerbaijani musical history, and Hajibeyli’s former classmate at the Pedagogical Seminary in Gori, Georgia, was the composer Muslim Magomayev, who is remembered as one of the first Azerbaijani composers (2 operas: Shah Ismayil, Nargiz.) Other figures in the Azerbaijani classical pantheon include Sultan Hajibeyov, Fikret Amirov, and Gara Garayev, about whose life the museum has recently published a documentary history.

Azerbaijan’s music history is a history of firsts. Hajibeyli wrote the first Middle Eastern opera and in 1914, performing in one of his operas, Shovket Mammadova risked her life to become the first Muslim woman to perform on stage. Furthermore, the great Azerbaijani singer Bülbül was the first Muslim singer trained in bel canto. The pioneering spirit of Azerbaijani music has led to exceptional composition. Gara Garayev and Jovdet Hajiyev were two of only eight students taken by Shostakovich, and Garayev was his noted favourite. Fikret Amirov is famous for the innovation of symphonic mugham, and his beautiful compositions take Hajibeyli’s first efforts at syncretism even further, blending Western and Azebaijani musical styles into something entirely new. Baku is also the Middle East’s jazz capital, and gave birth to Vagif Mustafazade, the jazz piano virtuoso who continued Azerbaijan’s syncretic tradition with the creation of jazz mugham. Despite the Soviet Union’s disapproval of jazz as ‘bourgeois’, Mustafazade rose to prominence as one of the greatest jazz pianists of his era and established a jazz tradition in Baku that remains strong today: indeed the torch has been picked up and carried abroad by Vagif’s daughter Aziza. 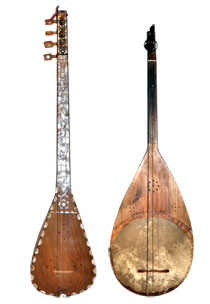 Qopuz
There is still an unfortunate dearth of academic literature on Azerbaijani music and the museum has worked to rectify this by contributing new works. It has recently published a book on the life of Gara Garayev using documents from its collections, many of which are published for the first ti me in the book. Now it is working on a book dedicated to the tar, tentatively titled Azerbaijani Tar and Tar Playing.

The museum plays an important role in promoting Azerbaijani musicians and giving them performance opportunities. In addition to the State Ensemble of Ancient Musical Instruments, it sponsors monthly performances at the Niyazi house museum (a museum which preserves the apartment of Azerbaijan’s great conductor and composer Niyazi Taghizade-Hajibeyov) located on Bulbul Street. On the fi rst Wednesday of every month, young musicians from the Baku Music Conservatoire are invited to perform for a small audience. Hosted by Alla khanim, these gatherings provide a comfortable performance atmosphere for Azerbaijan’s musicians, both established professionals and the nation’s most promising youth, and bring together the music community to share their joy in the art. The performances of two violinists and two pianists from the conservatoire on the evening the author attended one of these gatherings was truly a remarkable display of talent, and demonstrated that the Azerbaijani tradition of musical excellence is still alive and strong today.

About the author: Kelsey Rice is a cello-playing history graduate from New York, USA. She arrived in Baku in June 2010 to study the Azerbaijani language on the US government’s Critical Language Programme. When the two-month course ended she stayed on to learn more about the country.