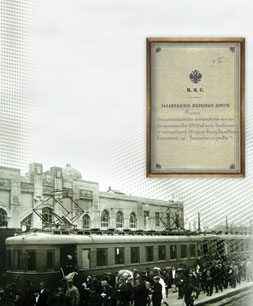 The first railway in the Southern Caucasus, connecting Tiflis with Poti, was opened in 1872 and marked a new stage in the development of economy, industry and trade. However, for Azerbaijan the new age did not begin until 1883, with the inauguration of the Baku section of the Transcaucasian railway, which finally connected the Black Sea coast to that of the Caspian after long years of construction.

In fact Azerbaijan had already opened its first full gauge railway, on 29 April 1880: the Baku - Sabunchi – Surakhany line, with various branches from Baku to the oil wharves in the Black City district was just 25.5 versts [just over 27 km – ed.] in length. At the same time, work on the new section of the Baku - Tbilisi railway, 515 versts (545 km) long, was begun. In spite of the fact that construction of had only just started, on 20 May of the same year the Resolution of the Baku Municipal Duma on the construction of a first class passenger train station in Baku was issued. The new railway site was quickly surrounded with station installations, warehouses and passenger and goods terminals.

The site chosen for the passenger building and associated installations was suitable terrain on the eastern edge of the residential area, at the convergence of roads from Absheron villages and the oil fields.

This was part of the dramatic expansion of Baku, a city approaching a peak in its oil boom.

All plans for track layout and buildings were drawn up in St. Petersburg, capital of the Empire. In 1881 special projects for first and second class stations, including Baku, Yelizavetpol [now Ganja – ed.], Hajigabul, Khachmaz and others which drafted; their overall design was Eastern style, recalling palace constructions of the Muslim East.

Only after stations and arrival and departure buildings had been constructed in Yelizavetpol and Hajigabul was approval given, on 10 November 1882, to the final project of building a first class passenger train station in Baku.

The station building was a two-level design: two-storeyed on the city side and single storeyed on the platform side. On the ground floor were rooms for baggage storage and offices, grouped around a hall; on the first floor – post and telegraph offices, waiting rooms etc.

The Tbilisi station in Baku was designed in 1882 in a project led by architect H.K.Vasilyev who had been responsible for a number of stations on the Trans-Siberian Railway. We cannot be sure that design was his, although his probable participation in the construction of Baku’s railway station cannot be excluded.

At the initial stage the project in Mauretanian style was executed by Professor Bruni, artist Peter Drittenpreis and others, the fruit of collective work by architects and artists. 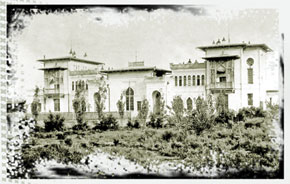 Baku’s railway station essentially differed from other similar buildings on the Transcaucasian railway not only in the architectural design of its facades and interiors, but also in its character and scale of construction. The grand appearance included the unusual feature of a two-tiered hall with staircases leading to a gallery with tiled floor and stucco mouldings on the walls and eaves. The richly-ornamented walls with references to Eastern carpet designs were topped by eaves taking the eye to the relatively restrained ceiling decor.

The station interiors, especially the hall, with the main open staircases leading to the arched gallery presented a no less impressive picture. The first class waiting rooms and the imperial rooms, located in the right wing of the building and reached by the main open staircase with a magnificent pavilion of graceful design, were notable for the high quality of decoration and delicate proportions. The exquisite architecture of the imperial rooms, especially of the lounge executed with great artistry, was testament to the faultless taste of the project’s creators. For all their stylisation, they displayed the craftsmanship and art used in Eastern architecture.

The grandeur of composition and imposing prospects presented to different fronts made Baku’s station a notable contribution to the city’s architecture.

It was also significant that the potential influence of the industrial and factory area (the Black City) on the economy of Baku was growing nearby. The placing of the railway junction in the geometrical centre of a large city, with the western borders being residential and, in the east – the Black City, accelerated the integration of diverse zones into a uniform urban system which greatly influenced the establishment of new quarters and the defining of street lay-out around the train station. On 28 November 1883 a new street was laid; named Station Street (nowadays Pushkin Street), it gave access to the fabulous railway station.

Three parallel streets running north-south - Krasnovodskaya (nowadays Samed Vurgun Street), Bolshaya Morskaya (nowadays Bulbul Avenue) and Kaspiyskaya (nowadays Rashid Behbutov Avenue) which had been laid down in the early 1870s, began to be lined with buildings following the construction of the Transcaucasian railway.

Numerous random buildings, illegally built, were drawn to the railway station area. New streets, which afterwards became the city’s thoroughfares, appeared spontaneously to connect with the train station, the industrial zone and with the Absheron peninsula.

The station in Baku was actually constructed in 1883 alongside the laying of the Baku – Tbilisi railway. The Baku News of the day wrote this about the opening of the Tbilisi railway station in Baku: “…Tuesday 10 January 1884 was marked by a long-awaited event – the illumination and the opening ceremony of the new station took place… The architect N.L.Glebov supervised the artistic detail. The architect L.Z.Rossi carried out the construction work… 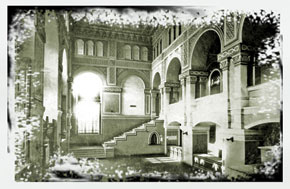 The vestibule, Baku railway station, 1899
People examined every detail of the fabulous building with great interest. The most favourable impression was made by the entrance and the hall with staircases and gallery, with the tile floor and stucco mouldings on the walls of first class in the same style, finished charmingly… But the exterior of the facade from the entrance is especially good … Around the hall on the ground floor are placed cash desks, the baggage compartment and office accommodation … The decoration of the ‘Imperial rooms’ in the right wing of the building amazed all with their magnificent and delicate taste”.

... and an imperial touch

Five years passed before the imperial family visited those rooms.

…on Saturday 8 October, 2 o´clock in the afternoon, 1888, the imperial train arrived in Baku and the Emperor Alexander III, with his family, stepped onto the platform. The flag was immediately raised over the Baku governor’s house, a salute was fired from the batteries and courts. The railway station was decorated colourfully with flags and plants. The ‘Imperial rooms’ were also beautifully adorned with Eastern carpets and groups of tropical plants.

The tsar was met on the platform by the eminent people of Baku and ladies of local society, including Muslim women, were presented in the ‘Imperial rooms’. People massed in motley costumes stood on the streets. The whole city was decorated with flags, even phaetons and carts drove about festooned in flags.

The emperor went from the train station to the laying of the foundation stone of the Alexander Nevsky Cathedral which was due to be constructed with donations from the population of Baku. The Muslim population contributed more than 80 per cent of the total sum collected for building the church.

The departure took place on 9 October, at ten o´clock in the evening. The imperial train progressed from Baku towards Kutaisi and the next day, on 10 October, it stopped at Yelizavetpolsky station, where magnificent meetings also took place. There was an exhibition of work by the skilled craftsmen of the Yelizavetpolsky province in the ‘Imperial rooms’ within the station. The poetess Khurshid Banu Natavan, well-known daughter of the Karabakh khan and wearing a magnificent national costume with a gold turban decorated with a large bejewelled agraffe, was introduced to the Emperor at the exhibition. Natavan presented a splendid carpet to Alexander III, a cloak to the Empress and a woollen horse blanket to the heir Nicholas.

Time passed and the year 1914 approached. On 1 August, World War I erupted, involving the whole of Europe. Borders fell, the structure and the inner order of the powers at war were changed. The need to continue building railways in Russia intensified, especially in the southern parts of the Empire bordering on Turkey and Persia.

In view of developments in the military-political conditions where battles were being fought with Turkey, and the fact that northern Persia (Iran) was under particular Russian influence, the tsar attached special strategic importance to realising these tricky and expensive engineering projects.

…On 26 November1914 the Emperor Nicholas II arrived on a special train of inspection to Tbilisi from Yekaterinodar through Derbend, entering Bilajari station at 9.20 in the evening. A meeting with military men, state officials and religious representatives from Baku took place at the railway station. Tsar Nicholas stated at the meeting:
“Pass on my thanks for the feelings of love and fidelity expressed by the people of Baku. I regret that circumstances do not allow me now to go into Baku. With God’s will, I will visit you in the future….”

Baku’s leadership gave 2500 gold roubles to the Emperor for the needs of the wounded the sick and many other causes. The special train departed from Bilajari station at 9. 45 pm….

Three years later, revolution and the Bolshevik coup took over.