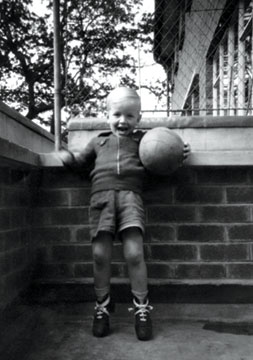 They all assembled one fine spring evening for his jubilee in Baku’s Jazz Centre. As we were informed by the slide show/video made for this special birthday, he was born in Wolverhampton, in the centre of Great Britain on 19 May 1951, as the Cold War simmered around the Earth. However, we would not be wrong in saying that he can find common ground with anyone, he observes and learns and is, in short, a man of unrelenting energy. He is truly English in character: cool-blooded, patient, polite and noticeably soft - spoken and laconic in explaining his thoughts. We are writing here of the 60th birthday of Visions of Azerbaijan’s editor Ian Peart, which we celebrated recently.

It was interesting that the party was organised in secrecy, without the celebrant’s knowledge. It was certainly a surprise for Ian. He was expecti ng to celebrate with his family - then, just half an hour before the event, he was diverted to Baku Jazz Centre. He was in shock as friends began to arrive at the same venue. The guest of honour wondered to himself why so many people were assembling there. There was only one reason: that day was his 60th birthday. We should note that his wife, Saadat khanim Ibrahimova, had herself arranged everything, invited the guests and sworn them to secrecy.

The evening was superbly organised and was att ended by Ian’s family, friends, colleagues: prominent members of the intelligentsia and the arts world. The well- respected radio and television programme host, Rahib Azeri, opened the evening’s proceedings by inviting Saadat khanim to speak. She welcomed everyone and thanked them for joining the family’s celebration. Throughout the evening guests took the opportunity to express their good wishes and to speak of Ian’s life and work. A common theme was that wherever he worked he always sought innovation, development and progress and earned people’s endless affection. Those who know him say there is always a smile on his face.

Ian Peart’s teaching and translation work in Azerbaijan and his contribution to the development of the evolving English language press in the country is much appreciated. Those who spoke highlighted the respect accorded to his creativity by the intelligentsia. His devotion to knowledge and rationality, along with his innovatory approach, is a fine representation of British culture in Azerbaijan.

The gift of performance

Many friends of our guest of honour congratulated him with the gift of their own performances. The Eagles of Azerbaijan boys’ dance group, led by well-known dancer, Honoured Artist Khanlar Bashirov, performed the dances Zorkhana, Yalli and Sheki. The actors of the State Pantomime (Mime) Theatre, led by Honoured Art Worker, Bakhtiyar Khanizade, performed their sketches, Mannequins and Violin Players. 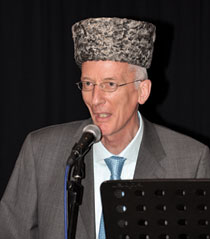 Also among the tributes was one from 14-year-old student of Baku’s Music School #16, Heydar Mammadov, who played a highly entertaining cameo of jazz and boogie-woogie piano.

This was followed by the humorous slide-show/video of pictures and episodes from Ian’s life. The screening, accompanied by an effective musical soundtrack and with a cleverly compiled comedic storyline, was made by professional film directors Elchin Musaoglu (40th Door) and Khagani Hashimov as a birthday gift . It was scripted by Elchin Alizade, also a director, and narrated by actors Rovshan Agayev and Honoured Actress Mesmeh Agaverdiyeva.

Schooled in the town of Wolverhampton, Ian studied at Kent University, qualified as a teacher and graduated from Leeds Polytechnic in literature and history. In his free ti me he was an amateur actor at West Yorkshire Playhouse, appearing in a number of professional performances over nine years. Before coming to Azerbaijan he had lived and worked in Greece and Saudi Arabia as an English teacher. He arrived in Baku in April 2000, taught English for three years with English Language Solutions and then took over for a six year stint as country manager. Before being appointed editor of Visions of Azerbaijan he also taught English language and literature at Khazar University. Over these years he also contributed articles to Visions and the local press on a variety of cultural and social subjects.

Ian has a very interesting personality and his own brand of charisma; he is always occupied in a number of different spheres: literature, art, linguistics, translation and journalism. He is one of those rare expats who takes an active part in the cultural life of Azerbaijan. Exhibitions, classical music concerts, theatre, the cinema, jazz and mugham festivals which are held in the capital are rarely missed, and he is oft en to be found at the Tofiq Bahramov stadium enjoying the skills of local footballers. He is not simply a passive observer of these events, with his wife Saadat khanim he has translated catalogues for exhibitions and festival programmes, written commentaries for music projects and programmes for museum websites, 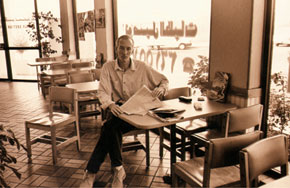 Time out from teaching in Jubail, Saudi Arabia
as well as translating plays and stories; as a journalist he writes and publishes all he sees. As he says himself, he has been interested in literature, music and the various art forms since his youth. This love for literature guided him towards the press. His devoti on to classical English literature means that every year on 23 April, all his colleagues are invited to celebrate the great William Shakespeare’s birthday with a cake. Of course his interest extends to cover classical Azerbaijani literature. He and Saadat khanim are planning to translate and write about a certain period of the literature to introduce it to western readers.

A thoughtful character, Ian is keen to adopt a professional attitude towards all he does. When researching something, he likes to go into the subject deeply, checks it over again and wants to see for himself, at first hand if possible. He is responsible and true in his work, surprisingly so on occasions. While being exacti ng in his search for accuracy, he is calm in approach. It is a pleasure to work with him - a true professional. I cannot remember him being late for work, or failing to fulfill a task. By the way, he walks approximately eight kilometres to work. This stems from his wish for a healthy lifestyle. His principle for life seems to be - early to work and in a hurry to be home.

A further characteristic is Ian’s faithfulness as a friend. His outstanding qualities are sincerity and fidelity. He has earned the friendship of hundreds of people in his eleven years in Azerbaijan. It happens that he goes to interview people as part of his work, and the sympathy generated develops into friendship. We don’t have to look far for evidence; the well-known artists who performed at the party for his jubilee all have ties of friendship with him. After he had recovered from the shock of such a turn-out on that evening, he said himself that there was no better birthday present than to be surrounded by the warmth of family, friends and the wonderful creativity that springs up everywhere in Azerbaijan

An English gentleman who found his happiness in Baku It is a real happiness to work in the same organisation with this lovely man and talented editor. As we mention happiness, we have to end on the note that Ian has found his true happiness in Baku. He has built his family life in Baku with Saadat Ibrahimova. Their marriage was solemnised in Baku’s Saadat Saray. We should explain here that Saadat Saray translates into English as Happiness Palace. To the question, What is real happiness? Ian replies that for him it was joining his fate to that of Saadat khanim. He explains to friends that he found real family happiness in his maturity in Baku. Saadat khanim, who teaches English at the State Culture and Art University, as well as being his wife, is also Ian’s comrade-in-arms; they are like-minded and many of the articles published in the press are the fruits of their joint labour.

Ian’s life and work are at a peak. At peace with his fruitful and creative life in Baku, he is still finding new projects to work on. As he takes on the sometimes difficult and painstaking research, which nevertheless leads to those richly productive moments, we wish him health in body, new success and inexhaustible adventure in Azerbaijan.