What’s in a name? Everything! Azerbaijan’s magical carpets deserve recognition 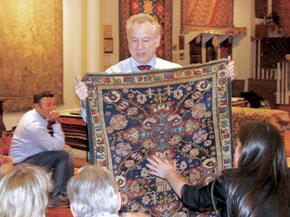 The legend of the flying carpet was real...

My first introduction to Azerbaijan was in a book I read in 1971 when I was 19 years old and searching for larger meaning in life. I had grown up in the sleepy suburbs of Philadelphia and had become convinced while still a teenager that I needed to travel, see the world and learn a lot about how the rest of the world lives and thinks.

The book I read, Meetings with Remarkable Men, was written by an early 20th century mystic philosopher and world traveller, George Gurdjieff. He was born and raised in the Caucasus and, on the first pages of his first chapter, he mentioned a country I had never heard of, but was about to hear a lot about: Azerbaijan. I remember as if it were yesterday feeling that the name, so odd to my ears, just jumped off the page. In other writings this same author mentioned his abiding interest and expertise in the oriental carpets of the regions, from the Caucasus, Turkey, Persian and Central Asia, where he claimed to have spent years in search of specialized esoteric wisdom.

My first encounter with the carpets from Azerbaijan was filled with astonishment. I had not experienced such a wealth of feeling from a physical object. I didn’t know it was possible to feel transported, merely by gazing at a woven pattern of design and colour. Mr. Gurdjieff claimed that there existed in the world art that was of another level than the one we are accustomed to, art that was able to transport us to another way of feeling in this world, and the old carpets from the orient were sometimes able to do that. I felt like I was witnessing the source of the ancient legend of the flying carpet. Immersing oneself in the geometric shapes, elusive in meaning yet filled to the brim with energy, it seemed indeed that the legend of the flying carpet was real.

After some years passed, my curiosity grew about the naming of these magnificent works of folk art. I also felt a definite preference, an affinity for the carpets from the Caucasus known as Kuba [from the Quba region – ed.] and Shirvan.

When looking at a map of the carpet weaving regions, I saw that Kuba and Shirvan were located in that country called Azerbaijan. I remembered the name Azerbaijan from the book I had read, and wondered why the carpet dealers and an- tique auction houses, as well as the scholarly books and museum displays that followed the dealers’ nomenclature, referred to these particular oriental carpets as Caucasian, when in fact it was clear they came from Azerbaijan.

Provenance – the single most important feature

The Caucasus, a large region sandwiched between Russia, Iran and Turkey, includes numerous countries and ethnic groupings: Lezghi, Avar, Kumukh, Tat, Lak, Abkhaz, Osset, Chechen, Georgian, Armenian, Azerbaijani and so on. When the Persian Empire ruled the Caucasus, they referred to the peoples who spoke Turkic languages, such as the Azerbaijanis, as Turks, and when the Russian Empire took over the Caucasus, they referred to all non-Slavic peoples everywhere in the Russian Empire as Tatars. 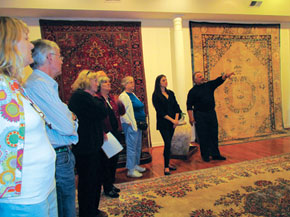 David Zahirpour welcomes guests to his carpet showroom
Azerbaijanis are not Tatars and, although they do speak Azerbaijani, a Turkic dialect, they are not identical to the Turks of Anatolia or the Turks of Central Asia, so it would be normal to call them by the name of the land they have lived on for so many centuries, Azerbaijan.

The carpets woven by Azerbaijanis in both Northern and Southern Azerbaijan are geometric, in contrast to the flowery designs of typical urban Persian carpets. What is unique about the carpets woven by Azerbaijanis is the high level of energy that the designs and colours trigger in the attentive observer. Not all Azerbaijani carpets are equally powerful in this regard. Many are merely beautiful, charming and pleasing as weavings, but many have a real charge to them, as if the carpets are in possession of some mystical energy that electrifies the human imagination.

Indeed, who were the weavers of these intriguing and enchanting carpets? It turns out that most were young Azerbaijani girls preparing their dowries, with their mothers and grandmothers assisting them and teaching them the ways. The vast majority of weavers were illiterate villagers. This defies all one’s suppositions about people and art. The antique carpets from Azerbaijan were often so sophisticated that they rivalled the works of western abstract artists, yet the creators were unschooled by our modern, educated standards. How is this possible?

Personally, I think it is the music. Azerbaijani weavers, like all weavers, sing while they create, and Azerbaijani music, like other music of the region, is mesmerizing. In Azerbaijan, the musicians and singers have evolved a form of eastern music that is unsurpassed in its primordial power to transport the listener to other realms. Undoubtedly, this must have shaped the weavers’ taste in design. They attempted to achieve the best in flying carpets and, when they succeeded, they created a class of folk art unmatched in the world of textiles. 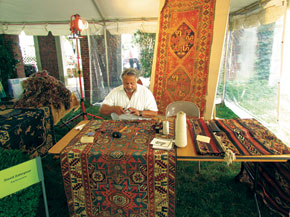 David Zahirpour repairs the wear at the Textile Museum

It is true that many carpets woven in the Caucasus were woven by members of ethnic groups other than the Azerbaijanis. It is also true that the vast majority of the carpets originating from the Caucasus were woven by Azerbaijanis, and where the origins are unambiguous, this should be recorded in the naming of the carpet. There is one major antique auc- tion house -
http://www.rippon-boswell-wiesbaden.de/content/auc- tion_popup.php?lot=22234

that has been naming some of the carpets of Azerbaijan as Azerbaijani, but not all. Many of them remain with the imprecise term Caucasian, even when unambiguously of Azerbaijani origin.

I can think of no legitimate reason why anyone would object to a correction of the historical record on the taxonomy of this important category of oriental carpets. Azerbaijan, the source of so many of the world’s best examples of magic flying carpets, deserves the credit for this accomplishment, and the world should know the truth about where these revered carpets come from, and who wove them.

On 7 May 2011, I drove from my home in Cherry Hill, NJ to Washington DC, to give a talk on carpets in the carpet showroom of David Zahirpour. David, a third-generation dealer in an- tique oriental carpets and textiles and originally from Iran, emigrated first to Israel before eventually settling in the DC area. The event was organized by the DC-based Karabakh Foundation, and the opening remarks were made by Diana C. Altman, the Foundation’s Executive Director, and Adil Baguirov, member of its Board of Directors and co-founder. The topic was Azerbaijani carpets and the names they go by other than Azerbaijani. Our host for the evening, David Zahirpour, gave the attendees a quick tour of his oriental carpet gallery.

The first speaker was Dr. Rovshan Ibrahimov, visiting professor of international relations from Qafqaz University in Baku, Azerbaijan. He displayed a slide show of the techniques and methods of traditional carpet weaving from Azerbaijan. About 30 carpet lovers attended our programme. Both of us spoke to the idea of adding the name Azerbaijan to the vocabulary used in describing Oriental carpets. The programme represented a first step towards achieving better recognition of Azerbaijan carpets which, for various twists of history, are not generally attributed to Azerbaijan. To the best of our knowledge, this was the first public discussion about correcting the historical record by affixing the name of Azerbaijan to all carpets made by Azerbaijani people living in both the Republic of Azerbaijan and in the Islamic Republic of Iran. I also used a slide show, of 19th century carpets from a private collection, and a map that is published in every Sotheby’s auction catalogue featuring antique oriental carpets. Their map of the classic, oriental carpet weaving areas clearly indicates Azerbaijan as the area where most of the so-called Caucasian and many of the so-called Persian carpets originated.

On 4 June, the action was once again in Washington DC and also organized by the Karabakh Foundation. This time the host was the presti- gious Textile Museum and there were indoor and outdoor exhibits; the weather was perfect. There was a large stage under canvas and people were sitting on chairs or lounging on the grass, listening to a dazzling performance by the great Azerbaijani kamancha player Imamyar Hasanov, who mesmerized his audience with a brilliant solo performance, a mixture of mugham and tesnif - metrefree modal improvisations and metrical traditional jan’s historic and continuing role as one of the world’s major carpet production centres. This was the second public demonstration and talk on the subject of what to call these world class textiles. According to Richard Rothstein, who has a showroom and warehouse of antiques and a large collection of some of the finest oriental carpets in Mt. 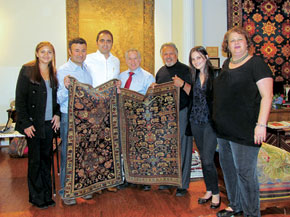 From left to right: Michelle Estrada (KF), Rovshan Ibrahimov, Adil Baguirov (KF), Jeffrey Werbock, David Zahirpour, Kelsey King and Diana Altman (KF)
Laurel NJ, the vast majority of the socalled Caucasian carpets and perhaps up to half of the so-called Persian carpets are in reality Azerbaijani carpets. He derives his statistics from a book on Azerbaijani carpets by famed Azerbaijani carpet expert Latif Kerimov, and from personal experience handling and viewing thousands of oriental carpets. (See my interview with Richard in Visions of Azerbaijan March-April 2011). Our plans for the future are to organize more lecture demonstrations about Azerbaijani carpets at every suitable venue, to enlighten everyone who loves oriental carpets that Azerbaijan is the country songs of Azerbaijan. After his solo, a costumed troupe of international dancers presented tradi- tional dances of the Caucasus. Finally, Diana Altman took the stage and delivered a brief speech about the Karabakh Foundation and its goals of promoting Azerbaijani culture in the USA.

Diana later expanded on the Foundation’s aims for its Azerbaijani Rug Initiative (ARI), which is a five-art programme to assemble a community of carpet experts and aficionados; promote the appreciation of Azerbaijani carpets within the general public; work to achieve accurate nomenclature in the public record; launch an initiative to ensure that purveyors and providers of carpets give proper provenance and to promote Azerbai jan’s historic and continuing role as one of the world’s major carpet production centres.

This was the second public demonstration and talk on the subject of what to call these world class textiles. According to Richard Rothstein, who has a showroom and warehouse of antiques and a large collection of some of the finest oriental carpets in Mt. Laurel NJ, the vast majority of the socalled Caucasian carpets and perhaps up to half of the so-called Persian carpets are in reality Azerbaijani carpets. He derives his statistics from a book on Azerbaijani carpets by famed Azerbaijani carpet expert Latif Kerimov, and from personal experience handling and viewing thousands of oriental carpets. (See my interview with Richard in Visions of Azerbaijan March-April 2011).

Our plans for the future are to organize more lecture demonstrations about Azerbaijani carpets at every suitable venue, to enlighten everyone who loves oriental carpets that Azerbaijan is the country of origin for so many of the finest examples, and to persuade the dealers, the auction houses, the scholars who write books on oriental carpets and the world’s museums to correctly identify and label those carpets woven by the people of the lands called Azerbaijan in both the Caucasus and Iran.

For more information see Richard Rothstein’s webpage on the correct attribution of provenance for oriental carpets:
www.richardrothstein.com/caucasian-rugspersian- rugs.html
and on the Karabakh Foundation:
www.KarabakhFoundation.org