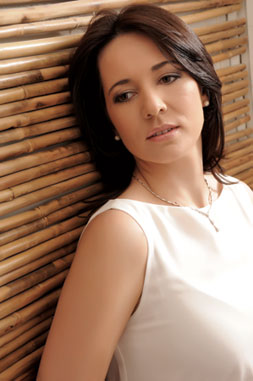 April 2011 was a landmark in the career of violinist Sabina Rakcheyeva – it may also prove to be one for your musical development. The group she formed in 2009 released its first album, UnVeiled, thus bringing to a much larger audience the music of the multinational Sabina Rakcheyeva Ensemble.

Tipped off by the London office of The European Azerbaijan Society (TEAS), I went to Sabina’s website and clicked on Listen to the excerpt from UnVeiled. There’s just a minute and a half of Interlude I from the album, but it was enough to suggest that I needed to hear more. As luck would have it, I was soon on another assignment in London – where she is based these days, as PhD researcher (London University’s School of Oriental and African Studies), member of the European Cultural Parliament and TEAS Arts and Cultural Advisor. Too good an opportunity to miss. Two things were clear as soon as we met: the album was the culmination of a very long process and it was something that Sabina was very passionate about. By the end of the interview I was dying to hear the music but, out of respect for the creator’s wish, held off until there was time to give it full attention. Three whole, busy weeks passed and then a trapped nerve enforced immobility. I listened, and…. first, let’s tell a little more of.

The biography on her website details the huge range of her musical interests and experience and I wanted to hear more about the development of someone who was maturing just as her country regained its independence and struggled to emerge from the wreckage of the Soviet Union.

She was evidently a quite determined child – watching a violinist perform on television, she decided this was for her and the 6 year-old Sabina’s parents were soon persuaded to enrol her for lessons. At 13 they supported her wish to pursue a musical educati on at the State Music College.

My parents and teachers taught me to work hard and I had the will to learn. Maybe this was a form of escape. They were diffi cult ti mes, nobody knew what would happen and Azerbaijan was culturally broken. But I wanted to perform, to be on stage.

Moving on to study for a Master’s Degree at the Baku Music Academy (Conservatoire), she was meanwhile playing and impressing at embassy events. Her talent att racted support from both local and expat sources and the chance to develop further:

I always wanted to explore and was off ered the opportunity to study at the Juilliard School in New York.

The fi rst Azerbaijani musician to att end and graduate from the renowned American music school, Sabina completed her Master’s Degree in 2002 and began musical relati onships which were to prove enduring and fruitf ul; among them Kinan Azmeh and Kathleen Tagg, who both play on UnVeiled.

The urge to explore was sti ll strong and given full rein during seven years as a member of the UBS Verbier Orchestra, which took her on tours over much of the world. The range of music and musicians covered is as impressive as the geography: Sabina has played with or for many of the major names in classical, jazz and folk – again, see her website. 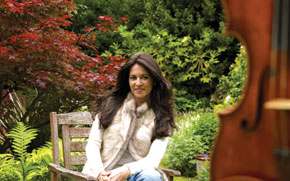 Everything in the garden….

Travelling so extensively and living in diff erent societi es must have an eff ect on one’s sense of identi ty and view of the world and Rakcheyeva sees music as an opportunity to both express herself and to engage with other cultures. For musicians, she says,

…. the ultimate happiness is self expression, if you can do it without compromise. Part of the deal is that there are some things I have to do, and I accept that. I am an artist, but I can relate to others; that keeps me balanced.

The need and ability to relate to others works on many diff erent levels – an interview with her is a compelling experience; her drive and warm enthusiasm draw you into her project, I suspect, whatever your preconcepti ons. The evidence is also very apparent in the line-up and sound of the Sabina Rakcheyeva Ensemble. Then there’s her work with the European Cultural Parliament and TEAS. Her ideas on culture’s broad politi cal role are ambiti ous, as revealed in her PhD work:

My research also explores cultural diplomacy through music in our current era of globalizati on, looking at how musical collaborati on as a tool of public engagement can narrow diff erences, and resolve and prevent confl icts….. My aim is to develop our understanding of performance within cultural diplomacy, as ‘soft power’ and as intercultural dialogue, taking my cue from Mahatma Gandhi, who said: ‘No culture can live, if it att empts to be exclusive.’

But expressing herself through music is clearly Sabina’s fi rst love and her early desire ‘to be on stage’ has propelled her development as an arti st. Her studies in Baku and New York and her work with the Verbier and other orchestras were, of course, important to her, but,

Having developed musically with a ‘classical’ identi ty, a few years ago I found a diff erent dimension…. I wanted to refl ect this other part of my identi ty. As I began to improvise, I felt free; it’s so exciti ng to go on stage and not know what will happen or where the power of music and imaginati on will take you….

This reference to improvisati on in public is probably where the story of Un- Veiled really kicks off , although the album’s genesis is rather more lengthy evolu- ti on than instant creati on:

When I was at Juilliard, they would ask me to play Azerbaijani music; I usually played [Gara] Garayev and other classical composers but, once, they asked me to play some traditional music and I played ‘Lachin’. I was amazed by the response. It became a kind of signature tune for me…. I never imagined I’d have such positive thoughts from it.

One night I was improvising while looking out over Manhattan and I incorporated ‘Lachin’.

This improvisation on a song about a town currently under Armenian occupation has developed into Reflections, a track on the album. The first time I saw Sabina play was three years ago, in performance at an event in a carpet factory in Baku – she was leading a trio then, while local artist Mir Teymur improvised a painting in response to the music. Another precursor to the make-up of her first album. 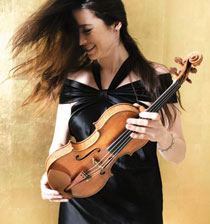 Although some of the musical ideas had been around since Juilliard, the full Ensemble played for nearly two years before the time was right to go into a studio. The excitement of self-expression and spontaneous creation with others was not abandoned. Despite all the practical problems: a delay while the piano was tuned, getting all the musicians in one place at the same time,

More than 50 per cent of the music was improvised in the studio. It was fun to play.

And UnVeiled was recorded in two days.

A question about the title raises a laugh; there are obviously many possible reasons and interpretations, but the creator finally contents herself with a smile and

It reveals something veiled before

So, let’s get down to

You may get some idea of the music from the Ensemble’s composition:

Although there are seven tracks on UnVeiled, it is meant to be heard as one composition and I can confirm that it certainly works that way: there is a reflective quality throughout, as if memories appear and are turned and contemplated before evoking a new thought. This is not to say that it is solemn. Sabina describes the first track, Towards the East, as a “flurry of wild imagination” and indeed there is a medley of styles. Following a deliberate violin introduction, with the oud adding to its depth, the music bursts into a rhythmic jig and a bright dancing clarinet . All the players contribute magnificent musicianship to produce from their differences a strong and unified tribute to musical imagination.

The first of two short interludes follows. Sabina said that she had wanted some soundscapes for the album, but in breaks in the recording process she and Kinan Azmeh improvised together. Luckily the engineer had left the microphone on; when the results were played back they liked what they heard. The first one is the sample that can be heard on the website.

Clock is track three and credited to Att ab Haddad (the others, except for track six, are by Sabina). A light, searching theme, again with some intriguing references to diff erent traditi ons. Perhaps it’s my overheated imaginati on, or perhaps it comes down to the universality of musical language, but did I hear Greek, Cuban? There are echoes and traces throughout the album of music from other lands, beauti fully fused into an expression of the human experience.

Refl ecti ons, next up, is just wonderful. The wistf ul longing of the Lachin theme ghosts into the improvisa- ti on and is countered by a swirling dance solo on the violin – the melancholy and the joy of the associati ons conjured up are an intoxicati ng experience.

Aft er the second improvised interlude, Sari Gelin, probably Azerbaijan’s favourite traditi onal song, plays the senses to the full and again the beauty of the music emerges from six excellent musicians pouring their experience into the same plot; the emoti onal strength in a taut violin, the full, rounded sound of the clarinet and the feeling put into every stroke across the strings of the oud, compel response. There is something special about this theme, as Sabina says: 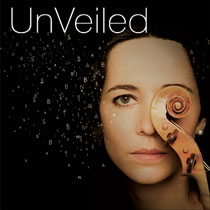 It mesmerises all the musicians I work with and instantly draws them in to its world. We recorded this version in one take.

Once in Baku completes the cycle with an evocati on of Rakcheyeva’s origins – a city of traditi onal, classical and jazz music. The drive provided by piano and clarinet seem to re- fl ect the dramati c push forward which has transformed the city of her birth almost beyond recognition.

As if the magic of the music were not enough, the eye is also given a treat. Azerbaijani arti st Kabira Alieva was given a copy of the music and invited to produce visual responses as she listened. The result is a sti mulati ng collecti on of inked improvisati ons in the booklet accompanying the CD.

Listening to UnVeiled is a revelati on. It will communicate to whoever opens their ears and takes the time to listen – whether coming from classical, folk, jazz, east or west backgrounds - and the almost limitless prospects for musicians with this level of skill and empathy are truly exciti ng. I can’t wait ti ll they play the Philharmonia in Baku (they must, surely?)

UnVeiled will also be presented at an exhibiti on of Kabira Alieva’s art:
MALL GALLERIES
The Mall (near Trafalgar Square)
London, SW1
5-10 September 2011, 10-5pm