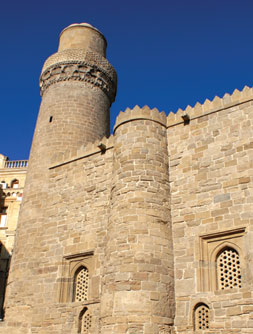 Mosques provide the most significant and widespread examples of Oriental architecture as applied to religious constructions. As well as prayers, mosques in Muslim countries are also used for other activities bringing people together. Numerous village mosques were built on Azerbaijani lands between the 11th and 13th centuries and their architectural significance has been preserved to the present. The Muhammad Siniqqala mosque in Baku is one of the most significant examples of Islamic architecture in terms of its structure.

The mosque was built by local dignitary Muhammad Abubakr oglu from 1078-79. As the city mayor, he was both the originator of the project and sponsor of its construction. Thus the mosque was named Muhammad after him. One of the mosque’s minarets was damaged during a marine expedition by Russian Tsar Peter the Great to the Old City, which is why the mosque was also called Siniqqala (translates as Broken Tower).

The variously-decorated one-room house of prayer is connected to a small vestibule on the north side of the mosque. There is a pair of grilled windows to light the central axis of the mosque’s walls. The hall has a wood-finished ceiling and is embellished with narrow ornamental windows in its east and west walls. The ornamentation around the arch is constructed from burnt brick, which is not very typical of Baku and Absheron architecture.

Until the early 20th century, Siniqqala was a single-level mosque and had a relatively small capacity. When the two buildings either side of it were cleared, a lower level emerged. The initial appearance of the minaret and mosque proper was restored. Making full use of the large area available for the mosque, the architect had created a unique two-level structure with a high minaret. The ground floor presented a rectangular room with a door opening to the northern façade and two small windows. Archaeological items recovered from a well there indicate construction in the late antique or early medieval period.

In terms of its planning and engineering solutions, the upper level (40 square metres) represents a repetition of the ground floor. There are two windows, on either side of the sanctuary arch in the middle of the northern wall. Thus the Muhammad mosque’s prayer area is very well lit.

The building adheres to one of the main principles of Shirvan and Absheron architecture: harmony between the inside and outside of the structure. Despite the relatively small dimensions, the architect did not finish the building as a single, whole unit. On the contrary, cashing in on the building’s functionality, he attempted to create a dynamic space. The compositional expression of the Muhammad mosque creates the impression of plasticity and harmony with the exterior. The logical but sporadic sequencing of architectural detail, as well as the fact that masonry work was completed with semi-dressed stone, creates an interesting effect of light and shade in the interior.

The mosque’s southern façade represents a protruding, semi-cylindrical area with a sanctuary and a millennium stone wall. Its windows also protruded. The dynamics of the mosque’s composition are completed by the towering minaret that overshadows surrounding buildings.

The compositional focus of the Muhammad mosque, the minaret, is not in physical harmony with the house of prayer. Researchers believe that the smaller size of the praying area was the result of the mosque being constructed after the minaret. 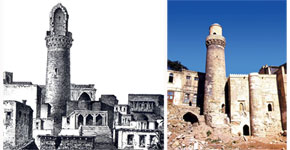 The cylindrical minaret rising above the mosque is crowned by a muezzin balcony placed on a stalactite cornice. The spiral stone stairs inside the minaret start begin at the level of the praying area floor. The minaret’s basement is low and rectangular in shape. There is a door in the middle of the minaret opening onto the mosque’s roof. A verse from the Qur’an is engraved in Kufic scri pt on the upper part of the minaret.

The minaret is cylindrical in shape, narrowing at the top. Experts believe that, due to its strategic location, it was also used as an observation point. The large stalactites surrounding the upper part of the minaret, in addition to being ornamental, are also there to support the balcony. The stones beneath the balcony bear wonderful geometrical patterns.

Since minarets were important civic symbols in the early years of Islam, they were usually formidable and magnificent. Their proportions made it impossible to fit them into a building’s structure. If we examine mosques similar to the Muhammad, we can see the same features in the 9th century Malviyya minaret of the Samira mosque and 10th-12th century minarets in Central Asia. Azerbaijani minarets known to belong to the Seljuk period (the Sava Jame mosque, the Shamkir Juma mosque, the Ardebil Juma mosque) are also detached from the mosque buildings. The subsequent evolution of mosques had a reverse effect on the size and overall dimensions of their minarets. They became much more elegant and fitted well into the overall composition.

As was the case with all other medieval Baku mosques, the relatively small size of Muhammad Siniqqala is explained by the small size of the city proper. Standing more as an architectural masterpiece, the mosque was a symbol of the magnificent 11th century city of Baku.

Archaeological excavations around the mosque

Archaeological excavations in the area around the mosque have established three layers of occupation on the territory. The first layer covers a period from ancient times to the 9th century, the second is attributed to the period between the 9th and 13th centuries, while the third covers the 13th-17th centuries. Most of the archaeological findings were discovered in the former seaside area along A. Zeynalli Street, in the vicinity of Maiden Tower and the Muhammad mosque.

Following a 1988 excavation, archaeologist F. Ibrahimov established that the mosque used to cover a surprisingly large area. The present minaret is said to have been a formidable and impressive structure standing on a square foundation. Immediately beneath the praying area there was a domed room of the same size. Engravings discovered on the walls of that room are evidence of people’s pre-Islamic beliefs. The material and cultural items discovered during the excavation suggest that the room was built in ancient times. It is also believed that the mosque stands on the site of a pre-Islamic Zoroastrian temple. The columns discovered in the room are evidence of how ancient is Baku’s history.

Looking at pictures of the Old City taken in 1980, we can see the results of the decision to protect the Muhammad mosque, clean the surrounding area of domestic waste and conduct extensive archaeological excavations in the area. 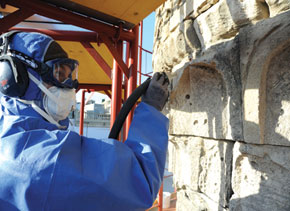 Conservation process in the mosque

The objects recovered from excavations in the last 30 years, as well as an analysis of the Old City’s seaside area, have led to the conclusion that the areas surrounding the Muhammad mosque, Maiden Tower, Z. Zeynalli Street and Baku bay are the oldest population centres in Baku.

An excavation conducted in the southern section of the Muhammad mosque in 1991 revealed a large room with columns that was built on a massive rock. Several column caps were also discovered. There is no doubt that the room dates back to ancient times.

Numerous coins were also found. An ancient copper coin was discovered from the above-rock layer of occupation in 1994. Specialists believe that the coin belongs to the Ahamani (Achaemenid) period. It is said to have been coined on behalf of Shah Khashayar (Xerxes, son of Darius I). The coin weighs 2.9 grams and is 21-22 mm in diameter. It was discovered by Professor M. Seyfaddini and Professor I. Babayev.

Several coloured pots were also discovered in the area. In fact, few coloured pots have been found in the Old City. They largely date back to the Bronze and Iron Age cultures in Azerbaijan. These pots were of high quality, made of fine clay and coloured red. They were symmetrical and had a polished surface. Similar pots have also been discovered on ancient sites Shamakha. Their discovery in the Old City is further evidence of Baku’s antiquity.

The excavation around the Muhammad mosque conducted in 1986 discovered a large, earthenware pitcher attributed to the Early Middle Ages. At first sight, pitchers of this size and shape resemble those of ancient times. Made from a mixture of clay and sand, the pitcher is a greyish colour. This was the first discovery of an earthenware pot in the Old City. It is 1.1 m high; the neck is 15 cm, the body 70 cm and the bottom 5 cm in diameter.

The mosque is located in a busy part of the Old City. The numerous archaeological excavations conducted in and around the site over the years have revealed a number of other material and cultural items: wells, ovens and hearths. Most of the findings are attributed to periods from the 9th-17th centuries. They include pitchers, jugs, earthenware pots, lamps, water cans, polychrome and monochrome plates and bowls etc.

The Muhammad mosque has therefore had an indispensable role in studies of the ancient history of Baku.

A workshop marking the completion of conservation work at the Muhammad mosque, a site of international architectural importance, was held by the Icheri Sheher (Old City) State Historical and Architectural Reserve on 24 December 2010.

Specialists exchanged views on the conservation work carried out at the mosque and discussed the possibility of applying this experience to other architectural sites in the Old City. The work done has miraculously revitalized this ancient monument, making it clear that the same practice should also be applied to Azerbaijan’s other important sites.

Museum conservation work, carried out by the German firm Remmers and Austria’s Atelier Erich Pummer, began in March 2010. As part of the complex technological process, an area of 500m² was restored, using special equipment and materials, and then conserved. A vacuum impregnation technique was used to strengthen the stones. As a result, not a single stone was damaged. This was the first application of this process in Azerbaijan and is fully in line with international standards: using the latest techniques to take us back to Baku’s earliest days. References

About the author: Kamil Farhad oglu Ibrahimov, PhD in historical sciences, is sector director of the Old City State Historical-Architectural Reserve Office under the Cabinet of Ministers of the Azerbaijan Republic. He is the author of books and articles on historical and archaeological research in the Old City.