South Azerbaijan in the structure of Iran: Administrative, territorial divisions and the population 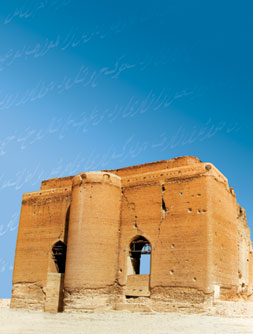 The early 19th century was a traumatic time for the Azerbaijani people. Their lands were divided as a result of wars between Russia and Iran in 1804-1813 and 1826-1828 years. Following the Treaty of Turkmenchay in 1828, Azerbaijani lands north of the River Araz were included in the Russian Empire. Azerbaijanis living south of the river were allocated to Iran. See our edition of January-February 2011, pp 56-58.

We will publish articles reflecting the history of South (Iranian) Azerbaijan as well as of the current Azerbaijan Republic. See our edition of November-December 2010, pp 68-73 for the first in this series. The articles are written by researchers and historians established in the field.

The province of Azerbaijan has been one of four provinces in Iran since 1828. In earlier times its territory covered Hamadan district (Sava, Arak and Karaj) in the south, the districts of Zanjan and Gazvin in the south-east, Maran district in the north and residential districts in the west, up to the Turkish border.

As directed by Rza Shah Pahlavi (1925-1941), in 1937 the tenth convocation of the Milli Majlis (National Council) of Iran adopted a law enacting a new administrative and territorial division of the country; this was done in order to ‘divide and rule’. In the new law, the word ‘province’ was replaced by the word ostan and the areas were listed by numbers rather than by names. The historical names of territories inhabited by non-Persians had been gradually changed, and national, cultural, political, economic and geographical territorial integrity was broken down. Thus state policy became one of assimilation. Firstly, the country was divided into 10 ostans (provinces) and 49 shahristans (districts). The ethnic territorial unity of the historical and geographical regions was deliberately destroyed and the result was chaos in the resulting administrative and territorial divisions. 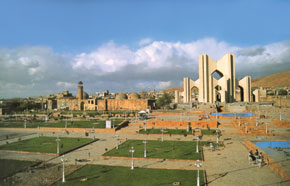 Maqbaratul Sho’ara. The Poets Mausoleum. Tabriz
Under this reorganisation, Zanjan (covering 53.4 thousand square metres), an area of Southern Azerbaijan with a population 98.85 per cent Azerbaijani, was included in the 1st ostan (Gilan province, with Rasht as its capital) which had no economic or geographical connection with Zanjan. Hamadan was added to the 5th Kurdistan ostan. Other territories of Azerbaijan were split into two. The 3rd (Eastern Azerbaijan, centred on Tabriz) and 4th (Western Azerbaijan, centred on Urmiya) ostans were the result. The new 3rd and 4th ostans covered areas of 67.1 and 43.7 thousand square metres respectively. Rza Shah, not satisfied with this division, divided the country into 17 new ostans in 1938. This time Zanjan was taken out of Gilan and affixed to the central ostan around Tehran. The historical Azerbaijani lands of Hamadan and Gazvin were once more left outside the newly defined area of Azerbaijan.

The main purposes for this division of the country were to reduce the number of Azerbaijani representatives standing for elections to the Iranian parliament, to sow seeds of national discord between the 80 nationalities, nations and ethnic groups living in the country, to disrupt the national development and unity of non-Persian nations and to promote assimilation, as well as to cause friction between non-Persian nations over territorial claims.

During the reign of Muhammad Rza Shah Pahlavi (1941-1979) the administrative and territorial policy of the state was based on more violent principles. In the early 1950s, the territory of Iran was divided into 10 ostans, in addition to the central ostan based on Tehran and, later, to 13 ostans; this was done in the name of improving the country’s administrative and territorial division. South Azerbaijan was divided between at least 3 ostans during these reorganisations. In 1954, Astara and surrounding areas were removed from the structure of Azerbaijan and made subordinate to the Gilan ostan; Sava was made subordinate to Tehran.

Laws on the administrative and territorial division of the country adopted in 1961 and 1971 aimed to further divide the non-Persian regions, to attract national minorities to Persian regions and to assimilate them. Under the law on administrative and territorial division adopted in the 1970s, Iran was divided into 13 ostans, 8 governorships and 151 districts. This division defined the central ostan (based on Tehran), then Gilan, Mazandaran, Eastern Azerbaijan (centred on Tabriz), Western Azerbaijan (centred on Urmiya), Bakhtaran, Khuzitan, Fars, Kerman, Khorasan, Sistan and Balujistan, Isfahan and Kurdistan. 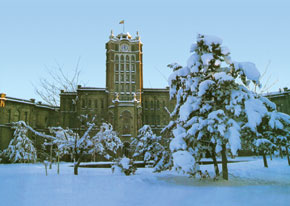 Tabriz City Hall in winter. Photos from East Azerbaijan by x.Siami. Tehran, 1996
Again Hamadan, Gazvin, Sava and Astara were affixed to ostans outside Azerbaijan. Hamadan and Zanjan first became independent governorships and later, in 1973, independent ostans. As a result, the Central Provinces of Iran, mainly inhabited by Persians, were expanded and their populations increased at the expense of Azerbaijani territories. A further negative aspect of these divisions for Azerbaijani integrity was that not only was the territory of Azerbaijan fragmented but its people were also ‘cropped’; Azerbaijanis now living in Persian-speaking administrative and territorial units were considered to be part of the Persian-speaking population. Thus, in spite of the fact that there were millions of Azerbaijanis living outside the territory defined as Azerbaijan by the Iran state in literature concerning the location and urbanisation of the population from 1960-1970, they were classified as non-Azerbaijanis.

After the Iranian revolution

After the Iranian revolution of 1979, the Azerbaijani Turks faced the ‘same old story’. Leaving aside other aspects of the revolution, the ‘cropping’ of Azerbaijani territory by administrative division of the country, in other words, separation from the territory and attachment to other regions, was continued in more rudimentary form.

It is accepted that territorial integrity and compact habitation are important conditions for protecting the existence of a nation with common roots and culture, strengthening its national potential and developing and improving its language and customs. Following the Iran revolution it became clear that the executive power – the Assembly of the Iran Islam Council - was going to retain the measures applied during the reign of the Pahlavis. While the country had been divided into 14 ostans before the revolution, later there were 28 and then 30 ostans. Under the pretext of eliminating Ardabil’s dependence on Tabriz, 9 cities, 21 districts (bahsh), 63 village structures (kandistan) and 2,221 residential districts surrounding Ardabil city, in all an area of 17,925.5 square kilometres, were detached from Southern Azerbaijan and combined into an ‘independent’ ostan. Talks continue now in the Assembly and mass media about the numbering of provinces as before, there are also suggestions to make Maraga a separate ostan and so on. In order to remove the ‘Turk’ from the name of Turkmensahra, a new ‘Gulustan’ ostan was included in Khorasan province, covering that area. The historical Azerbaijani lands of Hamadan and Gazvin were detached from Azerbaijani territory and included into ostans. Sava, Astara, Sultanabad, Arak and other regions still remain within Persian-speaking provinces. According to the latest information, there has been a recent update of the administrative and territorial division of the country. The city of Karaj, with its population of Turks, together with its surroundings, is on the modern political map of Iran under the name of the Alborz ostan.

In spite of the fact that the Persian author M. Shuar, in his work Narratives on the Azerbaijani language, denies the antiquity of the Azerbaijani language, he also admits that more than half of the country’s population consists of Azerbaijani Turks. Although he regrets that Turks are spread over a large part of Iranian territory, he also lists the following provinces, cities and districts which are outside the current borders of Azerbaijan but inhabited by Azerbaijanis: Khamsa province, Arak, Sultanabad, Sarabanda, Bozachli, Kamara, Hamadan and its surroundings near Khomeyn, Anzali, Shai, Khorasan, Bujnurd, Daragaz, Qashqay district, most areas around Tehran, Shahriyar, Karaj, Lavasanat, areas around Qom, Qazvin, Sava province, Kalhoran, Farahan etc. In 1949 the General Headquarters of the Iranian Army published the results of a census of the population and residential districts of the whole country in a 10-volume book. The introduction to the first volume promises the publication of a special volume with generalized information about residential districts by territory; the numbers, occupations etc. of the population by city, village, language and religion. However, that special volume has not yet been published or, in truth, it has been hidden. The newspaper ‘Hamshahri’, published in Tehran, wrote in one edition that there were currently about 80 nationalities and ethnic groupings in Iran among whom the most numerous were Turks (Azerbaijanis).

According to information from the Analytical and Information Centre of the National Liberation Movement of Southern Azerbaijan, published in the press in August 1999, the breakdown of the population living in Iran by ethnicity was as follows: 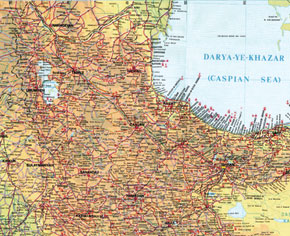 Geographical location of South Azerbaijan. From Map of the Islamic Republic of Iran. Tehran, 1999

According to the table, the total population of Iran was 70 million people, of whom 34 million (48.57 per cent) were Turkish-speaking people (Azerbaijanis and Turkmens and Qashqays). Actually the number of Azerbaijanis was much greater than indicated.

An exact description of the facts is difficult because there has not been a question about ethnicity on the population census either under the shahs or the current regime. Further, many Azerbaijanis migrate to different parts of Iran to earn a living because of the weak development of industry and infrastructure in South Azerbaijan and the lack of the facilities (water supply, seeds, animals, engineering etc.) necessary for peasants in rural areas. Also, many Azerbaijanis living in Azerbaijani cities, districts and residential dwellings are counted as part of the province’s local population (usually Persians) as these places have been attached to other provinces.

About the author: Akram Rahimli (Bije), Ph.D. in History, is a senior researcher at the Ziya Bunyadov Institute of Oriental Studies of the Azerbaijan National Academy of Sciences. He is the author of six books and numerous publications on the history, economics and literature of South Azerbaijan.