A History of Azerbaijan: from the Furthest Past to the Present Day 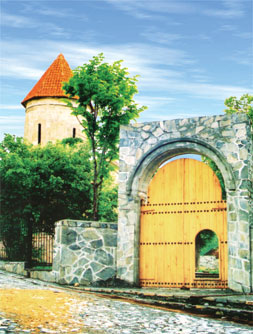 In our issues of March-April, May-June and September-October 2010, we presented three parts of the project Azerbaijani History: from the Furthest Past to the Present Day, by Karim Shukurov, PhD in History. In this issue we present the fourth part of the project.

The states of Atropatena and Albania: from their establishment to the Sassanids. The Seleucids, the Roman-Parthian wars in Azerbaijan (4th century BCE – 3rd century CE)

Atropatena. Following the death of Alexander the Great in 323 BCE in Babylon, a council was convened and Atropat’s son-in-law, Perdikka, was made regent of the state. The first division of the satraps took place here, but Lesser Media was not affected. This gave Atropat the opportunity to strength his rule. In 321 BCE, after Perdikka’s death, a second division took place, but Atropatena retained its territorial integrity. Thus, from that time onwards, Atropatena was accepted as an independent state.

The state of Atropatena covered mainly the current South (Iranian) Azerbaijan, some regions of the current Azerbaijan Republic and other neighbouring territories. The capital of the state was Qazaka and it was ruled by the Atropatis (in the 320s BCE) and the Atropatena Arsacids (early 3rd century – early 1st century BCE).

We have little information about the history of Atropatena from the 4th century to 70 BCE. But it is clear that after achieving independence, Atropatena had to defend it.

In the early period, the main threat to independence came from the Seleucid state (312-64 BCE), which appeared as the result of the splitting of the empire after the death of Alexander. The struggle against the Seleucids was successful for a long period. During the rule of Artabazd, Atropatena controlled a large area in South Azerbaijan as well as in the north. During the 220s BCE, it became a dependency of the Seleucid state. This continued until the 160s BCE. Then Atropatena again asserted its independence.

At this point, the Parthians, who lived within the Seleucid Empire, to the south-east of the Caspian Sea, began to develop their own state power (250 BCE – 220 CE). The Parthians (second half of the 2nd century to the early 1st century BCE) and the Romans (7th century BCE to the 4th century CE) became increasingly aggressive in west Asia.

The Armenian king Tigran II occupied the Atropatenan region of Simbaka in the 1st century BCE, but in 69 BCE he was defeated by the Roman commander Lucullus (117-56 BCE). In 68 and 67 BCE Tigran and his allies in turn defeated Lucullus. The Senate recalled Lucullus and replaced him with Pompey (106-48 BCE), who forced Tigran to sign a peace treaty favourable to Rome. 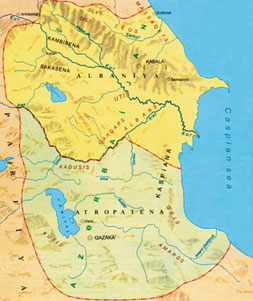 The Parthians defeated the Romans in a battle near the city of Carrhae (53 BCE). Mark Antony (83-30 BCE) continued the war against Parthia. Cleopatra (69-30 BCE), Queen of Egypt, helped him in a campaign which began in 36 BCE with a blockade of the Atropatenan city of Fraspa. This campaign also ended in defeat for the Romans.

Following Antony’s defeat, conflict broke out between Parthia and Atropatena, and this pushed the latter state closer to the Romans. Alexander, Antony’s son by Cleopatra, was betrothed to the daughter of the Atropatenan ruler. Octavius Augustus (63-14 BCE) defeated Antony and Cleopatra at the battle of Actium (31 BCE). Artabazd submitted to Octavius and was given Armenia. He held Armenia until 20 BCE.

Ariobarzan, son of Artabazd, lived in Rome for ten years and was also confirmed as ruler of Armenia. In 2 CE, a rebellion broke out. Rome and Atropatena together suppressed it and the Simbaka region was regained. The Atropati dynasty was replaced by a branch of the Arsacids approaching the year 20CE. Atropatena remained part of Parthia until the early 3rd century. The Sassanids accession to power put an end to Atropatena’s independence.

Its political independence and development had been the result of the economic progress it had made. As well as agriculture, city life had developed within the state. Its cities included Qazaka, Fraspa, Fanaspa and Aqanzana.

The word Azerbaijan is also associated with Atropatena. The Avesta, Zoroastrianism’s central text, was completed in Atropatena.

Albania. This state was formed in the 4th century BCE. It covered an area from the north-eastern foothills of the Great Caucasus mountain range to the Lesser Caucasus Mountains and the River Araz; from the River Gabirry (Iori) to the Caspian Sea and the Mil and Mughan lowlands. The first capital was Qabala and then Berda (from the 5th century CE).

The Albans put up resistance to attacks from the Romans, who reached the Caspian shores in the 80s and 90s CE. This was recorded in an inscription on the Boyukdash (Great Stone), which reads: In the 12th period of Emperor Domitian Caesar Augustus Germanicus. Centurion of the Fulminata Legion, L. Julius Maximus wrote this.

From the 70s onwards the Albans were attacked by tribes of Alans. The struggle between Rome and Parthia for control over Albania ended with the coming to power of the Arsacids (mid 1st century – 510 CE). From the early 4th century CE, Albania was part of the Sassanid Empire. 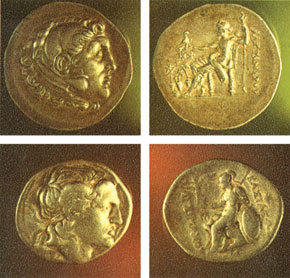 In 224, Ardashir Sassan I (224-239) defeated the Parthian ruler and put an end to that empire. This was the foundation of the New-Sassanid state. The new state soon became a powerful empire, ruling an area from Lower Mesopotamia and Syria to the River Indus; from the Great Caucasus to the Oman peninsula. The Sassanids’ expansionist policy led to Atropatena being occupied.

Atropatena, after being occupied, became a province of the Sassanid Empire. Although it lost its political independence, Atropatena remained a religious and cultural centre. Adurgushnasp (Azergeshesb), the main ateshgah (fire temple), was situated in the city of Shiz.

The population was divided into groups of priests, warriors, scribes and tax-payers. Most of the population were free peasants. Slaves worked in villages, temples and in the ruler’s mines. The main forms of land ownership were: communal, special properties gifted conditionally by the ruler, inherited land and temple property. There was a poll tax and other forms of taxation.

A new system of rule was introduced into Albania. Central government was strengthened and the ruler played a stronger role.

After being included into the Sassanid Empire, the Arsacids continued to rule Albania.

There were different groupings within the population: the azat, naharar, nahape and azqapet belonged to the ruling class; the lower classes included the shinakan and others.

King Urnayr (313-371) adopted Christianity in 313. During King Yesvagen’s reign (430-440) a new Albanian alphabet was introduced and schools were opened. Albanian rulers of the 4th and 5th centuries had an important role in religious affairs. The Aguen council of 488 was a very significant event in the history of the Albanian church. The council adopted a code of law consisting of a preface and twenty-one paragraphs. This increased the standing of the Albanian church.

The situation changed in the 6th and 7th centuries. In 506, at the Dvin assembly, the Albanian church adopted Monophysitism; in 551, an assembly declared its independence. In their struggle with the Byzantines, the Sassanids also adhered to Monophysitism. Later, as Byzantine influence increased, the Albanian and Georgian churches moved to Duophysitism. This situation continued until the arrival of Arab rule.

The rulers of Albania, in order to strengthen the state, made much use of marriages into the Sassanid dynasty. The Albanian king Urnayr married the sister of Shapur II (309-379). He was an ally of the shah in the battles of Amid (359) and Dzirav(371) during the Iran-Rome wars.

In the 5th century relations were strained: a defensive wall was built at Derbend (Chola) to keep out Turkish migrants. The Sassanid ruler Yezdigerd II (439-457) wanted to make Zoroastrianism the state religion. He sent 700 magi to the South Caucasus. Albania was under threat.

Vach’e II (440-463) signed a treaty with the Onagurs, part of the Hun-Bulgar union, for their assistance. In 451, the Sassanids were victorious at the battle of Avarayr. In 452, however, the Onagur themselves attacked Albania.

Christianity was again adopted, by Vach’e II following the death of Yezdigerd; the military divisions were disbanded in Chola and refused to acknowledge the new ruler Peroza (459-84).

There was war between Albania and the Sassanids from 459-463. Albania was defeated. Thus there was a break in the rule of the Arsacids from 463-487 and the state became a province. An anti-Sassanid movement began from 481-484. After the peace of Nvarsak, under Shah Valarshin (484-488), the rule of kings was re-established in Albania. Vachagan III came to the throne (487-510). During his reign, the Aguen church assembly (488) strengthened his rule.

In the mid 6th century, the Avars defeated the Sabirs, some of them settled between Aghstafa and Shamkir. From that time, the Khazar tribe became increasingly prominent within the Turkic kingdoms. In 553, they attacked Albania. Khosrov Anushirevan I (531-579), in defeating the Khazars, settled 10,000 people in Albania.

The peace treaty signed in 562 to end the Iran-Byzantine war, provided an opportunity for the northern borders to be strengthened. Khosrov I initiated administrative reforms. Albania and Atropaten joined the northern quarter, called the Adurbadaqan (Azerbaijan) kust.

At the end of the 6th century, Khosrov II (591-628) tightened his grip on the Sassanid Empire. The Sassanid-Byzantine war, which occurred during his reign (603-628), hurt Albania, too. Viro, the Albanian catholicos, exploited the situation to work against the Sassanid state, but when the rebellion failed, he fled to Ctesiphon. He only escaped execution by the patronage of Queen Shirin, and used this further to continue his participation in the political and religious life of Albania. As a result of his efforts, Khosrov II made Varaz Grigor, of the Mihranid dynasty, ruler of Girdman and Prince of Albania.

In 627, the Byzantines’ allies, the Khazars, attacked Albania. Gubad II (628) who came to power when Khosrov II was killed, released Viro from prison and the latter returned to Albania. Viro went to the headquarters of Shat, who was the son of the Khazar king. Albania had to submit to the Khazars. 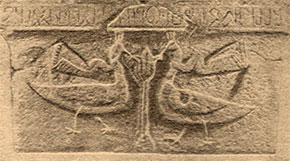 During the war with the Byzantines, Albania exploited the Sassanids’ weakened condition to achieve independence. The new Mihranid dynasty took power, under Varaz Grigor (628-636). In this way, the provincial regime which had existed from 510-627 came to an end; the rule of kings was re-established in Albania.

There was both state and private ownership of land in Albania. Private property was acquired by inheritance or by contract. There was also communal land and land owned by temple, church and individual peasants. Poll and other taxes were exacted. Economic life largely involved farming, animal husbandry and handicrafts. Cities and trading were developing.

The Atropatena-Albania period was a most important one; it lasted about one thousand years and left behind a rich political and cultural legacy.