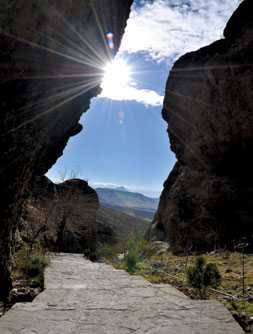 In our last issue we described the first half of a four-day trip to Nakhchivan. We had intended to write one article, but there is just so much to see

We did our best, we really did, but the Ordubad-Julfa road is just too photogenic, and who knew when we would be back? So there were quite a few photo-stops. But, eventually, we had to listen to our guide Gulbuta khanim’s pleading – and her promises that the day’s final sight ought not to be missed. Thus we turned north at Julfa onto the Nakhchivan city road and cameras were readied again as we swung right, straight towards Ilan Dag – Snake Mountain – whose gouged summit exercises an almost magnetic attraction; hardly surprising that Noah’s Ark failed to avoid it.

After passing hilly terrain, the road switches left and across an open plain the great cleft rock suddenly appeared, a village prostrate in awe at its foot (see last issue’s cover). But still we were being pressed onwards.... and dusk was approaching.

As we neared the village of Khanagar another huge rock loomed up in front of us – the forbidding Alinja castle once stood here and held as a prisoner Naimi (Fazlallah Astarabad) the founder of the Hurufi branch of Sufism. The mystic had made an enemy of Amir Timur (Tamerlane) – not often a survivable move - and he was executed here in 1394. A turbe has recently been built around the ancient grave; it stands alone on the slope opposite Alinja, looking back at the starkness of the castle rock. We heard the story of Naimi and his perhaps more famous student, Imaddadin Nesimi, who wrote sublime poetry to describe his belief in an internalised God and who was skinned alive for his heresy.

We were invited onto the turbe roof and as we gazed into the valley between the turbe and Alinja we became aware of the gentle, hollow clunk of small bells. Directly below, a flock of sheep was sauntering back down to the village; then, from the right, another flock appeared over a ridge. As the two flocks converged in the fading light and the world settled to rest, Azerbaijan’s best-loved traditional song eased into mind: 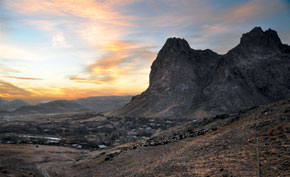 Shepherds return their flocks of sheep

The mood and meaning of Sarı Gəlin had eluded me for so long, but that moment was it... Our irritating camera stops on the way were instantly justified by that magical, serendi pitous moment.

Our third day, and we headed north-east; if Nakhchivan is fish-shaped, then we were aiming for the dorsal fin. But on the way we visited the source of another of the autonomous republic’s exports. If you supply salt (see last issue) then you surely create a thirst, and Badamli mineral water is just the thing. They say that 60 per cent of Azerbaijan’s mineral water is sourced from 250 springs in Nakhchivan. The source used for Badamli, the best known commercial product, is carefully encased and protected, but there are many other springs in the area with different levels of maintenance and different qualities of water; the minerals in some leaving clear traces as they leak across the ground. Naturally we tried them all and thrive on telling the tale. At some of the springs, the water is being forced upwards by considerable underground pressure and the natural gas behind it is captured and used to make fizzy drinks. In others, all kinds of Heath Robinson arrangements have been installed to control the flow and quenching the thirst can become quite an adventure.

Full of zi p and minerals, we returned to the main road and drove through the very neat-looking Shahbuz. The reasons for the town’s tidy appearance soon became clear as we began to pass small groups of locals trimming, clipping and sweeping... 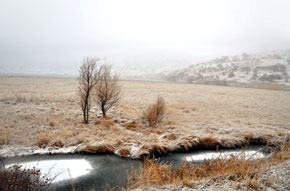 Floating island seeks the snow-flecked shore
.. or making the most of the spring-like weather, on Saturday 18 December, to catch up on the gossi p over tea and snacks. These activities looked very much like the work of subbotniks or imejiliks. Azerbaijanis always had a tradition of coming together at special times: weddings, holidays like Novruz and other celebrations, and helping each other to clean up and prepare (imejilik). It appears that Lenin learned from these customs and, as was the Soviet wont, it became systematised into compulsory ‘voluntary’ work on Saturdays – Russian subbota – hence subbotniks.

Moving on towards the north-eastern border with Armenia, the pleasant pastoral landscape began to give way to a rockier and wooded place. So we had some notice of the change of terrain, but we could hardly have expected the change in weather as the road climbed up to our destination, Batabat. In the space of 15 minutes or so, we went from a slightly disintegrating spring to a snowflinging blizzard at 2,050 metres according to the car’s altimeter. I cannot report on the balmy alpine meadows that surround the lake and which are a favourite picnic spot, but it was possible to see at least one of the floating islands as it was close to the lakeside. The drivers were concerned about negotiating the hairpins downwards so, after the obligatory exchange of snowballs we wound our way back down to civilisation and sunshine. No lack of variety in Nakhchivan.... did I mention the lunch in a railway carriage? Kilometres from the nearest railway line, naturally.

Returning to the capital and popping in to the dusty stadium to watch an energetic football training session, we then settled down for a leisurely and illuminating evening meal and talk with Zehmet Shahverdiyev, head of the History Department at Nakhchivan State University. We wondered what was in the Nakhchivan air, or water, that produced so many of Azerbaijan’s strong personalities in culture and politics (since independence, two of its presidents were born in the exclave). Perhaps it was the extremes of temperature, from -40o to +40o are possible, that instil a certain toughness of character, for better or worse. 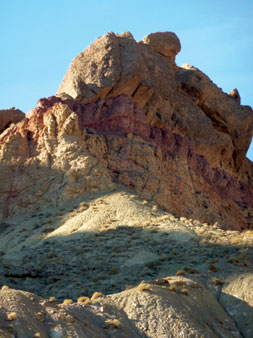 There’s no more dramatic rockery than Nakhchivan…
The republic has protected its identity through very trying times – most of its borderlands still face a nation with which it is officially at war – and is proud of the fact that no part was occupied even under heavy pressure during the active phase of the fighting with Armenia.

Zehmet muellim was a warm teller of Nakhchivan’s productive history and it was interesting to hear that Ordubad, as well as producing the world’s most exclusive lemons (see last issue), was also once a centre of the silk industry. Azerbaijan was not just part of the transit route along the Silk Road, Ordubad, along with Sheki, were significant producers of the glossy fabric. In the nineteenth century, Ordubad was a major supplier to Russia and then the USSR. The collapse of the Soviet Union was followed by an Armenian blockade during the war and, unlike in Sheki, silk production in the Nakhchivani town came to a halt, although there is talk now of a revival. Personal contact always gives the most human insight into the history of a place and after our dinner-time discussion, sunny dreams of mulberries and lemons filled the night.

Thus we were well-rested and ready for Gulbuta khanim’s bulging agenda on our last day. First, a quick tri p to the city market, for the colour – the spice stalls are always an aromatic and picturesque attraction in this part of the world, and the tinselled Christmas tree fronted by dancing Santas (Shakta Baba here) was just the kind of unexpected thing you come to expect. Then we set off south and back into the mountains.

Ashabi Kaf is associated with the story in Surah 18 of the Qur’an which tells of a group of young men believers who flee from a tyrannical regime with their dog and climb into a cave to find sanctuary. They sleep for 309 years and emerge, hungry, to find that a monotheistic society has developed. Eventually they return to the cave and disappear into a cleft in the mountain. Several countries lay claim to being home to the cave in the story, but Nakhchivanis believe that as the one at Ashabi Kaf is aligned with the sun as described in the surah and the entrance faces Mecca, this must be it.

It is a fine, dramatic atmospheric setting and was clearly a popular shrine, with a flow of visitors up the steep steps into the mountain and the open-air prayer area, or to the ‘black stone’ – possibly a meteorite – standing in a small area of its own. The rituals surrounding stones, water and trees must surely come from Zoroastrian times; shrines in Azerbaijan almost invariably have connections that go further back than Islam. 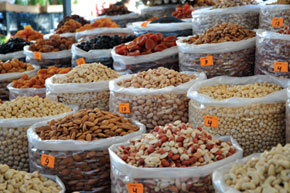 … or more abundant orchards
It was a beautiful clear day and as we rested after the climb back down with several glasses of healthy green tea, it was impossible not to share in the relaxed pleasure of the communal atmosphere.

Back onto the road south, I wondered how drivers resist the sirensight of Ilan Dag and its craggy colleagues. In Julfa, a privileged excursion was arranged to the Nakhchivan/Azerbaijan end of the century-old railway bridge spanning the River Araz to Iran – strictly no photographs allowed, but one of those thought-provoking experiences. Looking at the river flowing under the bridge and looking at the guard on the Iran side looking at us; “Why can’t I just walk the 100 metres or so and talk to that Azerbaijani, as well as to these ones?” (the less philosophical answer: Turkmenchay Treaty, 1828). As a border town, Julfa has an air of sterile military neatness; the now oversized railway station is painted in cheery pastel shades and the well-maintained line still optimistically heading southwards makes you believe there is still hope of human contact. The usual abundant hospitality applied at lunchtime also helped; the Azerbaijani belief that the guest is king has so far prevailed against western influence and is one of the nation’s most endearing traits.

One more port of call before returning to the capital, was Dari Dag, Millet Mountain, a health spa among the crags. There was little sign of vegetation; perhaps the name comes from the yellow-green, sulphurous water that steams and spurts out of the ground and is channelled, DIY-style, down to the bathhouse cum therapy centre below. The idea is to bathe and ease away those aches and pains that come on with rheumatism or age. Not being equipped to take a bath, I asked if it was also therapeutic taken internally; ‘Of course!’ was the translated answer, so I did. Going inside to peer through the steam at the bath I would have taken, I noticed a poster with the results of a chemical analysis of the water, item one: As 0.0027 mg/l – arsenic...hmm. Back in the city, there was just time to fit in a visit to the museum housing the life and works of Bahruz Kengerli, 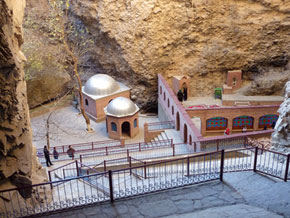 The mosque in a mountain, at Ashabi Kaf
a budding painter of the early twentieth century, who recorded the landscapes and the results of the tumultuous events of the time. Sadly short-lived (1892-1922) he perhaps epitomised both the promise and the squashing of the hopes for Azerbaijan’s first period of independence.

With a farewell nod to Momine Khatun’s mausoleum and respects to architect Ajemi Nakhchivani’s statue, with thanks to Gulbuta khanim Babayeva for a superb itinerary and to Zehmet Shahverdiyev muellim for his insights and the aromatic Ordubad lemons he presented us with at the airport (if ever a fruit turned to gold...) we took off with heads, notebooks and cameras full of stunning images and a determination to return one day to the beauty of legendary Nakhchivan.