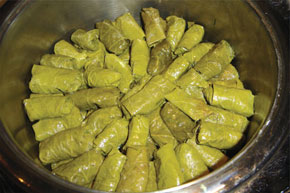 Following the recipes for levengi in our last issue, we continue our practical presentation of Azerbaijan’s cuisine, with instructions on how to make one of the most popular and widespread dishes.....

The name of this ancient national dish originates with the pure Azerbaijani verb doldurmag (to stuff) as it means various leaves, vegetables and fruits stuffed with minced meat. There are currently more than 25 varieties of dolma. In spring it is made of vine leaves, in summer of aubergines (egg-plants), tomatoes, peppers and cucumbers, in autumn it is made of cabbage leaves, apple and quince, in winter it is made of preserved vine leaves. The filling is prepared from minced meat, rice and aromatic herbs for dolma made of vine and cabbage leaves. Fried minced meat is used for other kinds of dolma. Using vine leaves in spring time is very healthy because they contain 70-80mg per 100g of vitamin C, while at this time of a year potatoes contain only 6-8mg per 100g of the vitamin. From this standpoint, fresh vine leaves are the healthier option.

In different regions of Azerbaijan, dolma are also made of the leaves of the lime tree, quince, beech tree, sorrel, bean leaves, penny cress and other plants.

Mince the boneless lamb and onions to make the dolma (stuffing). Add the rice, finely-chopped herbs (coriander, dill and mint), salt, pepper and, in some cases, chickpeas that have been soaked overnight to the mince. Parboil fresh vine leaves or boil preserved leaves until they are half-ready. Mix the filling well and wrap each vine leaf around an average of 25g of filling. 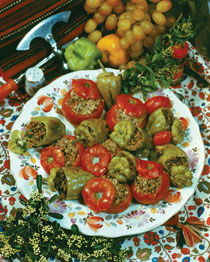 Terevez (vegetable) dolma
Place the dolma in a saucepan, add water to the saucepan to just cover the dolma and cook until ready (an hour). Serve the dolma with yoghurt in a separate bowl.

Yarpag dolmasi – stuffed vine leaves are wrapped in a sausage shape in the Shirvan region, Baku dolma are smaller and round and other regions make flat, square-shaped dolma.

To prepare stuffed vine leaves in Baku style, the vine leaves are not parboiled. They are washed in cold water, folded around the filling and strung together on a white thread. Each thread has 20 dolma and is bound. All the dolma are placed in a saucepan and cooked in 1 litre of water.

The dolma liquid is served in a bowl as a first course. Then a thread of dolma is served to each person with yogurt in a separate bowl.

The basic ingredients are the same as for the stuffed vine leaves, but the lamb is minced twice so that it cooks more quickly. Fresh lime leaves are dipped into hot water and taken out straight away. The lime leaf is stuffed with the mince and folded. The dolma is cooked for an hour in water. Serve with sourish yogurt.

Mince the lamb and onions. Add rice, shelled and chopped chestnuts, tomatoes, chopped coriander, pepper and salt to the mince and mix well. Simmer the whole cabbage in boiling water and peel off the leaves. Fold each leaf around the filling into a square or sausage shape. Make 3 dolma for each serving. Place them in a saucepan and cook by adding bouillon or water. Pour a sauce made of the sugar and vinegar over the dolma 20 minutes before they are cooked. Serve cabbage dolma with some of the cooking liquid spooned on top and cinnamon sprinkled over.

Tomatoes are not used in preparing stuffed cabbage leaves Baku-style. Whole, shelled chestnuts are placed into each dolma. A sauce made of doshab and wine vinegar is poured over the dolma 20 minutes before they are cooked. 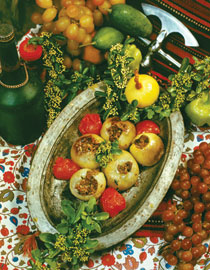 Top and tail the aubergines, put into cold, salted water and heat until boiling, parboil 1-2 minutes. Rub with your hands until softened, then slit them lengthways and remove the seeds. To sweat out any bitterness, salt the inside of the aubergines, put into a sieve and place them under a weight. Mince the fatty lamb and onions, add salt and pepper to the mince and fry, stirring continuously. Add chopped purple basil, coriander and cinnamon to the fried mince and spoon the filling into the aubergines. Lay the stuffed aubergines in a shallow saucepan, surround them with sliced tomatoes and steam, adding a little bouillon. Serve the stuffed aubergines with some of the cooking liquid spooned on top and with yoghurt mixed with garlic and cinnamon in a separate bowl. Stuffed aubergines served with pilaf are flavoured with coriander seeds instead of cinnamon.

Wash the peppers and scoop out the cores. Mince the lamb together with the lamb fat and onions. Add salt and pepper to the mince and mix well. Spoon the filling into the peppers, fry in hot butter (or vegetable oil) and steam adding a little bouillon for 15-20 minutes until they are cooked. Optional - add some rice (60 g) to the mince. Serve with yoghurt flavoured with cinnamon in a separate bowl. 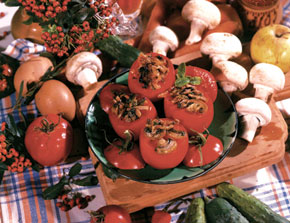 Fry the minced lamb in butter then add the saffron, sugar and the wine vinegar and cook until ready. Scoop out medium-size round apples, spoon in the filling and steam, adding some bouillon. Serve with the onion fried separately and placed on top.

Fry the minced lamb in butter then add the parboiled rice. Peel the cucumbers, halve them lengthways and scoop out the seeds. Spoon the filling into the cucumbers and roll in flour. Fry a little in butter and bake in an oven until cooked. Serve with chopped dill on top and yogurt flavoured with cinnamon in a separate bowl.

Clean and fillet the fish (kutum – omul or zander, a white fish) then mix with salt, pepper, finely chopped onion and coriander and mince together. De-stalk the vine leaves and parboil in hot water. Wrap each vine leaf around 25-30g of filling and place in a saucepan. Pour bouillon made of fish bones over the dolma and cook. Serve with yogurt in a separate bowl. 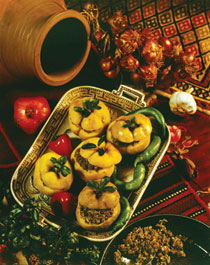 Mince the boneless lamb and onions. Add the rice, finely chopped herbs (coriander, dill and spring onion), salt and pepper to the mince. Parboil penny cress leaves for one minute. Mix the mince well and wrap each leaf around an average of 25g of filling. Place the dolma in a saucepan, add rose water to the saucepan to just cover the dolma and cook until ready (one hour). Serve the dolma with yoghurt in a separate bowl. This is common in the Ganja-Gazakh regions.

When there is no meat, cabbage or vine leaves are stuffed with a ‘false’ filling. Meatless dolma are cooked in all regions of Azerbaijan and this dish is called “dan dolmasi”, “chilpag (naked) dolma”, “yalanchi (false) dolma” and so on.

Chop the onions and herb finely and wash the rice. Add shelled, chopped chestnuts, tomatoes (or tomato paste), butter, pepper and salt to the onion, herb and rice and mix well. Simmer the whole cabbage in boiling water, peel off the leaves and wrap each leaf around the filling into a square shape. Make 3 dolma for each serving. Place the dolma in a saucepan, add water to just cover the dolma and cook for 1 hour.

Serve cabbage dolma with some of the cooking liquid spooned on top and cinnamon sprinkled over. Serve also with yogurt mixed with finely chopped garlic in a separate bowl.