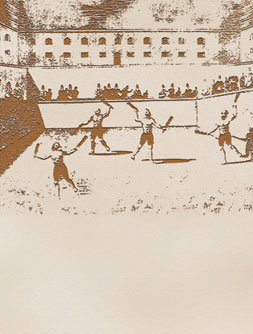 Zorkhana literally means a house of courage. Zorkhanas were historical sports centres in which the main ‘pehlevanlig’ (a variety of demonstrations of courage and strength) were performed (by pehlevans – very strong men, skilled in wrestling). Members of the zorkhana were regularly coached and competitions were held periodically. It is believed that these games originated in Azerbaijan. Zorkhanas built in the 17th and 18th centuries in the cities of Baku, Nakhchivan, Ganja, Ordubad and others have survived to the present. There are currently more than 20 functioning in Tabriz. The one located in “Icheri Sheher”, near Baku’s Mugham Theatre, is protected as a historical monument.

A glance at the history

After the formation of the Safavid state (1501), zorkhana sports developed and new buildings sprang up continuously. These buildings began to take on the role of social centres, attracting masses of people. Their construction became a most profitable venture and an organisation called Daghgah assembled young men and coached them.

The games were very popular and had the support of the Safavid state, thus there were many zorkhanas in the capital city, Tabriz. The Daghgah Centre was also situated there. Every quarter of big cities like Tabriz, Ganja, Ardabil, Isfahan, Nakhchivan, Baku and others had its own zorkhana, managed by the elders of the quarter. Noblemen and the rich also had their own home zorkhanas.

The notable Azerbaijani statesman and major poet, Shah Ismayil Khatai was himself a skilful exponent and a prominent warlord. His writing was also influenced by it. Shah Ismayil, who fashioned a centralized state, defeated an Ottoman wrestler in single combat during the battle of Chaldiran in 1514.

The architecture of the zorkhana and the making of the ‘sufra’

Zorkhanas were usually situated centrally in the cities. They were constructed a little below ground level, as the installation of a heating system was essential. An arch style was usually preferred. The vaulted roof was supported by arches and the building was quadrangular in shape. The interior resembled a modern circus building. The only window was placed in the middle of the vault and the interior space was split into two. The first part was the wrestling arena, in the middle of the building (an area large enough for 15-20 sportsmen to train), and a dais surrounding the arena, where spectators sat, was the second part. There would be seating for about 200-300 spectators. 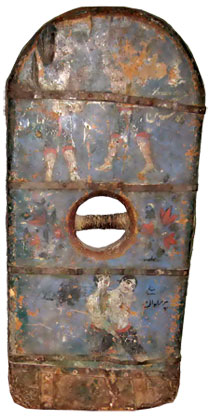 Apparatus used in a zorkhana – ‘Yekbaghir’ (or ‘sang’ – this was a wooden apparatus in two parts; it from 60kg to 200kg). The National Historical Museum of Azerbaijan
The wrestler’s arena was called the ‘kud’. ‘Later this area was known as the ‘sufra’ and it was considered sacred. The sufra was situated some 2 metres below the dais. In some zorkhanas it was not so deep. The sufra was made up in a particular way. First, brushwood was spread across the floor and tamped with grass. Then ashes and soft, sieved earth were cast over the surface. The composition of the sufra, which functioned like the sports mattress used in modern sports centres, was renewed once a year.

Under Safavid rule, skilful connoisseurs and masters of a trade were called ‘murshids’ (mature, skilful and experienced teacher) of their trades. It was the same in a zorkhana. The leading murshid sat at the top end of the sufra, on the dais. He was both manager and coach. The murshid was also called a ‘kohnasevar’, which literally means experienced horseman. The sevar in the zorkhana was a coach. His trainees were called ‘rands’. Later, the functions of murshid and kohnasevars were performed by one person. A sevar stood in the middle of the ground, ie. of the sufra, holding a stick in his hand and coaching rands in wrestling holds.

The games were managed by a murshid, who sat close to the sufra, in an elevated position. With a sign from the ‘miyandar’, who actually conducted the game on the sufra, music began and the game started.

The music of the zorkhana and the instruments played

The traditional zorkhana games were accompanied by the sounds of “Jangi” music (battle music) or by a very fast beating of the naghara (dumbak – an oriental drum) in dance rhythms. Zorkhana sportsmen showed their skills while moving to the rhythms of the rising and falling sounds of a dumbak. According to historical sources, other kinds of musical instruments were also used. There are images of musicians playing tambourines, zurnas (oriental percussion and wind instruments) and the saz (an Azerbaijani long-necked lute) in a zorkhana, in a picture from the 18th century. The murshid would read the poems of Nizami, Fuzuli and Mirnajat to the rhythm and ring the bell hanging above his head to signal the start and the end of games. Near the murshid was a fire or a lit brazier.

Aromatic herbs were smoked in the brazier. As the zorkhana was below ground level and the sufra was always humid, the wrestlers were often given ginger or cinnamon tea to counteract the effects. 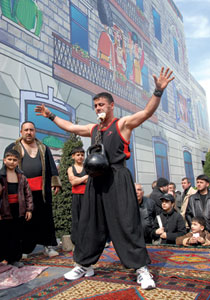 Zorkhana games at Novruz; feats of strength with the ‘gir’

The games and entertainments staged

There was usually a succession of different games during a zorkhana session. There were seven regular games, including mil oyunu (‘game of mil’, a mil being a weight used in pairs in performances of feats of strength), guluncsindirma (a back-stretching exercise), ayagdoyme (marching) and others. Wrestling and gurshagtutma (a variety of wrestling) were the main zorkhana events.

The wrestlers were ranked and graded. Beginners were called ‘tezekar’. The ‘nokheste’ had some experience. Wrestlers assigned as trainees to pehlevans and who had some knowledge of the games were called ‘noche’.

The most popular style of wrestling was ‘dustane’ (friendship). All wrestlers practised this style and it was used for coaching purposes. Competitive wrestling was referred to as hostile wrestling. But if there were signs of actual hostility between wrestlers then a referee would stop the game. After reconciling the combatants he declared the game to be over.

Power wrestling is thought to be the oldest style of wrestling. In the Middle Ages, this style was used when wrestlers competed to obtain the rank of pehlevan (power wrestler-strongman). These events were conducted with great ceremony and involved all members of the zorkhana. A veteran wrestler and a miyandar were the judges. A murshid gave the signal and the contest began.

Power wrestling was especially popular in the zorkhana games conducted in Nakhchivan. Very large, open-air zorkhanas were staged to the stirring sounds of Jangi music.

Pehlevans usually stood face to face and waited for the excitement to build. The people surrounding the area would sing songs before the wrestling began. The wrestling in Nakhchivan was a little different. Before the contest, the pehlevans entered the arena, knelt face to face with their hands on their heads. In power wrestling the most successful manoeuvre was to apply a hold called the ‘dere’, by grasping the hands and ankles. At the end of the contest the zorkhana was dismantled. 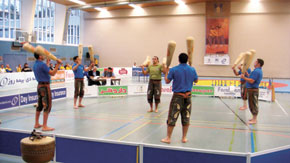 The tradition of zorkhana games, enjoyed with great enthusiasm in the Middle Ages, has never been lost. The traditions are upheld to this day in the south-west of the republic.

A dance group named “Zorkhana” was formed in the city of Sheki in 1954 and became famous for their guest performances at zorkhana games abroad. The group changed its name to the Folk group in 1981. In 1984 its name changed again and it became the Pehlevanlar (wrestlers-strongmen) family-circus group. The group organized shows involving weightlifting, trucks being driven over strongmen, the halting of moving cars and so on.

Dozens of groups of strongmen perform in Azerbaijan nowadays. In the ancient traditions demonstrations of strength were not limited to weight lifting, pulling heavy objects (such as cars) with the hair and teeth, and other displays of bodily strength.

Swordsmanship, striking with a mace, shooting at a target and wrestling were added to the range of displays of strength. At present, to achieve the title ‘pehlevan’ the aspirant must outdo the performances of previous pehlevans, or set a new record. Interest in zorkhana games is on the increase. In 2005, the International Federation of Zorkhana Sports was established. It now has 55 members. The Azerbaijan Federation of Zorkhana Sports (AFZS) was founded in 2007. The AFZS undertakes various activities to popularise and develop these sports within the republic.

Azerbaijani pehlevans have been participating in international pehlevanlig competitions since 2006. An Azerbaijani team took part in the international tournament which took place in Mashhad in Iran in the same year and achieved 4th place in the team championship. Azerbaijan’s representatives were 2nd in the team competition at the 1st European Championship in Saarbrucken, Germany in 2007. Azerbaijan’s zorkhana sportsmen were successful at international tournaments organised in the cities of Tabriz and Kish in 2008. At the World Championship held in Bussan, Korea in 2009, in which 25 countries were represented, our team took 3rd place. The Azerbaijani team was first in the World Cup competition organised in Baku in March 2009. The national team took first place in the all-round events of zorkhana and pehlevanlig sports at the 2nd European Championship held in Frankfurt, Germany in the middle of December 2009 – 20 countries were represented there.

On 15-17 March 2009, sportsmen from 12 countries (including Azerbaijan, Iran, Afghanistan, Uganda, Nigeria, Germany, the RSA, Syria, Nepal and Algeria) participated in the 1st World Cup for all-round events in zorkhana and pehlevanlig sports. 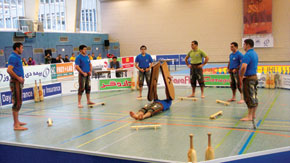