“Season of mists and mellow fruitfulness” 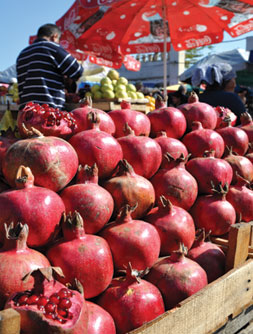 John Keats would have revelled in the natural produce of Azerbaijan – no, not the oil this time, but the luscious fruits of the earth grown here, fit to make any pen drool with anticipation. Some say the story of the Garden of Eden had its origins in this region – well, the fruit would certainly tempt any Eve.

Of course our minds traditionally turn to harvest in autumn, but Azerbaijan’s varied climate (9 of the world’s 11 climatic zones can be found in this geographically small country) ensures that fresh fruit is picked all year round.

Fresh, naturally grown fruit in January? – Yes, thanks to the Lenkeran region in the south, which itself is said to encompass 7 climatic regions, including the sub-tropical. Among the many fruits grown here are citrus, thus the refreshingly sweet bite of January’s breezes and the sourness of its gloomy, wet days are reflected in the taste of the kumquats (eaten, skin and all) that appear in this month – their golden hue a promise of sunnier days ahead.

February and March see the appearance of ‘Japanese khurma’ – I’ve never seen this in the UK, a small, black sweet fruit, with a lot of flat seeds. Perhaps it is its fertility that gives it a regular place on the Novruz table – usually dried by then - for this celebration of a new cycle of life.

May enters with the very sharp taste of ‘alcha’ – sour, unripe plums, usually taken with a literal pinch of salt; they certainly poke the taste buds out of winter hibernation and spark them into full working order, ready to appreciate the sweetness that follows. Succulent, naturally plump strawberries have been seen on the streets by the middle of the month and are soon followed by cherries and apricots. The first fruits also begin to drop into our hands from the many mulberry trees in Baku. Fresh apricots were one of the many revelations I experienced here, having been more used to the sickly variety that grew out of tins in England. 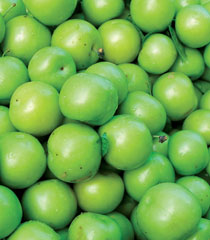 June, July and August see the cornucopia of Azerbaijani fruit spilling out in juicy, ripe abundance. There is so much fruit that much of it is home-converted to jam, compote or cordial and stored for the winter months. If you can’t get to Azerbaijan, the good news is that the commercial potential of these ‘alternate’ natural resources has been realised and there are now some excellent locally-produced fruit juices on the market.

The June sun first blushes the cherries into rich darkness as they reach full, soft maturity – and one of the joys of capitalism is that abundance=cheaper; thus life in an Azerbaijani summer really can be “just a bowl of cherries”. Alongside the cherries, the berries: after strawberries come raspberries, mulberries, solanberries... (beware! picking the red mulberries leaves you with the hands of Lady Macbeth; the juice gets everywhere).

July and August are a time of vast overindulgence in cheap fruit. A pyramid of watermelons by the roadside en route to the sea could well be Azerbaijan’s national summer emblem. No visit to a summer house (‘dacha’) is complete without at least one bowling-ball-sized globe of deliciously thirst-quenching, ice-crisp, red pulp. The golden honeydew melons in the smaller pyramid alongside may have a more sophisticated taste, but the stripey green pile is the choice for sheer summer indulgence.

Plums, peaches, pears and grapes are also August fruits in Azerbaijan but, for my taste, the best comes at the end of the month - perhaps, again, as a result of the English experience. 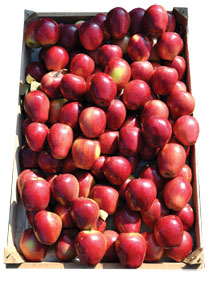 Guba’s temptation
All those years ago in my childhood, I hardly connected the dry, brown, leather-like stuff we pulled out of plastic wrapping at Christmas with fruit. It was even harder to connect that memory with the fresh variety – a soft, yellow-green bulb bursting open to reveal its juicy, sweet, vibrant-red flesh. The fig is now my favourite summer fruit and home-made, whole-fig jam sustains the body and its hopes (for the following summer) through the winter.

Early September is the time to visit the northern areas of Azerbaijan. I challenge anyone to take the road to Guba and not stop at one of the roadside stalls. The region is particularly noted for its apples, but the locals really know how to make such a show of the range of fruits that it is absolutely impossible to drive past. The ‘bucket bazaar’ in Vandam near Qabala (fruit sold by the bucketful) is a smaller, but similarly tempting, experience.

Of course, apples, pears, oranges and grapes are the locally-grown staples through early autumn, but at the end of September pomegranates and quince appear. The former has recently been something of a health-fad, in Europe at least, and the juice has that full-bodied, unsweetened flavour that you think must be doing you some good. Nowadays, as I grab a handful of the little ruby-coated seeds, I always smile to remember picking them out with a pin, as a boy, to eat one-by-one. The English are just so refined!

Before Azerbaijan, I only remember quince as something eaten sliced by “The Owl and the Pussycat” in Edward Lear’s poem, 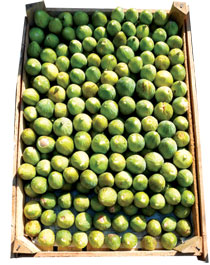 Figs - Better fresh than dried
but here I’ve drunk it (home-made cordial), eaten it (as compote and with cabbage- leaf dolma) and fought a cough with its boiled seeds. How did I ever live without it?

October sees the first (green) mandarins emerging from Lenkeran and feijoa – another discovery for this writer. Soft, green and the size of a small egg, it has an aromatic, cream-coloured flesh with a tangy taste that reminds me of pear drops. You can use a spoon, but the tastiest way is to knead it until soft, split the skin... and suck.

The pièce de résistance in Azerbaijan’s gallery of fruit also first appears in October, but is at its best at the end of the year. Genuinely encountered for the first time here, I didn’t touch it at first, for the simple reason that I didn’t know what to do with it, or even whether it was sweet or savoury. It looks like a giant orange tomato and Azerbaijanis call it ‘khurma’ – which is a little confusing, because dates are also ‘khurma’ and there is the ‘Japanese khurma’ I mentioned that appears in February. In English it’s persimmon and is surely the most sensuous of fruits – not at all ‘mellow’. There are basically two kinds in the markets here: hard and soft, the latter being more common. What to do with it? Well, this depends on your level of refinement and the company you are in. Anyway, it’s best eaten fresh and raw, although the dried version is certainly tastier than dried figs.The soft version is very soft and the slightly waxy skin is quite delicate and easily split. The pulp inside is jelly-like and deliciously sweet, with a slightly dry after-taste. So: you can split the skin and spoon out the pulp, or cut it into quarters and eat it like a quartered orange, or go for the total sensuous (if messy) experience of biting into the skin and sucking out the pulp. The hard version is best eaten quartered. I’ve read that there are cookery recipes which use khurma, but I can’t imagine they can be anything like the fruit as nature intended. 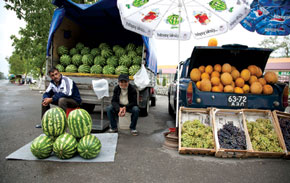 Summer weekend? – A melon is a must!

I hope his brief round-up of a year in thrall to Azerbaijani fruit gives some idea of the experience. I haven’t even mentioned the nuts from Nij – or the kiwi fruit – and have skated over some of the more familiar ones. The reason for the calendar is to make the point that the fruit on the market here is still seasonal. There is something reassuring about looking at the fruit stalls and knowing where you are in the year. Fruit in Azerbaijan is still judged by its taste rather than by its conformity to standard dimensions or colour; so go ahead, suck it and see - you’re in for a sweet surprise!