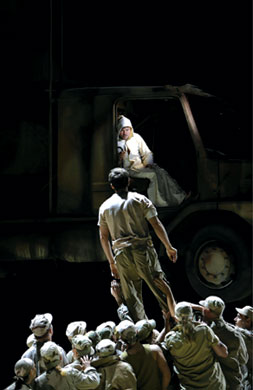 On 20 August this year, The European Azerbaijan Society (TEAS) supported the world première of a new adaptation of ‘Leyli and Majnun’ at the Jahrhunderthalle, in Bochum, Germany. The opera was performed on the opening night of the ‘Ruhrtriennale Music and Arts Festival’, which continued for nearly two months. The audience included Mrs Ute Schäfer, Minister for Families, Children, Youth, Culture and Sports for North Rhine-Westphalia and Mrs Hannelore Kraft, Minister-President for North Rhine-Westphalia. ‘Leyli and Majnun’ is a classic tale of separated lovers, well-known across the Middle East and Central Asia, and particularly significant in the history of Azerbaijani literature. The first truly authoritative written version was that of the 12th century poet Nizami Ganjavi (1141-1209). As his name suggests, Nizami was born in the city of Ganja; he also died there and his impressive mausoleum can still be visited near the city, in the west of Azerbaijan. The literary language in Nizami’s day was Persian; thus his celebrated romantic poem was originally written in that language.

It was Muhammad Fuzuli (1480-1562) who produced the great Azerbaijani language version of ‘Leyli and Majnun’. It was to him that Uzeyir Hajibeyov (1885-1948) looked when producing an operatic rendition of the story. Hajibeyov’s opera, combining elements of both western and eastern music, was in fact the first to be staged in the Muslim world – in 1908 – musically, a revolutionary moment in history.

Nizami’s poem was chosen for adaptation by the Palestinian-Israeli composer Samir Odeh-Tamimi and poet and playwright Albert Ostermaier for the opera produced in Bochum. It was directed by Willy Decker, with Peter Rundel conducting the orchestra, and the production was overseen by Eva-Maria Voigtländer, Chief Dramaturg. 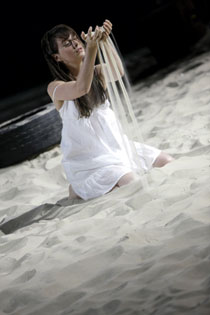 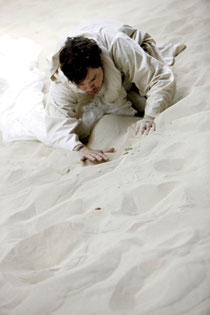 This year’s ‘Ruhrtriennale’ had a clear theme, as noted in the festival programme:

This year’s artistic voyage of discovery, entitled Migration – Searching for the Path, explores the world of Islamic thinking and traces a line from the roots of ancient Islamic mysticism and myth to contemporary issues in this culture which is in some respects familiar and yet often very foreign. 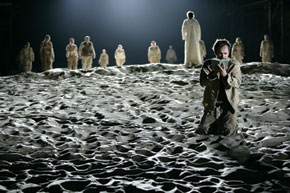 Aleksandar Radenkovic as Ibn Salam
“Our path is a spiritual pilgrimage using the tools of art and sets out across the wide, open and to us nevertheless frequently inaccessible landscape of Islamic culture.”

‘Leyli and Majnun’ was a very appropriate choice; still not widely known in the West, its theme is a search for the path to pure love. The lovers, Leyli and Majnun, are prevented from being together by their families; Leyli is promised to another and Majnun is driven to distraction, seeking isolation as he struggles to come to terms with love denied. There is a very definite philosophical aspect to the story as Majnun’s search becomes a spiritual pilgrimage to the ideal, rather than material, love.

In Bochum, the main protagonists were played by Nils Cooper (Majnun) and Irene Kugler (Leyli), both of whom brought the required sense of pathos to their roles. All the artists delivered magnificent performances in a moving interpretation of this landmark work. At the post-performance reception, attended by the artists, distinguished guests and sponsors, the organisers expressed their gratitude to TEAS for its generous support of the event. Tale Heydarov, TEAS Chairman, delivered a speech in which he recalled that Azerbaijan was the first eastern country to stage opera and ballet. He described the new version of ‘Leyli and Majnun’ as: “a world-class production of the ‘Romeo and Juliet’ of the East” and extended an invitation to those present to visit Azerbaijan to see Hajibeyov’s adaptation. Tale Heydarov took the opportunity to greet Mrs Kraft. Seven more performances of ‘Leyli and Majnun’ were also staged during the festival. 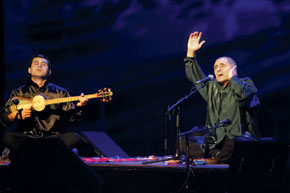 Azerbaijani participation in the ‘Ruhrtriennale’ festival was not limited to its literature – its music was also represented. On 3 October, the stage was taken by the great mugham singer Alim Qasimov, accompanied, as often nowadays, by his highly talented daughter Fergana Qasimova. This duo, who have done so much to popularise their country’s music around the world, complemented the topic central to ‘Leyli and Majnun’, treating the audience to music from their project ‘Love’s Deep Ocean’.

For more information on the Azerbaijani contribution to the festival, visit www.ruhrtriennale.de.