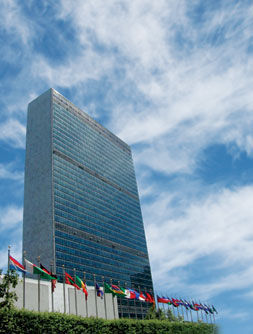 On 13 September 2010, President Ilham Aliyev of the Republic of Azerbaijan made a speech at the 65th session of the United Nations General Assembly.

The United Nations Organization was established in 1945. Azerbaijan was admitted to membership of the UNO on 2 March 1992, after achieving independence (18 October 1991). Since then Azerbaijan has collaborated closely with the UNO. Within the framework of this collaboration, work towards a resolution of the Azerbaijan-Armenian, Nagorno-Karabakh conflict is its main priority.

The speech by President Ilham Aliyev at the 65th session of the UN General Assembly reflected a conceptual approach towards Azerbaijan-UNO collaboration. It expresses a fair attitude towards the Armenian occupation of Azerbaijani lands, the policy carried out by Armenia in the occupied territories and it refers to the four resolutions passed by the Security Council of the UNO. The speech also contains the Azerbaijani view of a resolution of the Azerbaijan-Armenian, Nagorno-Karabakh conflict. The political, social and economic and cultural development of contemporary Azerbaijan is emphasised. Finally, the speech makes clear Azerbaijan’s continuous support to developing and underdeveloped countries, as well as to countries suffering from natural disasters – a more frequent occurrence recently. The president also noted in his speech that Azerbaijan would continue to contribute to the implementation of development targets agreed within the UN framework.

Given the importance of the speech made by President Aliyev at the 65th session of the UN General Assembly, we present below the text in full.

I have the honour to join previous speakers in congratulating H.E. Mr. Joseph Deiss on his election to the post of President of the 65th session of the United Nations General Assembly and wish him every success in this highly responsible post, and I would like to thank his predecessor Dr. Ali Abdussalam Treki for his productive work.

Mr. President,
Azerbaijan recognizes the central role of the United Nations in maintaining international peace and security, promoting sustainable development and advocating fundamental freedoms for the people of the world. 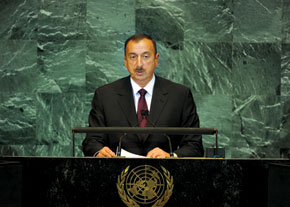 President of the Republic of Azerbaijan, Ilham Aliyev
Azerbaijan believes that the United Nations should be stronger and capable of engaging in a range of global issues in every part of the world, as well as addressing the aspirations and concerns of each member state.

As a country suffering from the devastation of war and occupation, Azerbaijan strongly believes that faithful observance of the internationally accepted norms and principles of international law concerning good neighbourliness, friendly relations and cooperation between states, and the fulfilment in good faith of the obligations assumed by states, are of the greatest importance for the maintenance of international peace and security.

The ongoing armed conflict between Armenia and Azerbaijan still represents a major threat to international and regional peace and security. The conflict has resulted in the occupation of one fifth of Azerbaijan’s lands and has made approximately one out of every nine people in my country an internally displaced person or refugee.

It has been recognized internationally that the Republic of Armenia bears the primary responsibility for occupying Azerbaijan’s territories, committing the most serious international crimes during the conflict, carrying out ethnic cleansing, and trying to create a mono-ethnic culture in the captured Azerbaijani territories.

The United Nations Security Council has adopted four resolutions and expressed its full support for the sovereignty and territorial integrity of Azerbaijan and the inadmissibility of the use of force to acquire territory. It has also recognized that Nagorno-Karabakh is part of Azerbaijan and has called for the immediate, full and unconditional withdrawal of the occupying forces from all occupied territories of Azerbaijan. The United Nations General Assembly and other international organizations, including the OSCE, Council of Europe, European Parliament and the Organization of the Islamic Conference, have adopted a similar position. Unfortunately, despite the consolidated position of the international community, Azerbaijani territories continue to remain under occupation.

Armenia, so far, instead of negotiating in good faith with a view to finding a durable solution to the conflict as soon as possible, prefers escalation with unpredictable consequences.

Consistent measures are also being taken by Armenia with the aim of altering historical and cultural features of the occupied areas in an attempt to remove any signs testifying to their original Azerbaijani cultural and historical roots. As a result, no single Azerbaijani historical or cultural monument has been left undamaged and no sacred site has escaped vandalism in the occupied territories.

The implantation of settlers as well as the destruction and appropriation of historical and cultural heritage in the occupied areas, along with various forms of illegal activity there, directly affect the property rights of the internally displaced persons.

The lack of agreement on political issues, the protracted nature of the conflict and the prolonged negotiations should not be used as a pretext for not addressing other problems arising from the continued and deliberate disrespect for international humanitarian law and international human rights law in connection with the conflict. 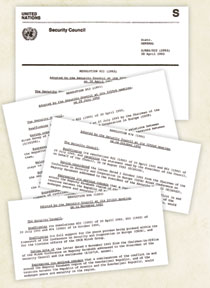 The four United Nations Security Council resolutions on the Nagorno Karabagh region of Azerbaijan
Mr. President,
The soonest resolution of the armed conflict in and around the Nagorno-Karabakh region of Azerbaijan remains a primary task for us. The OSCE Minsk Group Co-Chairs countries extend their efforts to bring peace and stability to the region. A resolution of the conflict envisages the withdrawal of Armenian forces from the occupied Azerbaijani territories within a fixed time framework, the restoration of all communications, the return of all refugees and internally displaced persons to their places of origin, international security guarantees, including peacekeeping forces and interim status for Nagorno-Karabakh. We are ready to continue the talks in good faith to finalise the status of Nagorno-Karabakh within the Republic of Azerbaijan.

The step-by-step approach introduced to Armenia and Azerbaijan in December 2009 by the OSCE Minsk Group Co-Chairs is accepted by Azerbaijan in principle as a basis for achieving a lasting resolution of the Armenia-Azerbaijan Nagorno-Karabakh conflict. Unfortunately, Armenia still delays giving a definite answer to the Co-Chairs’ proposal.

Azerbaijan highly appreciates the principled stand by member states on issues of vital importance for Azerbaijan pertaining to its sovereignty and territorial integrity. We rely on the continued solidarity of the international community with Azerbaijan’s just position and on their valuable support for our initiatives within the United Nations aimed at addressing the existing challenges in an impartial, open and comprehensive manner.

Ladies and Gentlemen,
Despite the unresolved conflict over Nagorno-Karabakh and occupied territories, the government of Azerbaijan has succeeded in guaranteeing political stability, democratic development, economic prosperity and social welfare in the country. Azerbaijan today has one of the world’s most rapidly developing economies. Just within the last five years, Azerbaijan has almost tripled its GDP.

The strategic geographical location of Azerbaijan, at the intersection of major trade routes along the emerging East-West and North-South transport and energy corridors, is an important asset and can help the country become a hub for energy and infrastructure.

Azerbaijan possesses considerable proven oil and gas reserves, and there are good prospects of new discoveries. A modern infrastructure for the transportation of hydrocarbons to international markets has already been created in Azerbaijan and it is being used to export oil and natural gas; this can diversify and strengthen international energy security. This is particularly crucial for gas supplies. With proven reserves of 2 tcm of natural gas and a potential of up to 5 tcm or even more, Azerbaijan is ready to make its own contribution towards ensuring stable development for the world’s gas market.

Another globally important project, on which Azerbaijan is working very intensively with its neighbours, is the building and enhancement of the region’s railway infrastructure. This rail connection will open up enormous opportunities for delivering cargo of all kinds between Asia and Europe.

As a very active member of the Extractive Industries Transparency Initiative, Azerbaijan uses its energy revenues in an open and transparent manner for the development of the country, particularly the cultivation of human capital and the eradication of poverty. Thus, we were able to achieve a dramatic reduction in poverty, from 49 percent in 2003 to 11 percent in 2009. And I strongly believe that through sustainable development Azerbaijan will achieve even more in this area in the years to come. 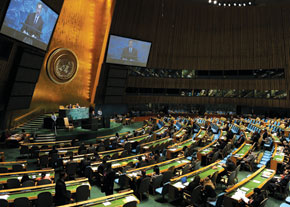 65th Session of the UN General Assembly
Mr. President,
Azerbaijan has always been a place of coexistence and tolerance between different faiths, ethnic groups and philosophies. As an active member of the Group of Friends of the Alliance of Civilizations, Azerbaijan contributes to the promotion of inter-religious and intercultural dialogue based on mutual respect and understanding. Azerbaijan hosted the World Summit of Religious Leaders of 32 states in spring of this year and has offered to host the World Forum for Intercultural Dialogue in April 2011.

One of the most serious and long-term challenges affecting every part of the globe is climate change. We in Azerbaijan have proclaimed 2010 a year of ecology and have adopted various special programmes of environmental protection.

Azerbaijan demonstrates full support, and undertakes ceaseless efforts, for the promotion of sustainable development and global prosperity for all, paying particular attention to the special needs and vulnerabilities of developing and less-developed countries, as well as to those recovering from natural disasters. Azerbaijan will continue to contribute to the realization of the developmental aims and objectives agreed within the United Nations.

58430
CultureSpring 2016
The Novruz Tuesdays
by Tahir Shahbazov
more
SURVEY
Which subjects are you looking for on this website?
24%Arts & Culture
12%Food
34%History
6%Sport
25%Travel & Tourism
Number of votes: 699
VIDEOS