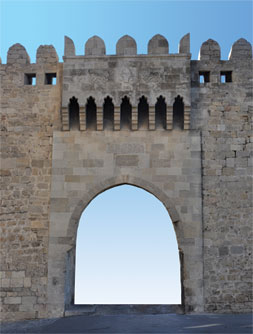 Of the 500-metre section of Baku’s fortress walls which remain intact, the grandest and stateliest feature stands at the junction of Nizami Square and Youth Square (which used to be called Duma Square, or Hasimov Square).
The Double Shamakha Gate, which is still in very good condition, connects two of the city’s most beautiful areas – ancient Baku, or the Inner City, and the “Outer City”, or old Baku, which grew and expanded over approximately 20 to 25 years during the “oil boom” (1872-1913). Today, too, it seems that competition continues between the sumptuous mansions built by Baku millionaires in the streets of the old city during the “oil boom” period:- for their wealth of appearance, the delicacy of their architecture and the beauty of the motifs on their walls.

The fortress walls, which separate medieval Baku from capitalist Baku even today, have a unique history. The most ancient part of these walls was erected in the 12th century, during the rule of the Kasrani dynasty. This was discovered during restoration work on the walls. A three-line text was found on a stone in one part of the wall. Written in Arabic script, it read: “The construction of this wall was ordered by the glorious, wise, just, victorious, ruling monarch... supporter of Islam and of Muslims, the great Shirvanshah Abdul Khoja Manujohr” (1120-1149).

So, the fortress wall surrounded Baku three centuries before the famous Palace of the Shirvanshahs was built. At that time, especially in a period of military failure, the centre of the Shirvan shahdom was periodically moved from Shamakha to Baku. Until the middle of the 19th century, the city was surrounded by a double fortress wall on land and a single earth barrier on the sea side. In addition, in the southern part of the earth barrier, there were two further walls, perpendicular to the barrier. These walls were bent towards the sea and extended into the Caspian, creating a very reliable sheltered harbour for ships.

In addition to the double wall, a ditch was also dug on the land side, around the fortress. At moments of danger, the ditch could easily be filled with water from underground sources. Thus, medieval laws and rules for the establishment of fortifications were fully complied with. The inner wall of the Baku fortress, the higher of the two, was built under Shah Manujohr (12th century), while the lower outer barrier was erected in 1608-1609, during the reign of Shah Abbas, of the Safavid dynasty. The then ruler of the city, Zulfuqar khan, led the work to build the outer wall. However, from 1826 Baku’s fortress walls were no longer used for their original purpose and the walls were “renovated” in appearance. The crenellations on top of the fortress walls were removed in many places because they impeded the installation of artillery mountings (the current merlon crenellations were restored later, in the 1930s).

The “oil boom” which started in 1872 brought unusually rapid changes, both to the face of this ancient Oriental fortress city and to its traditional lifestyle, including the pace of life. The daily growth in the number of migrants who thronged into the city from various foreign countries - people who arrived and fixed their destiny to this city for long periods, sometimes forever - required the city to expand. Indeed, within a decade the question of extending the city’s boundaries was already being discussed. At first it was planned to tackle the problem by means of an apparently simple expedient – demolishing Baku’s ancient fortress walls. 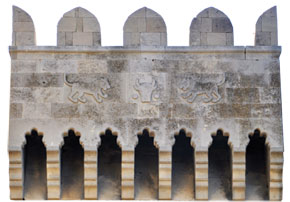 Baku´s coat of arms, relief on the Double Gates
Case number 115, dated 1868, in the Baku Emergencies Department makes it clear that, back in 1868, Baku’s military governor “lodged a petition with the Trans-Caucasus military district to demolish and remove the Baku fortress, the ditches around it, the remains of fortifications and outside walls with the aim of making the city of Baku more comfortable and taking into consideration the fact that there is a real need to expand the city by means of adding new districts”. This petition was presented to the military minister and he said, in a report dated 13 August 1870, that His Majesty Aleksandr II “on 1 August of the same year, 1870, showed high courtesy and allowed: the filling of the ditch and demolition of the field fortification... in front of the Baku fortress; and to preserve the old walls as a monument of the ancient period”.

We can only make assumptions now about the external appearance of the Baku fortress walls. However, certain traces of them do remain. The Shah Abbas gate (the right-hand side of the present-day Double Fortress Gate) located right in front of the Shamakha gate in the inner wall was the main gate in the outer wall. After instructions were received to demolish the outer wall, city craftsmen, in order to commemorate the Shah Abbas gate, decided to make a similar gate and “move” it to the inner wall of the Baku fortress; this they did with great skill. Nowadays, when you look closely at the fortress’s double gate, you can see that the colour of the coating stone in the left-hand arch is lighter. This is the only sign that it was built later.

The main point is that it was possible to preserve the bas-relief, Baku’s medieval symbol, on both gates. This symbol existed long, long before the development of industry in Baku and the flurry generated by oil extraction.

Down to the present day, on both the Shamakha gate and the Shah Abbas gate, there is a stone “clew” with two small circles around it, made by a skilful craftsman.

This graphic and very interesting sample of medieval oriental heraldry contains many elements...

When the German traveller and scientist Kaempfer was in Baku in 1683, he tried to unravel the meaning of this ancient city coat of arms with the help of local experts. Could this guest have imagined then that the current generation of Bakuvians would be grateful to him for his research, some three centuries later...?

So, Kaempfer believed that the bull’s head depicted on the coat of arms is a symbol of the ancient city of Baku itself. Since the land was very dry here and it was often crossed by very strong winds, people living in the city were unable to grow crops and they usually bred cattle. Many scientists believe that the bull and the cow were the most ancient totems of the Absheroni population. These images can be found in rock paintings, in places where people lived and, later, on money. 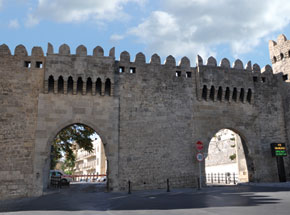 The Double Fortress Gate
Therefore, the image of a bull’s head on the ancient coat of arms is a kind of local symbol.

As for the lions, their depiction on Baku’s coat of arms is probably designed to maintain West Asia’s heraldic traditions and links to oriental culture.

The unique feature of the lions on Baku’s coat of arms is that they have no swords in their hands. However, this does not detract from their grandeur at all. Along with the bull, the Sun and the Moon are also often depicted on ancient city heraldry. The Sun is a symbol of day and the Moon is a symbol of night. It could be that the small circles near the bulls’ heads depicted on the double walls of the Baku fortress bear the same meaning.

So, according to Kaempfer, the meaning of the coat of arms on the main entrance gate to the fortress is as follows: “The lions (meaning the fortress walls) guard the Bull (meaning the city) both at night (the Moon) and in the day (the Sun)”.

These walls represent a living historical thread, linking ancient Baku, old Baku and modern Baku in the present day. Three historical periods and five architectural styles merge in fascinating harmony in Nizami Square, which begins as soon as you pass through the Double Fortress Gate.