Tea-growing in Azerbaijan: The Present and Prospects

In Azerbaijan tea is mainly grown in the Lenkeran-Astara region. This is an area of some 5.33 thousand square km. and includes the districts of Astara, Lenkeran, Masalli, Lerik, Yardimli and Jalilabad. Tea is grown in the first four of these districts. The Lenkeran-Astara region is a humid, subtropical region. About 55% of the region is mountainous, the rest consisting of lowlands and plains. The region borders the Caspian Sea in the east, with Iran to the south, south-west and north-west. The region’s humid climate is due to the Caspian Sea to the east, the humid, subtropical areas of Iran in the south, the Talysh mountains and the coverage of vegetation. The region differs from other regions of the country in the richness, colour and variety of its flora. The Talysh chain of mountains has not undergone icing and has been covered by the unique Hirkan forest for some 70 million years. Unique, ancient species of plants are endemic and widespread here. 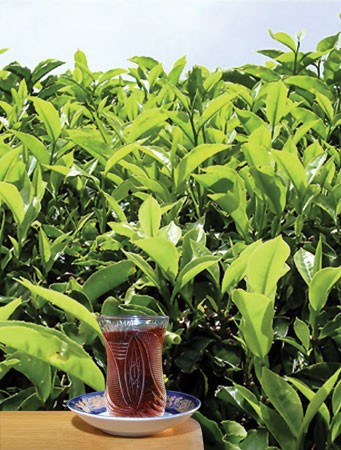 The history of tea in Azerbaijan


The question of growing tea in the humid regions on the coast of Azerbaijan’s Caspian Sea coast was first raised in the 1880s and 1890s; the Lenkeran-Astara region attracted attention and was assessed positively in terms of tea-growing.

M.O.Novoselov, a land owner, was the first practical planter of tea. Novoselov published an article in the journal “Russkiye subtropiki” (“Russian subtropics”) on tea and other subtropical plants in 1912, based on the results of his experiments in Lenkeran. He showed that conditions were right for growing tea in the region.

A scientific study on growing tea on the Caspian Sea coast was initiated in 1929, at the Lenkeran tea branch of the current Azerbaijan Institute of Gardening and Subtropical Plants.


The first Government decree on developing tea production in the Lenkeran-Astara region was issued in 1931 and the establishment of the second tea producing base in the former Soviet Union began during that period. An independent “Azerbaijan chay” (“Azerbaijan tea”) trust was established in 1937 to manage the developing tea industry, particular attention being given to training local tea producing personnel abroad.


The USSR’s Cabinet of Ministers issued a decree “On measures to further develop the tea plant in the Azerbaijan SSR” on 7 May 1949. This decree instructed the rapid development of tea plantations in the Republic and a fundamental increase in the productivity of the tea plant. 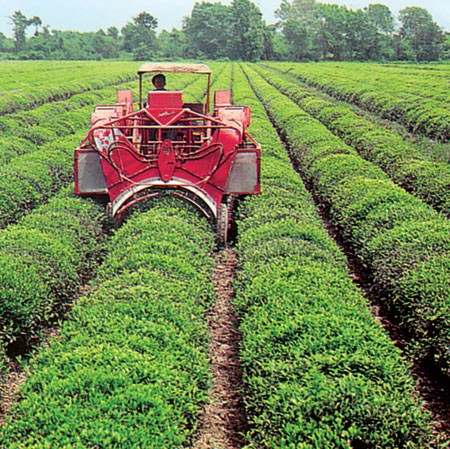 Project institutions developed a programme of improvements which was considered and approved by the Technical-Economic Experts’ Council of the State Plan Committee of the Soviet Union in 1953. This was the first move to plan tea-growing facilities. The draft plan envisaged the drying of 36 thousand hectares of land and building a series of water reservoirs to establish irrigation networks in the Lenkeran-Astara region. As these measures were gradually implemented, the tea plantations were extended and tea leaf collection increased.

During the large-scale expansion of tea growing in Azerbaijan, there were fluctuations in the pace of development. However, it should be specifically mentioned that regular measures were taken from 1970-1980 to extend tea plantation fields, to improve agro-technical services, to establish a material-technical base, in particular, to improve water supplies and, in general, to intensify tea growing. During this period water reservoirs, the construction and operation of irrigation units in Lovain in Astara, in Khanbulanchay in Lenkeran and in Vileshchay of Masalli greatly improved the irrigation of the tea plantations. Besides, much has been done to restore sunken plantations and make more rational use of the land.

All this, including training personnel in tea-growing and improving the tea refining industry has made tea-growing and tea-producing into a profitable area of agriculture. It became possible to increase the overall area of tea plantations to 13.4 thousand ha. and to produce over 34 million tons of tea leaves, out of which 9 thousand tons of quality Azerbaijan tea was produced. At the same time, 14 tea leaf refining factories and 2 tea weighing and packing factories were built, which allowed 45 thousand tons of green tea leaves to be refined annually. The tea leaf industry exceeded 64% efficiency. 65-70% of the country’s demand for dry tea was covered by local tea production. 65-70,000 people were involved in tea-growing and tea refining in the region.

Considering the high economic, social, consumption and ecological importance of tea-growing, the Government of Azerbaijan adopted a decree to improve tea-growing in 1987.

It was intended to expand the area of tea plantation by 7 thousand ha. – up to 21 thousand ha. - improve the tea industry and thus raise the production of green tea leaves to 80-90 thousand tons and the production of dry tea to 20-22 thousand tons by the beginning of 2000. In 2001-2002 it would have been possible fully meet demand for dry tea from the country’s population with the local Azerbaijani black velvety tea. The socio-political events that took place in Azerbaijan from 1988-1994 (the collapse of the Soviet Union, Armenian aggression against Azerbaijan – ed.) had a negative impact on tea production in the country as well as on other areas. On the eve of transferring tea-growing and tea refining to a market economy, there were a number of material-technical and organisational problems. And this had a negative impact on production.

In this situation tea imports increased. However, the development of local tea-growing remained a most important issue.


The revival of tea production in Azerbaijan is a focus for the current programme on food safety.

Observations prove that the Azerbaijani population ranks highest among tea-growing countries for its consumption of the product. About 2-2.5 kg of tea is consumed per capita, which is a large amount of dry tea for a country with a population of 9 million people. Tea holds an important place on the table of the Azerbaijan population as a strategic food. This is why the reputation of Azerbaijani tea should be restored and its applications should be extended. 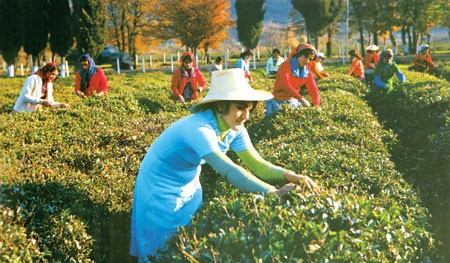 Explorations carried out in the humid, subtropical Caspian Sea region of Lenkeran-Astara in 1980 revealed that more than 20 thousand ha. of land are needed to produce tea profitably. However, even in the good times only 13 thousand ha., or 65% of the amount necessary, was used for tea plantations. In the Zagatala-Balaken region of Azerbaijan, there is suitable soil for tea growing, out of which only 200 ha. was used for that purpose. This indicates the potential resources for tea-growing in the region.

Recent explorations have revealed a very important agro-climate potential for tea plant on the southern hill-sides of the Great Caucasus. These could be considered as a base for further extension of tea plantations in Azerbaijan in the future.

In this plan, special importance should be given to establishing an “Azerchay” working group, to establish the relevant financial foundation by involving foreign investors, providing low-interest loans, increasing the endurance of Azerbaijan tea in the face of competition etc.

About the author: Farman Guliyev is a Doctor of Agricultural Sciences and professor. He is the author of monographs and articles on tea-growing in Azerbaijan, as well as on the subtropical regions of the Caspian Sea coast. He is Chairman of the Co-ordination Board of the Caucasus Tea Confederation. He has made speeches at national and international conferences of experts on tea planting.

For more on the Azerbaijani tea industry, watch this brief video: