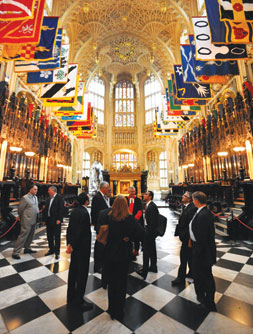 “In Azerbaijan, religious leaders are more like brothers – the word ‘tolerance’ is insufficient. I thank God that I was born in that country”, stated Gennadiy Zelmanovich, Chairman of the Baku Religious Community of European Jews. The comment was made at a meeting at the House of Lords on 18 June, organised by Lord Laird on behalf of The European Azerbaijan Society (TEAS). Speaking before a high-ranking delegation of religious figures from the UK and Azerbaijan, Mr. Zelmanovich went on to reveal that his homeland has a Jewish community of 30,000; this contrasts with neighbouring Armenia, which is virtually a mono-ethnic state.

Held from 17–19 June in London, this landmark event, entitled Interfaith Dialogue, Azerbaijan and Conflict Resolution, was aimed at raising awareness of the religious pluralism in the country. During the opening meeting, Lord Laird referred to his recent TEAS-facilitated trip to Azerbaijan, explaining its position at the crossroads of the world, which has resulted in the wide range of religious faiths practised in the country.

Religion is a coalescing factor

Dr Rev Marcus Braybrooke, President, World Congress of Religions and Co-Founder of the Three Faiths Forum, referred to a recent comment by the Chief Rabbi, Jonathan Sacks, that countries should become “a community of communities” and that “religions have a special role in healing the wounds of conflict.” This stance was reiterated by Yousef Al-Koie of the Khoie Foundation, representing Shi’a Muslims in the UK. 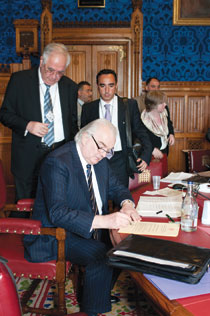 Lord Laird signs the declaration affirming the role of religion in conflict resolution
He was followed by Hidayat Orujov, Azerbaijani Chairman of the State Committee for Works with Religious Associations, who expressed the opinion that: “Religious tolerance should never be compromised. Tolerance has existed in Azerbaijan for centuries – there are people in Azerbaijan from most countries in the world. Christianity entered the country around 2000 years ago, with the establishment of the Caucasian Albanian church. All ethnic and religious groups exist as a friendly family, and Article 48 of the Azerbaijani Constitution relates to freedom of conscience and religion.” In fact, the Advisory Council of the State Committee for Works with Religious Associations includes representatives of all major religions to ensure that balanced decisions are made.

Mr. Orujov contrasted this with Azerbaijan’s neighbour, Armenia, which has attempted to develop a mono-ethnic, mono-religious state, expelling its Azerbaijani population and appropriating Christianity as the state religion. He explained how Armenian leaders have sought to harness a religious justification for the continuing occupation of Nagorno-Karabakh and seven surrounding regions, equating to 20 per cent of Azerbaijani territory. Mr. Orujov also revealed the alarming fact that Armenians have systematically distorted Albanian Christian monuments and buildings in the occupied regions in an attempt to make them appear as if they have Armenian heritage, thereby giving credence to their actions.

The gift of tolerance

His sentiments were reinforced by Salman Musayev, Deputy Head of the Muslim Board for the Caucasus and leader of the Muslims in the Trans-Caucasus, who went on to comment: “God has provided Azerbaijan with the gift of natural resources, but the real gift is religious tolerance. 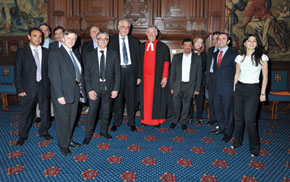 The delegation visits the Westminster Abbey in London
This continues, despite the presence of nearly one million Internally Displaced Persons and refugees in Azerbaijan, due to Armenian aggression. We share the joy and sorrow of our Christian and Jewish brothers. Tolerance can save the world, and in Azerbaijan it is a daily reality.”

The fact of brotherhood is most evident during holidays, commemoration days or in the opening of religious sites. On these occasions, all Azerbaijani religious leaders come together and pray in unity.

Semyon Shalmeyev, Deputy Chairman of the Mountain Jews, continued by explaining how his community had existed for 2,600 years, later being augmented by the European and Georgian Jewish communities. Mr. Zelmanovich explained that, until Azerbaijani independence in 1991, there had been one synagogue in Baku, but state support had resulted in the construction of six synagogues and two Jewish schools. Thereafter, a declaration was signed by all participants, reaffirming the essential role of religion in bringing peoples and nations closer together and in resolving ongoing conflicts.

An exchange of mutual experiences 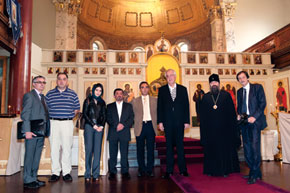 The delegation visits the Russian Orthodox Church in London
The delegation then visited St. Ethelburga’s Centre for Reconciliation and Peace in Bishopsgate, City of London, where they exchanged views in the carpet-strewn Sacred Tent regarding respective attitudes towards religious pluralism in Azerbaijan and the UK. Here, Mr. Musayev revealed that Azerbaijan is home to many marriages between differing ethnic and religious groups, the country being devoid of prejudice; and that churches, mosques and synagogues assist each other financially.

The delegation concluded their day by attending Evensong at Westminster Abbey, before going on a guided tour, and on Saturday visiting the Russian Orthodox Church in London and London Central Mosque. They also held a meeting at the home of renowned philanthropist Sir Sigmund Sternberg OstJ, KCSG, JP, Co-Founder of the Three Faiths Forum; Founder and President of the Sternberg Foundation and Founder of the Sternberg Centre for Judaism.

During the conversation, Sir Sigmund took the opportunity to praise Azerbaijan’s record of religious tolerance. He referred to a meeting in June between Mr. Orujov and Archbishop Gianfranco Ravasi, President of the Pontifical Council for Culture, during which the Archbishop had commented: “We highly appreciate Azerbaijan’s traditions of tolerance, and want the Catholic world to learn more. 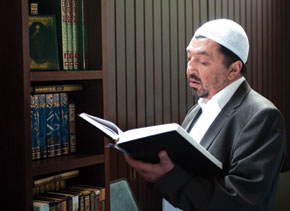 Salman Musayev, Deputy Head of the Muslim Board for the Caucasus, examines literature in the London Central Mosque
The respect and state attention towards religion in the Republic and tolerance towards representatives of other religions should become an example to other countries.”

This was an invaluable visit, revealing the facts about faith in both countries to those in attendance from both the UK and Azerbaijan. The event was tremendously successful, with all sides resolving to continue dialogue. Mr. Orujov explained how moderates should be the leading force in the future of religions across the world, expressing a wish for a similar event to be held next year in a larger format. He stated that the role of interfaith dialogue cannot be underestimated, as it serves to ensure that: “The problems of yesterday are not those of tomorrow.”