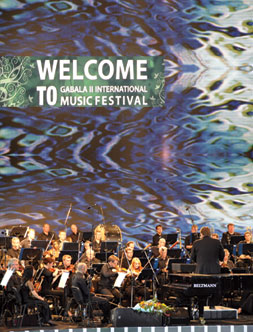 Azerbaijan really does always surprise. After ten years here, perhaps a little complacency sets in and you think, ‘I’ve seen most things’- and then comes the (second) Qabala International Music Festival: five-star hotels, the UK’s Royal Philharmonic Orchestra, the joy of discovering yet more wonderful local musicians – and all backed by the most breathtaking scenery.

The leisurely drive from Baku to the, previously, modest northern town of Qabala is a reminder itself of the variety and interest to be found in this land. The landscape before Shamakha is, basically, desert and then just before the former capital of Shirvan, you climb a hill and all becomes green. As we skirted the south side of the town we decided to stop off to see the Yeddi Gumbaz (seven tombs) – visible from the main road, but somehow always bypassed before. The 200 year-old octagonal tower-tombs of the Shamakha khans are open to the elements; with the leaning, Arabic-script gravestones surrounding the tombs they give an individuality to the site which contrasts with the view of the town across the valley. Continuing west, with the occasional obligatory stop for samovar tea, the landscape becomes ever more green and eventually the fruit sellers appear by the roadside, frantically waving you down to buy. This culminates in the ‘bucket bazaar’ near Vandam, which you really should not pass by – unless you have something against being tempted by the juiciest, ripest fruit of the season.

Arriving at the Qafqaz resort in Qabala just in time for a late lunch, we settled down in one of the sheltered tea-houses in the grounds – with another samovar – and glanced through the festival programme. We decided to take in the evening concert scheduled in one of the hotel’s conference rooms. It was listed simply as a ‘Vocal concert’; the description undersold the event – by a long way. Rachmaninov, Mahler, Mozart, Schumann, Saint-Saens, Rossini, De Falla and Donizetti – a fair selection of music by any classical standard and the young Azerbaijani singers entrusted with it did it more than justice. Especially delightful were the lively operatic duets – our taste is always for interaction – and the revelation for us was Javid Samadov. His first appearance in the evening was to sing an aria from Mozart’s ‘Don Giovanni’ – the baritone voice is deep and rich, but it was the expression and the way he drew the audience into his world which marked this singer as out of the ordinary. His later duets with the spirited Farida Mammadova and Sabina Asadova were the more impressive for their interplay. The third female singer of the evening, Gulnaz Ismayilova also displayed a fine and convincing range of emotions. We left the hall very keen to find out more about such refreshing musicians.

Catching up with Samadov a couple of days later we were astonished to learn that not only was he just 24 years old, but that he had only been singing for 5 years. But you will have to wait for the next edition of ‘Visions’ for the full story.... 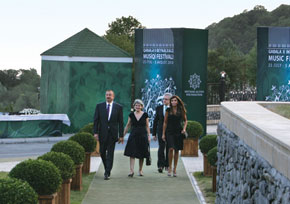 We took it easy the following day, enjoying the splendours of the setting. The mountains surrounding the hotel resort are the foothills of the Great Caucasus and are heavily forested with broad-leaved trees; their lush, velvet verdancy adding to the gentle comfort of the whole environment – especially with an ‘armudu’ (pear-shaped) glass of tea to hand. We were gearing up for the evening’s gala concert, the first appearance by the Royal Philharmonic Orchestra.

This concert was in the open air, with a specially-constructed stage and arena – to take full advantage of the perfect climate and surroundings – and Beltmann piano, now locally produced, proudly to the fore. It was also special because it was opened by Irina Bokova, Director General of UNESCO, in the presence of President Ilham Aliyev and Mehriban Aliyeva, President of the Heydar Aliyev Foundation, which initiated the festival. Ms. Bokova took the opportunity to present Mehriban Aliyeva with UNESCO’s Mozart Gold Medal for her contribution to the promotion of culture.

The concert was given a rousing start with Azerbaijani conductor Rauf Abdullayev taking the RPO through the overture to Uzeyir Hajibeyov’s opera ‘Koroglu’. The programme that followed surely had something for everyone’s mood. The romance of Bruch, played by Yuri Bashmet – with Dmitry Yablonsky conducting – was followed by Bashmet taking up the baton for a spirited drive through Mozart’s 40th Symphony. For some the musical highlight was provided by the sweep and depth of Yablonsky’s cello playing Tchaikovsky’s Nocturne for cello and orchestra.

Again the cellist took over the podium to conduct a complete change of mood and tone with Mexican tenor Emilio Pons introducing the Latin romance and rhythm of ‘Granada’ and tango. The UK’s Chloe Hanslip played Saint-Saens’ Rondo and Capriccioso in lively style and then festival directors Yablonsky and Farhad Badalbeyli combined to beautiful effect on the latter’s own atmospheric composition for piano and orchestra, ‘The Sea’. Tofiq Guliyev’s fun dance piece, ‘Qaytagi’ took us to an emotional and patriotic finale of Muslum Magomayev’s ‘Azerbaijan’ – the great Soviet-era opera and popular singer would surely have been happy with rising star Javid Samadov’s tribute to both country and baritone predecessor.

The gala concert over, it was time to take the shuttle bus to the newly-opened Riverside hotel, for a poolside reception. The grandeur of the Riverside made us wonder if we were dreaming and had been transported somewhere to the far west, but it felt solid enough. As local jazz stalwarts kept the rhythm going, we managed to have words with members of the 80-strong RPO contingent who do not usually sit on the front row. Percussionists John McCutcheon, Richard Horne and Kevin Earley were still trying to take it all in, having been in the country barely a day and already played a varied programme. 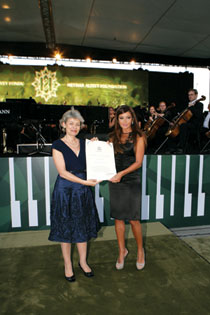 Irina Bokova presents Mehriban Aliyeva with UNESCO’s Mozart Gold Medal
They were certainly pleased by first impressions and were looking forward to a 10-day stay which would give them more time to settle, look around and experience more than on the more usual one or two night stands.

An ear to the future

The RPO’s longer stay also benefitted the next generation of local musicians. The Orchestra’s ‘Resound’ project collaborated with the British Council to organise four days of creative workshops for children from the Mardakan Orphanage Brass Band and from Qabala. The enthusiasm of the 30 youngsters made short work of any language problems. Tim Steiner’s approach, to communicate through the music (and dance!), paid off as the band drew enthusiastic applause with their final performance to the festival audience. This is also too good a story not to be followed up in a future issue....

The youngsters in the brass band had also previously enjoyed a workshop with the U.S. Navy Five Star Brass Ensemble and they were not the only ones enthusing about these opportunities provided by the festival. Al Jarreau had been scheduled to appear but was unfortunately struck down by illness shortly before the event. He was replaced by group of Cuban musicians and they were much to the taste of the Azerbaijani jazzmen we spoke to. But first of all they sounded off about the setting:

Veteran percussionist Tofiq Jabbarov was bubbling over about the Cubans,

“They were a very good salsa band, and then to get together and get acquainted.... it’s always good to meet other musicians.”

Bass player Ruslan Huseynov, Baku-based himself, liked the idea of having the festival in Qabala.

“It’s a good idea to have it here, to get more people to hear music, whether it’s classical or jazz, it raises the intellectual level everywhere. It’s good for local people to see the musicians and for the musicians to see all of Azerbaijan..... it’s good to combine different genres in these festivals. I hope there is more in the future.”

They noted that the Cubans had videoed the Azerbaijani jazzmen playing, intending to study later. There is always something to learn! Then off they went – pianist Elchin Shirinov and Ruslan to work on a possible new project for the Jazz Festival coming up in Baku in October – inspired, no doubt, by the spirit of Qabala.

On the Saturday we took in more of the air, had that talk with Javid Samadov that you’ll have to wait for, looked longingly at the Azerbaijani silk carpets on offer in one of the hotels, checked off the celebrities we’d noted - mostly musical and political, but not excluding the odd footballer (the local team now being coached by one T. Adams) - and sipped more of the tea. The evening brought Dmitry Yablonsky and Farhad Badalbeyli back to the stage with the French Ysaye Quartet for a concert of chamber music in the conference hall. Brahms’ Piano Quintet and Schubert’s Cello Quintet satisfied a relaxed audience and allowed the Orchestra a bit of time to explore.

We had to leave on the Sunday, missing out on performances by renowned pianists Oksana Yablonskaya and Boris Berezovsky, and the Mardakan Brass Band. 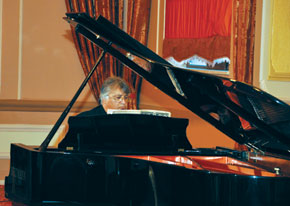 Farhad Badalbeyli plays Brahms
There was just time for a few lengths in the swimming pool – as the temperature was up in the 30s, we went for the indoor one, sharing it only with a world-famous cellist on a well-deserved cool-down.

On the way back we stopped off first, of course, at the bucket bazaar for the juiciest of plums and peaches. Next to it is the ‘Girve’ restaurant. We sipped tea there and looked out over a now gorgeous valley which was once, apparently, regarded by a certain Tamerlane as his troops notched up another victory on their remorseless march westward.
We preferred to reflect on a closer moment in history and the heroic efforts made to bring it about. Thank you to the Royal Philharmonic Orchestra, Farhad Badalbeyli, Dmitry Yablonski and all those others who strove to produce the magic of the 2nd Qabala International Music Festival – and we look forward to the third....