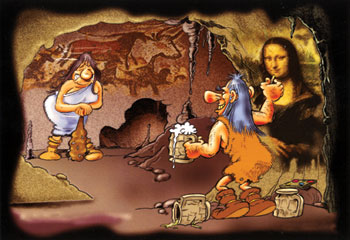 After tantalising you with a ‘snapshot’ in our last edition about the “Molla Nasreddin – Azerbaijan 2010” International Cartoon Competition, we just had to go to the Azerbaijan Cartoonists’ Union to bring you more. Who better than Honoured Art Worker Bayram Hajizadeh, President of the Union and leader of the competition project, to give us the background?

“There have been international cartoon exhibitions in different parts of the world for 40 years, but cartoons in Azerbaijan have a history going back more than 100 years and I wanted to show this to the world.”

The first competition was organised in 2008 and dedicated to the satirical magazine ‘Molla Nasreddin’, which was first published just over 100 years before – in 1906 – and which lambasted human foibles through Tsarist, Democratic and Revolutionary regimes until 1931. ‘Molla Nasreddin’ was another of Azerbaijan’s many artistic firsts, says Hajizadeh – the first satirical magazine to be produced in the eastern world.

Last year’s competition coincided with the 15th anniversary of the ‘Contract of the Century’ – the agreement made between independent Azerbaijan and international companies to develop the country’s principal natural resource – thus the theme was “Oil”. 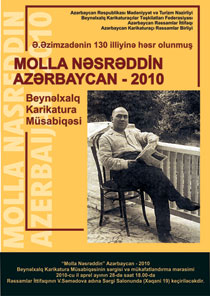 Poster for 3rd International Cartoon Contest "Molla Nasreddin - Azerbaijan 2010”
The dedication this year was to the 130th anniversary of Azim Azimzadeh – the artist, satirist, illustrator and theatre designer who was also artistic director of ‘Molla Nasreddin’. The theme was “Artist” in tribute to Azimzadeh’s versatility. If interest in the competition is a measure of the awareness raised in Azerbaijan and its culture then it has to go down as a success: 620 cartoons were submitted by 331 cartoonists from 59 different countries. A broad selection displayed in the Union of Artists’ building attracted interest and were finally whittled down to 13 prize-winners by an international jury of 9.

Gold medal winner was Alexei Kustovski, from Ukraine, depicting the literal flowering of art by an organic Renaissance-type painter. Turkey’s Ahmet Aykanat’s wry comment has an artist’s somewhat precarious material support balanced by divine protection of his courage and invention. Fellow silver medallist Mikhail Zlatovsky (Russia) has a more sombre message, with a landscape of trees and clouds triggering a vision of the infamous ‘mushroom’ cloud in the artist. Of the bronze medallists, Montenegrin Darko Drljevic’s cheeky thieves of Stone Age art struck a light-hearted chord.

Challenging in the past

The competition’s focus on the groundbreaking ‘Molla Nasreddin’ is fully justified as the magazine attracted many of Azerbaijan’s best writers as well as artists - we will return to it in greater detail in future issues. Arising as it did from a period of great social change – the revolution of 1905 - it set a standard and established a great tradition; by the time of the Bolshevik revolution, there were 25 satirical magazines being produced in the country. It is a tradition which survived even the darkest days of Stalinism. 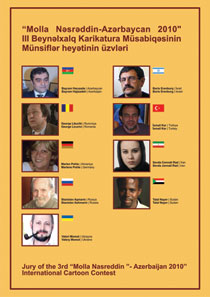 Poster with pictures of contest jury
Indeed, Bayram Hajizade believes that the Soviet era witnessed a flourishing of the art and, perhaps surprisingly to western readers, he sees the 1950s and 60s as the ‘golden age’ of the modern era:

“Cartoons were a branch of state ideology and there was plenty of state support for cartoonists.”

There was a broad scope for the satirical element, fun could be made of almost anything, it was not restricted only to those who were out of line with state ideology: incompetent or corrupt managers, idle workers and external opponents. Only the government was off-limits. Hajizade laughs and recalls a Soviet-era joke.

“A guy from the USSR met up with one from the USA and they compared notes about the levels of democracy in their countries. The American was very proud, saying, ‘We have complete freedom; I can criticise my President as much as I want.’ This, however, failed to impress the Soviet guy, ‘We have exactly the same freedom. I can also criticise your President as much as I want.’”

Time marches on, technology develops and tastes change and it has to be said that the satirical magazine is much more of a rarity in the world than it used to be before competition from TV, videos, the internet etc., but Bayram muellim remains optimistic and is buoyed by the success and international interest in the competition. 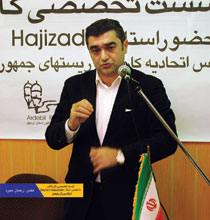 Bayram Hajizadeh, founder and jury member of the 3rd International Cartoon Contest "Molla Nasreddin - Azerbaijan 2010” and chairman of the Union of Cartoonists of Azerbaijan
He was happy, too, that the “Molla Nasreddin Cartoon Contest 2010” received the Federation of Cartoonists’ Organisations’ 5 star award – unusual for a competition without a major prize and a tribute to its organisation.

Perhaps your image of a cartoonist is that of a casual artist, who sits around not doing very much, doodling with ideas until something funny strikes a chord, well a visit to Bayram Hajizadeh’s ‘HQ’ as President of the Azerbaijani Cartoonists’ Union would change that perception. It is clear that producing laughs via cartoons is a serious business indeed. Heading down to an unprepossessing ground-floor flat one is unprepared for the cultural wealth and stimulation within. Books, paintings, and cartoons line the walls, sculptures and artefacts add to the interest in a cosy and comfortable, classically organised office – you can hardly keep your eye from roving across Sattar Bahlulzade’s impressionistic paintings to century-old satires, to the magazines and books spread on the tables and desks. Bayram muellim himself has produced 7 academically entertaining books on his speciality: he is a PhD and lecturer in the history of the cartoon at the State University of Culture and Art.

He has been President of the Cartoonists’ Union since 2006 and obviously revels in the opportunities that his position presents to study, produce and promote the love of his creative life, but one feels that perhaps the formal aspects of the post are now taking up too much time and that research and teaching are becoming greater priorities for him. 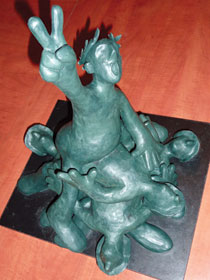 ‘Sculpture Cartoon’ by Bayram Hajizadeh, Azerbaijan
He is certainly not giving up the challenges of the modern era and is experimenting with new forms of the cartoon.

“Cartoons don’t have to be graphic in form, they can be depicted in any form of art.”

Sensing that this was not a casual comment, we asked for an example and got the answer that he was working on a sculpture, but there was so far only a clay model. We were, however, allowed a peek before the model was taken for casting and here we present a preview of Bayram muellim’s latest ‘3-D cartoon’. In this case it represents Azerbaijan’s victory over its many tribulations during and since the struggle for independence.

For more on the seriously funny side of life track the Azerbaijan Cartoonists’ Union’s website http://www.azercartoon.com - true to its internationalist spirit there are also plenty of links to help broaden the sense of humour.

39540
LiteratureAutumn 2018
Ali and Nino: Love at the Crossroads
by Kate O'Donnell