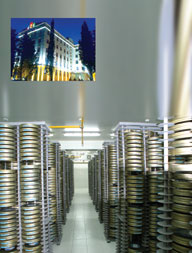 Cinema is still given junior status by certain culture vultures, perhaps because of its relatively short period of development. For countries like Azerbaijan, however, which have seen such dramatic social and political changes over this time, cinema is a special source of pride and a reflection of their path towards independent maturity. Like literature, but unlike others kinds of art, including the theatre, the art of cinema can be preserved intact for future generations and the Azerbaijani State Film Foundation is a unique cinema archive. It holds thousands of films, both domestic and foreign.

A special organization – the pan-USSR State Film Foundation (“Gosfilmofond”) was established in the former USSR in 1948, based on the collection held by the main film distribution department. The Foundation’s purpose was to collect films, preserve them and process them. Cinema organizations throughout the Soviet Union were compelled to hand over the materials they held - even fragments of films - to the foundation.

In 1974, over 40,000 films were held at the USSR Film Foundation: foreign as well as Soviet. These ‘films’ included negative film, interim positive film, positive images and films with audio tracks. In total they amounted to over a million pieces of film. These materials included hundreds of movies shot in Azerbaijan since the 1920s. “Gosfilmofond” became the property of the Russian state after the collapse of the USSR. The organization is now called the Russian State Film Foundation.

This kind of cinema organization was badly needed in Azerbaijan, too. Until then movies had been kept in poor conditions at the Jafar Jabbarli “Azarbaycanfilm” film studio and the Republican Film Distribution Department or distributed around the regions and villages. Thus the Azerbaijani State Film Foundation was established by decree of the Cabinet of Ministers on 22 December 1993.

The Foundation commenced operations in the building of the former “Galaba” cinema in 1994. However the building was not suitable and soon new premises were built and equipped to modern standards by decree of Azerbaijani President Ilham Aliyev. This was in the grounds of the Jafar Jabbarli “Azarbaycanfilm” film studio and the Foundation has operated there since 2009. 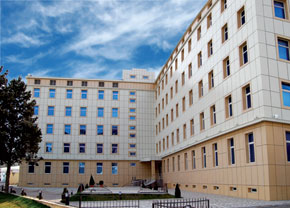 The projection and sound equipment is state-of-the-art and films of many different kinds are stored in special containers. We should mention that all movies made between the 1920s and 1950s were recorded on combustible nitrate film. These films (there are about 1,000) produce a clear picture, however, they are dangerously explosive; working with them requires high professionalism.

The Foundation was elected to membership of the International Federation of Film Archives (FIAF) in 1999 and operates in line with international standards, following FIAF’s recommendations. To this end, the Foundation is in regular contact with the Federation’s headquarters in Brussels from which it obtains information about the publication of various kinds of cinema literature, the organization of cinema archive work and innovations in the development of this work.

The Foundation holds its films in 64,372 storage units; there are about 20,000 photographs, 12,000 original documents, exhibits and materials (literary scripts and directors’ film scripts, editing lists, diplomas, awards etc) – many assembled from private collections. All archive materials and photographs are stored in special closed shelves to protect them from dust and humidity.

There are special storage cupboards for film posters, advertising materials, and newspapers and magazines published in various years. Exhibits, costumes and props related to films are also stored.

The films are also researched scientifically, thus the discovery of the first chronicle footage (“Fire at an Oil Fountain in Bibiheybat” and “Oil Fountain in Balaxani” 1898), copies of which were brought from French cinema archives. They were filmed 112 years ago and are the foundation of our domestic cinema. A special “Cinema bulletin” is issued about the films held at the Foundation and books are published. These books and bulletin are distributed via FIAF. In this way, the Foundation also learns about new processes for preserving films. It can even implement independent innovations. 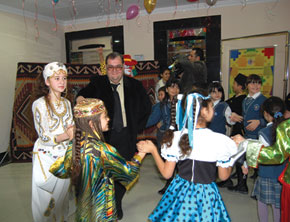 At the Children’s Cinema, established by the State Film Foundation. Foundation Director Jamil Guliyev surrounded by children
One of the main activities of the Foundation is the promotion of the art of cinema. This involves promoting not only our own cinema but foreign films, too. Following the development of an action plan, showings and anniversaries of a number of prominent Azerbaijani cinema figures are held during the year. Employees of the Foundation also promote cinema on the various TV channels.

Information about the history of Azerbaijani cinema is produced. One example is a catalogue of films published in Azerbaijani, Russian and English - an electronic version is also in preparation. The catalogue will introduce our films to many other countries. Foundation specialists visit other countries’ Film Foundations in their search for information about our domestic cinema.

A delegation led by Foundation Director, Honoured Artist and film director Jamil Guliyev, recently visited Georgia. As a result, copies of rare and valuable archive documents from Georgia’s National Foundation were brought to Azerbaijan. These documents include copies of pictures taken by Russian photographer Dmitriy Yermakov from 1854-80 in Baku, Shemakha, Ganja, Sheki, Lenkeran and Nakhchivan, footage of the funeral of the Baku commissars, filmed by Georgian cameramen in 1920, and newsreels of sessions of the Azerbaijani Central Executive Committee in 1928. Photographs were also taken of the house in Tbilisi where Azerbaijan’s first professional film director, Samad Mardanov, lived.

Rare films from the history of our cinema have entered the Foundation in the last few years. A film about composer Muslum Magomayev, which was once believed lost, was found in a private collection and handed over to the archive. In this documentary, the famous opera singer Shovkat Mammadova and prominent conductor and composer Niyazi share their recollections.

Since the conditions in which films are stored at the State Film Foundation are now satisfactory, many film directors have presented their private archives to the agency.

Other interesting acquisitions include archive documents of our first movie actress Izzat Orucova – from the USA, and documents related to the filming of the movie “Sevil” (1929) (more about this groundbreaking film in our next issue – ed). Several rare silent Azerbaijani films, which were once considered lost, have been re-discovered. Among these films was “Dacal dasta” (1937, one of the directors was Azerbaijan’s Gamar Salamzade, the first female director in the East). 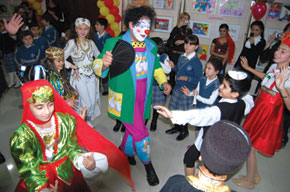 At the Children’s Cinema, established by the State Film Foundation
At the end of 2009, a Children’s Cinema House was opened at the Azerbaijani State Film Foundation for the first time in our country, with the support of the Heydar Aliyev Foundation. The purpose is to instil a love for cinema in young children. A number of events have been held for young audiences; motion pictures and cartoons have also been screened.