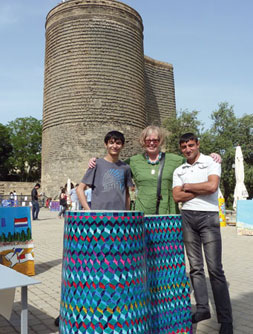 The innovative Maiden Tower International Art Festival brought 20 artists from 18 different countries to Baku’s historical focal point, the mysterious Qiz Qalasi – Maiden Tower – at the end of May. Their task? – to paint models of the monument using motifs from their own cultures, thus creating a synthesis of traditions.

When they said paint, the organizers did not mean anything so simple as sitting down with a blank piece of paper – oh no! – on 26 May the artists were presented with a metre-high model of the landmark and asked to decorate it, in the open, under the sun, among the crowds and facing the tower. The next four days were a blur of colour, sweat and cheers in the Old City (Icheri Sheher) as talented painters from Russia, the Netherlands, Israel, Norway and the USA, as well as Azerbaijan, of course, and other countries, coped with the conditions and the helpful advice, comments and tea from onlookers.

Roxane Permar – an American now based in the Shetland Isles, well north of Scotland, was happy with the conditions, the challenge and, particularly, the help she received from local enthusiasts Orkhan and Anar. She was only too pleased to invite her ‘collaborators’ to pose for a picture celebrating a design well done. 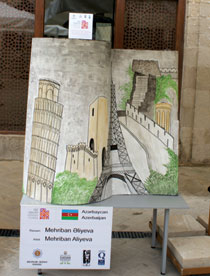 The festival was organized by the Heydar Aliyev Foundation, the Icheri Sheher State Historical and Architectural Reserve, the Museum of Modern Art and the Maiden Tower Art Gallery to promote the image of Maiden Tower.