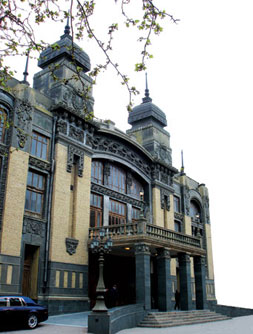 The Azerbaijan State Theatre of Opera and Ballet
Pages 74-79

Baku is a large and thriving industrial and cultural centre and is a city of many museums and architectural gems. It´s busy, vibrant and hospitable. The theatre is a particularly important part of life here; it has a long history - the first opera in the East was performed here - and one of the city´s most famous venues for a glamorous evening´s entertainment is the Azerbaijan State Theatre of Opera and Ballet.

This magnificent building was begun 100 years ago, in 1910, by Nikolai Bayev, completed in under 10 months - it opened on 28 February 1911- and it´s still stunning today. Inside, the elegant baroque and rococo features, ornate gilding, mirrors and crystal chandeliers, together with comfortable soft velvet seating, create an unforgettable ambience for unmissable performances.

There is a fascinating choice of operas and ballets in the repertoire, featuring performers of a high international standard, and no matter what you come to see you won´t be disappointed. So if you´re just in Baku for a short while, check out what´s on and give it a go, even if the name of the opera or ballet is unfamiliar – many are based on local legends or the stories of Azerbaijan’s legendary poets. If you´re in Baku for a little longer then you´ll be lucky enough to be able to experience the diverse range of performances but, most importantly, you have the opportunity to get to know and love some of the Azerbaijani operas and ballets which are so popular with discerning local culture vultures.

Performances to look out for include (Azerbaijani names in brackets):

The first and most famous Azerbaijani opera, written in 1908 by Uzeyir Hajibeyov, based on the famous Fuzuli poem of the same name. The classical story is said by many to have been the inspiration for Shakespeare´s Romeo and Juliet. Hajibeyov incorporated the traditional Azerbaijani mugham music (which allows the singers to improvise) 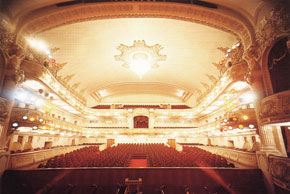 General view of hall of the theatre
as well as the more usual operatic elements.

Koroglu – Son of a Blind Man (Koroglu)
Premiered in 1937, this is regarded as Uzeyir Hajibeyov´s greatest opera. Encompassing many aspects of national traditions, it is based on a legendary ‘Robin Hood’ type defender of the people. This opera is hugely popular with Azerbaijanis, but it has also travelled to Moscow to great acclaim.

Shah Ismail (Sah Ismayil)
Muslim Magomayev, who wrote this opera, first produced it in 1918 when it was a great success. But he rewrote it several times and then it was re-written again by Gara Garayev and staged in 1987, although Magomayev´s version returned later. The theme, a historical legend, includes both classical elements and improvisation, resulting in a theatrical work of art.

Ashug Garib (Asig Qarib)
This is another mugham-style opera which was written in 1916 by Zulfugar Hajibeyov and employs a classical theme of love.

Vagif (Vaqif)
Vagif is a play by Samed Vurgun which in 1960 was turned into an expressive and lyrical opera by R. Mustafayev, a popular Azerbaijani composer who incorporated traditional music.

The Bridal Rock (Gelin qayasi)
Shown from time to time, this features traditional stories of struggles of love and faithfulness set amongst the tyranny of rulers. First performed in 1974, it was written by Shafiga Akhundova, one of the first female composers in Azerbaijan.

Aida (Aida)
Verdi´s dramatic Aida was first shown here in 1965, although was not shown again until 1993. 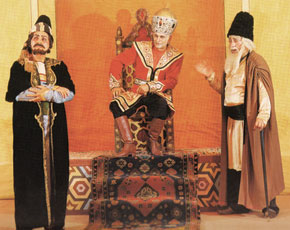 The Barber of Seville (Sevilya berberi)
Rossini´s joyful opera has been shown here since 1964.

Tosca (Toska)
Puccini´s Tosca is one of the most frequently performed classical operas in the world, and it´s popular here too. It was first staged here in 1967.

Don Quixote (Don Kixot)
Ludwig Minkus wrote this popular classical ballet, which is based on Cervantes’ famous story and was first performed here in 1945 and again in 1973.

The Maiden Tower (Qiz Qalasi)
Azerbaijani Afrasiyab Badalbeyli wrote this ballet and first produced it here in 1940. This was the first Azerbaijani ballet. Since then it has remained popular in Baku and has also been performed internationally. The story is based on an old Eastern legend about Baku’s most famous landmark.

Seven Beauties (Yeddi Gozel)
Gara Garayev created this ballet in 1947/48 to mark the 800th anniversary of the Azerbaijani poet Nizami; it was premiered here in 1952. A new version was created in 1978 to celebrate Garayev’s 60th birthday. Azerbaijanis are very proud of this ballet, which tells Nizami´s story of king Bahram-Gur and includes philosophical ideas about the morals and ethics of heroism and love, all skilfully told in music and Love Legend (Mahebbet efsanesi)
Arif Melikov, an Azerbaijani composer, wrote this and it was first shown in 1962. Based on an old legend and set to eastern style music, this beautiful ballet is considered a masterpiece.

Babek (Babek)
Babek was an ancient national hero who symbolises the struggle for freedom, and who inspired Agshin Alizadeh to write this ballet which was first shown in 1986.

Giselle (Jizel)
This beautifully graceful ballet by Adolphe Adam was first shown here back in 1961 and it remains eternally popular with lovers of dance.

Shadows of Gobustan (Qobustan kolgelari)
1969 saw the first showing of this ballet, written by Faraj Garayev in only 40 days. It was inspired by the ancient cave paintings at Gobustan just south of Baku, which are also reflected in the stage design. This ballet was performed in Paris in 1969, at an International Dance Festival. 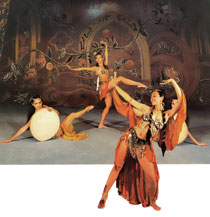 1001 Nights (1001 gece)
The Nutcracker (Selkuncik)
Definitely needing no introduction, this favourite by Tchaikovsky was first performed in Baku in 1940. A new version was choreographed in 1985.

As with many theatres the world over, the Opera and Ballet Theatre is closed over the hot summer months, but mid-September will see the start of a new season. As we write, the theatre is due to undergo refurbishment, so it is best to check with the box office, next to the theatre on Nizami Street (tel. 493-31-88). We hope that the centenary season will bring something even more special to its Baku audience!