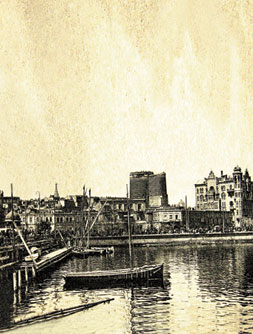 Baku was conquered by the Russian Empire in 1806 but was not granted a coat of arms until after 1840, when the tsar issued a decree on the “Institution of Administration for the Transcaucasian region”. Once incorporated into the structure of Russian government, the region had to acquire the attributes of imperial heraldry.

The upper half contained part of the regional coat of arms on a gold background: on the left a “standing tiger”, on the right “jets of burning gas, bursting from the ground”. 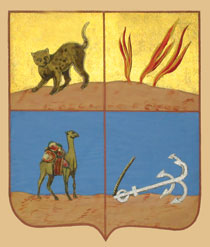 Baku coat of arms. 1843
The lower part had a blue background: on the left an “endorse (centre line- ed.) and camel bearing saffron stems with flowers to symbolize the important businesses of transport and saffron cultivation”; on the right was a “cast anchor, signifying Baku’s role as a port”. From Winkler’s terminology we conclude that the 1843 Baku coat of arms was not directly representative of the city. Depicting the whole or part of the governorate coat of arms was obligatory in districts of the Russian Empire, and this is true of Baku’s coat of arms. The figures used: camel, tiger and saffron, are non-heraldic, i.e. they are taken from real life.

Changes to Baku’s status – it became the centre of a governorate of the same name in 1859 and was allowed a municipal government in 1870, which functioned from 1878 – resulted in changes to the city’s emblems. On 16 March 1883, a new coat of arms for Baku city received imperial approval. Three years earlier, the King of Arms of the Department of Heraldry of the Senate had written that this had already been prepared; he even described the arms, but not until 30 June 1883 could he write about sending a copy to the head of the city. This 1883 coat of arms was a black shield with three golden flames, topped by a golden crown with a turret of three castellations and flanked by two golden spikes, connected by Alexander’s ribbon (picture 2). 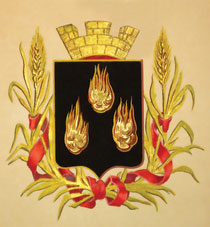 Baku coat of arms. 1883
A coat of arms for the Baku governorate had previously been approved on 5 July 1878 (picture 3).

This coat of arms also comprised a black shield with three golden flames; however, as a governorate’s emblem, it was topped by the imperial crown and surrounded by golden oak leaves, connected by Alexander’s ribbon.

On the 1883 Baku coat of arms the central figure, three golden flames, represents the natural wealth (oil and gas) of the Absheron peninsula. Their placement on the shield (one at the top, two below) is incorrect in heraldry, as three figures on a shield, according to Winkler, should be arranged with two above and one below. A golden tower crown would top shields on the coats of arms of governorate cities, and tower and city crowns were based on a city’s walls, with their castellations and turrets. The adornment around the shield was the Alexander’s medal scarlet ribbon, which traditionally connects spikes, vines, anchors, hammers, picks and banners. On Baku’s coat of arms it connected golden spikes, which were used on the coats of arms of cities associated with crop farming or the grain trade. 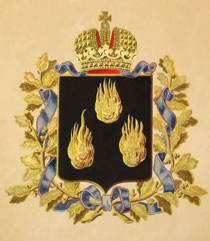 Baku Governorate coat of arms. 1878
The 1883 coat of arms was also not directly representative and its figures non-heraldic.

Baku’s coats of arms during this period certainly helped in forming an image for the city and the changes in the city’s heraldry underlined its growing significance within the Russian Empire.

About the author: Fuad A. Tagiyev is a scientific scholar at the Institute of History at the National Academy of Sciences of Azerbaijan with a PhD in history. He is the author of numerous monographs and articles on the history of Baku at the turn of the 19th and 20th centuries.