Stone-bound tales of a sunken city 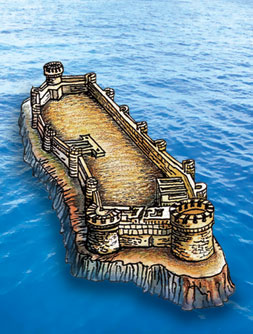 “The towers that can still be seen in the sea before the city of Baku, the walls, gravestones and descriptions written by historians about the former condition of this city show that what was urban 400 or 500 years ago is now submarine. Presumably, these places will surface again sometime in the future.”

There is an island at a picturesque site in Baku, on the coast of the Caspian Sea.

On this island, which is close to the Bayil district of Baku, there is a structure, built long ago, called “Bayil castle” after the name of the surrounding area. During a major earthquake that rocked Baku in 1306, the building collapsed the island submerged and remained under water for several centuries. It was only in the early 18th century, when the Caspian Sea retreated, that the island resurfaced.

The mystery of Bayil castle has intrigued the scientists, travellers, researchers and archaeologists who have visited Baku over the centuries.

Research scientists have referred to it as “Sabayil castle”, “Bayil castle”, “Bandargala”, “Underground town”, “Caravanserai”, “Cloister”, “Monastery”, “Custom house”, “Defence castle” etc, and put forward scientific conjectures and theories about the castle’s purpose, its historical role and the causes of its demise.

It was impossible to express a definite scientific opinion about the building that emerged from below the surface about 250 years ago. 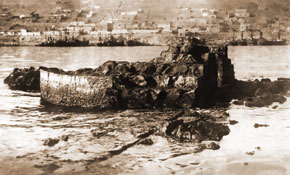 The remains of Sabail fortress. 1930
Who had this strangely designed building belonged to? Whose destiny was tied to it? Scientists were confronted by many a puzzle.

The building complex, which is 40 metres long and 180 metres wide, consists of 15 semi-circular castles, 16 to 28 metres apart and connected by a wall. One of the castles at the four corners – the northern one – stood alone, but the others were connected via small cells. The wall was between 1.2 and 1.5 metres thick. On the wall there were individual stone panels with frieze inscriptions (70 cm long, 25-50 cm wide and 12-15 cm thick).

From 1939-69, an archaeological expedition organized by the Institute of History of the Azerbaijani Academy of Sciences, led by Prof Y. Pakhomov and archaeologists I. Jafarzade and O. Isimzade, discovered relics and, at different times, 699 inscribed stone panels. The stones are currently kept in the courtyard of the Sirvanshahs’ palace in the Old Town. They are decorated with frieze inscriptions in Arabic and Persian, chain-shaped ornamentation and images of people, animals, birds and mythical animals. It is clear from the images on these panels that the craftsmen who made them were highly cultured and capable of subtle observation. 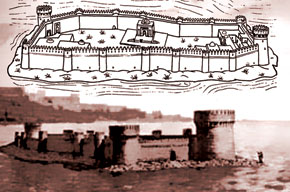 Bayil castle. Graphic illustration. Jafar Qiyasi
These artworks are valuable in the study of the culture of the Shirvanshah period. However, time and the elements have affected many of them. Up to 30 per cent of the stones recovered from the sea had been damaged by the centuries-long work of the waves and their inscriptions and images had been effaced. And not all of the stones have been recovered.

The veteran archaeologist I. Jafarzade and Prof Y. Pakhomov conducted research on the stones over a long period. Jafarzade deciphered the name of craftsman Zeynaddin Aburasid oglu, while Prof Y. Pakhomov found the Hijri date 630-632 (1234AD – ed.), the names of Shirvanshahs like Mahammad, Yezid, Fariburz and Garsasb, the names of the cities of Baku and Shemakha, and the titles Sultan and Shah. A. V. Salamzade believes that Bayil castle belonged to the Shirvanshahs. In 1965, a special laboratory was set up to clean and read the stones’ inscriptions at the Sirvanshahs’ palace complex – a state historical architectural reserve-cum-museum. The stones’ stories support Salamzade’s theory.

The inscriptions on the stones provided, for the first time, interesting information about 9th-14th century Shirvan and the history of the Shirvanshahs, the prominent personalities of the time, the dynasty of craftsmen such as Zeynaddin bin Aburasid and Aburasid bin Zeynaddin who were involved in the construction of the castle etc. The inscriptions also specify the date of construction. 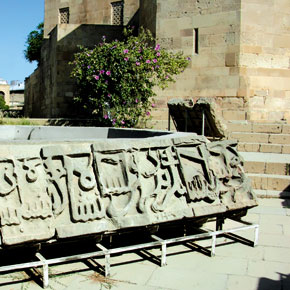 Bayil stones, displayed in the Shirvanshahs’ Palace in the Old City
On the basis of the inscriptions studied, it was established that the castle was built on one of the Bayil hills near the Caspian Sea coast from 1232-1233, during the life of Shirvanshah Garsasb’s son Fariburz.

A fragment of an inscription was found among the friezes which helped to establish the name of the architect of “Bayil castle”, Abdul-Majid Masud oglu. At the same time, i.e. in 1232, this architect also built the round castle in Mardakan, which was part of Abseron’s integrated defence system, defending the city and Bayil castle from the north.

The design of the stones used in the construction of the castle confirms the high level of architecture in Azerbaijan. The names of the Shirvanshahs are inscribed sequentially on the stones and above each ruler’s name are symmetrical images of their symbols: people, animals, birds and mythical images.

Among the inscribed stones, we come across Georgian inscriptions and the image of a Georgian woman. This is no accident. The Georgian and Shirvan ruling dynasties were related at the time.

The images on the stones are integral and organic parts of the design. The realistic images in their different forms may have represented years. The most interesting of the animal images is the full-face image of a bull’s head. The same image is found above the eastern gate of Baku’s Old City wall and also on a stone found near Maiden Tower. This image of a bull, found in three different places, symbolises the Azerbaijani people’s strength and valour and their heroic fight against foreign invaders.

Individual fragments of some of the animal images show that there were life-size bas-reliefs of horses and lions. A relief with a full-face image of a person’s head and Fariburz’s name on its surface is also interesting. This is a bas-relief of the shah who ruled when the castle was being built.

Along with the inscribed stones, unglazed earthenware and household items dating from the 13th century and copper coins inscribed with the 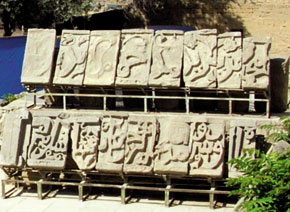 Bayil stones, displayed in the Shirvanshahs’ Palace in the Old City
names of the Sirvanshahs Fariburz bin Garsasb and Xassif An-Nasir (1180-1225) were found inside the castle.

The Bayil stones are a valuable source of information about the Azerbaijani people’s past and their highly developed art and culture. Future study of the inscriptions on the stones will help us not only to solve the mystery of Bayil castle but will also make it possible to shed more light on the history of Baku.

What’s in a name?

The name Sabayil itself gives rise to certain speculation. There are many legends about the people of a land called Saba and a verse of the Koran is dedicated to its story. The people there worshipped the sun; for their disobedience to God, their land was inundated by a flood. Could there be a connection?