Stalin on the territorial integrity of the Azerbaijani SSR 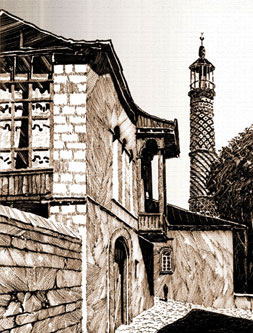 Armenian claims to Azerbaijani lands in Karabakh, Zengezur and Nakhchivan did not cease after the Russian 11th Red Army occupied Northern Azerbaijan in April 1920. Soviet Russia, which was nurturing plans to annex the entire South Caucasus, came forward as a mediator in the resolution of this conflict.

From 1917-22, Stalin headed the Commissariat for Ethnicities of the RSFSR. He was one of the political leaders of Soviet Russia actively involved in this process[1].

As a political figure with an imperial mindset, Stalin understood very well that the country, torn by civil war and economic depression, needed interethnic calm and stability. Political efficacy was always paramount for Stalin in resolving interethnic conflicts. Archive documents show that in the period 1920-21, telegrams and reports to the Centre on territorial issues in the Armenian-Azerbaijani conflict had clear destinations – J. Stalin and G. Chicherin. And this was quite logical, as the former was People’s Commissar for Ethnicities and the latter People’s Commissar for Foreign Affairs of the RSFSR. Telegrams sent to the Centre were generally signed by S. Ordzhonikidze, Secretary of the Caucasus Territorial Bureau of the Central Committee of the Russian Communist Party (Bolsheviks) (CC of the RCP (B)), whom Lenin, Chairman of the Council of People’s Commissars of Soviet Russia, vested with supervising the domestic and foreign policies of the Azerbaijani SSR[2]. 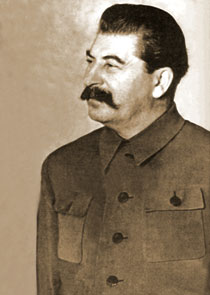 J. V. Stalin
It was Ordzhonikidze who proposed, for the first time in a telegram sent to Stalin and Chicherin in mid-1920, separating Nagornyy Karabakh out as an autonomous region within the existing Azerbaijani SSR[3].

For his part, Stalin first laid out his position on the Armenian-Azerbaijani territorial conflict in a telegram to Ordzhonikidze on 8 July 1920: “My opinion is that one cannot endlessly manoeuvre between the sides. One should back one of the sides, in this case - Azerbaijan and Turkey. I have spoken to Lenin, he doesn’t mind”[4]. However, Stalin approached the resolution of territorial issues from the perspective of a given political situation.

Stalin said in his speech: “If they want to learn to whom the Zengezur valley and Nakhchivan belong, then these (lands) cannot be handed over to the current government of Armenia. They can be, when there is a Soviet one (government)”[5]. It is clear from Stalin’s statement that a plan to transfer Nakhchivan and Zengezur to Armenia was prepared by the top Bolshevik leadership in Moscow even before its sovietisation.

The implementation of these plans began immediately after the formation of the Armenian SSR at the end of November 1920. In an article titled “Long live Soviet Armenia”, published in “Pravda” on 4 December 1920, Stalin flagrantly distorted the text of the 1 December 1920 declaration of the Baku Council and solemnly proclaimed the transfer of Zengezur, Nakhchivan and Karabakh to Soviet Armenia[6]. 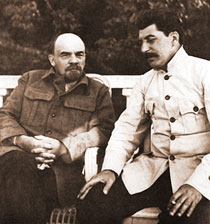 Lenin and Stalin in Gorky. 1922
Karabakh within Armenia but, as a result of Stalin’s intervention, at its 5 July 1921 session the plenum passed a contradictory decision, “keeping” Nagornyy Karabakh within the Azerbaijani SSR.

For this reason, Nagornyy Karabakh’s autonomous status within the Azerbaijani SSR is currently interpreted by Armenian politicians and historians as one of the grievous consequences of Stalinism.

Let us consider Stalin’s role in this problem on the basis of documented facts. According to his biographical chronicle, Stalin was on holiday in Nalchik from the end of May 1921[8]. Approximately one week before consideration of the Nagornyy Karabakh issue at the end of June 1921, he cut short his holiday and arrived in Tiflis. It should be noted here that Stalin was also in Tiflis because of Armenia’s claims on Georgia. Armenia was demanding the Akhalkalaki and Borchali uyezds[9].

Armenia’s diplomatic representative to Georgia, A. Bekzadyan, said on 25 June 1921 in Tiflis, at a session of the commission to demarcate the borders between the republics of the South Caucasus: “Currently, without sufficient territory, Armenia cannot exist as a politically independent entity. In view of this situation, we find it extremely necessary to make territorial additions from the neighbouring republics – Azerbaijan and Georgia – to Armenia”. The protocol of the session notes that during a meeting between A. Myasnikov (chairman of the Council of People’s Commissars of the Armenian SSR – writer’s note), Bekzadyan and Stalin, Stalin shared this point of view[10].

So, Stalin arrived in Tiflis and participated in the sessions of the plenum of the Caucasus Bureau of the CC of the RCP (B) having already had conversations with the Armenian side; he was aware of their claims on the neighbouring republics and backed the idea of expanding the territory of the Armenian SSR at the expense of the Azerbaijani SSR. From 2 to 7 July 1921, 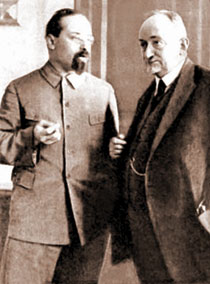 Karakhan and Chicherin. 1930
Stalin participated in the work of the plenum of the Caucasus bureau of the CC of the RCP (B) as the People’s Commissar for Ethnicities and representative of the Centre. It should be noted that although he attended the discussions on the Karabakh problem, he did not speak and did not take part in the voting[11].

It is also interesting that on 4 July Lenin sent a telegram to Ordzhonikidze in Tiflis, which read: “I am surprised that you are interrupting Stalin’s holiday. Stalin needs to have more rest.”[12]

When considering Stalin’s role in the resolution of Nakhchivan’s status, Armenian writers conceive a theory of collusion between Soviet Russia and Turkey in a war against Armenia as the principal reason for the overthrow of the Dashnak government in November 1920. A component part of this policy, they believe, was the sacrifice, by a militarily weak Soviet Russia, of the “Armenian lands” of Nakhchivan and Karabakh to Azerbaijan in exchange for Ataturk’s continuation of the war against Entente aggression. In their assessment of the Moscow Treaty of 1921 between Turkey and Soviet Russia, these writers distort the terms laid out in its item 3 and talk about “Nakhchivan’s entry into Azerbaijan”, accusing Turkey of unleashing war against Armenia and supposedly seizing its territories[13].

Declaring Stalin to be the main culprit in the resolution of the Nakhchivan issue in Azerbaijan’s favour, Armenian researchers often cite the memoirs of Fuat Cebesoy, a member of the Turkish delegation to the Moscow conference, who wrote in his memoirs: “Our agreement with Chicherin came as a result of Stalin’s intervention. Difficulties that arose during the talks were also overcome as a result of Stalin’s intervention.”[14] 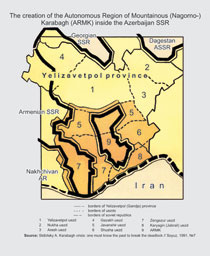 The difficulties in the talks were actually caused by the unfounded demands made by Chicherin on the Turkish side to transfer to Armenia Van, Bitlis, Mus and other Turkish provinces with large Muslim populations. This is why, in a 12 February 1921 telegram addressed to Lenin, Stalin called on him to “ban Chicherin from sending notes to the Turks dictated by the Armenian nationalists”[15].

Stalin’s position by no means stemmed from any particular liking for the Turks. Evidence of this is a letter from S. Ter-Gabriyelyan, representative plenipotentiary of the Armenian SSR to the RSFSR, about a conversation with Stalin. The letter was sent on 15 January 1921 to the CC of the CP of Armenia: “… I talked to him for a long time. Stalin and, apparently, other comrades have changed considerably their attitude towards the Turkish movement, thanks to the quite defiant tone with which they have begun addressing Russia”[16].

The reason for the change in Stalin’s position was Soviet Russia’s international standing. The ongoing civil war in the country, failures on the Polish front and, finally, the Dashnak seizure of power in “Soviet” Armenia in February 1921, i.e. precisely on the eve of the Moscow conference, compelled the Bolshevik leadership, headed by Lenin, to be more tractable. On the other hand, in 1921 Stalin did not yet have the power to cast the deciding vote on such important issues.

On the whole, as shown by Stalin’s speeches on questions concerning the demarcation of borders between the Soviet republics of the South Caucasus, he always took a timeserving position, depending on specific circumstances and changes in the regional situation. In particular, in the 1920s, Stalin viewed the establishment of rigid control by the Union centre over Azerbaijanis and Armenians to be the only way of settling relations between them.

Throughout the period that Stalin was in power, the main criterion of his pragmatic imperial policy in state and administrative demarcation was not historical reality, but the achievement of some political consensus to provide stability within the unitary, multi-ethnic state which was the USSR. 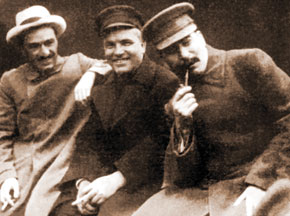 J. V. Stalin, S.M. Kirov and A.I. Mikoyan. 1932
The above-mentioned facts prove the groundlessness of the Armenian theory that Stalin supposedly “gave Nagornyy Karabakh and Nakhchivan away to Azerbaijan” based on some particular liking for Azerbaijanis.

For Stalin, the Azerbaijani territories were a bargaining chip in a wider strategic game, the essence of which was the speedy creation of Soviet republics in the South Caucasus with the prospect of their subsequent inclusion into a single, multi-ethnic and effectively unitary Soviet state. Therefore, on the question of the demarcation of borders between the Soviet republics of the South Caucasus, Stalin’s position was based not on historical realities, but on whatever served the time; this depended on specific circumstances and any changes to the situation in the region.

About the author:Ilqar Niftaliyev Doctor of Philosophy in history. Senior scientific fellow at the Institute of History of the Azerbaijani National Academy of Sciences.