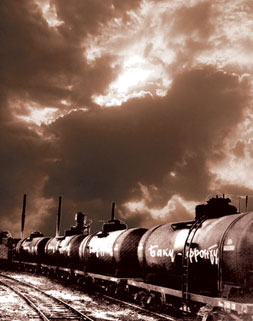 Azerbaijan was part of the Soviet Union during World War II (1939-45). As well as fighting on the Soviet-German frontlines from 1941-45, there was also the home front. Once the war started, industrial workers were mobilized into the army. Young people and people with no industrial experience replaced them. In Baku alone, up to 70,000 young people began their working lives then.

From the first days of the war, Azerbaijan became the front’s armoury. Trains full of oil products, weapons, munitions, military supplies and foodstuffs formed a continuous supply line from Baku to the front, and the famous Katyusha projectiles entered production. Sixty-three new oil and chemical industrial enterprises were built and launched in Baku between 1941 and 1945. A hundred new chemical products, including 36 types of lubricating oil, 26 kinds of fuel and explosives, nine brands of aviation gasoline, and eight kinds of diesel fuel, were made. In late 1942 production included 130 different weapons, munitions, other military supplies, as well as medicines and their raw materials - calcium chloride, sodium chloride, potassium iodide, white streptocid, surgical silk thread, cotton and syringes.

An analysis of the 65 years that have passed since victory recalls Azerbaijan´s participation in the war, including its role in supplying the front with oil and oil products. Very unfortunately, this issue is covered one-sidedly in Soviet histories and in memoirs of the war; for some reason, the work of Baku’s oilmen in fuelling the front has not been properly evaluated.

In 1941, Azerbaijani oilmen were tasked with extracting 23m tonnes of oil: increasing average daily extraction to 63,014 tonnes. From 1941-42, Y. Mammadaliyev, R. Ismayilov, V. Qutiyra and others developed and used in production 17 important technological processes for producing high-quality petrol and other oil products. In 1941, 930 oil wells were drilled and 752 wells were brought into operation. 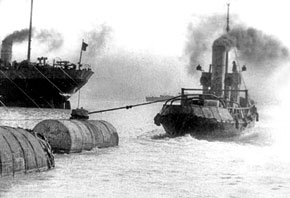 Oil and sweat in figures 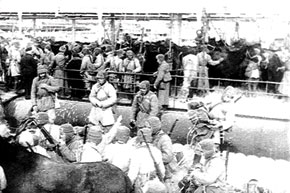 Soviet history stresses that, nearer the end of the war, oil production in Baku fell to 14.6 per cent, and it blames Baku oilmen for this. In fact, one of the main reasons for the decline in oil production was that, by decision of the SDC, all drilling offices were relocated to the East in the second half of 1941 and throughout 1942. About half of the oil equipment and engineering and technical staff were sent to that area, which was promptly called “Second Baku”. Moscow/the Centre was also notified about the reasons for the fall in oil extraction in Azerbaijan and the impossibility of providing more than 10m tonnes of oil in 1944. Ignoring these explanations, the Centre planned for extraction of 12.8m tonnes of oil.

All eyes on Baku’s oil 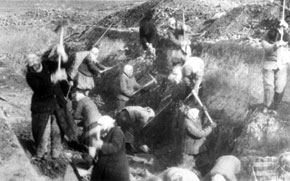 Digging defence lines near Baku city. 1942
It goes without saying that if the German government was to fight a war, it could not have ignored Baku and its oil-rich fields. Since Germany was fully aware of the importance of Baku oil to the war, the seizure of the Caucasus and occupation of its oil-producing districts was a significant part of the Wehrmacht’s plans.

Baku oil also featured prominently in the strategic military planning of France and the UK.

Let us recall several essential factors in these events. When Germany occupied France – in June 1940 - a German corporal got hold of a secret French archive at a railway station in the small town of La Charite. The archive had been removed from Paris and it included a transcript of recent English-French talks. It transpired from these secret documents from French headquarters that seizure of the Caucasus and the Baku oil industry was also a priority of French and UK plans.

After the Soviet-German agreement was concluded, France still planned to take the Caucasus oil fields, primarily in Baku. In September 1939, Officer Paul de Villeliyum was tasked with finding out about Germany’s oil supplies and its potential receipt of Soviet oil. 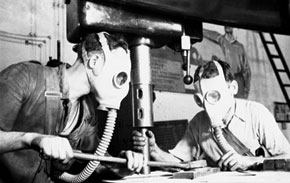 Technicians of Factory ‘N’ working in gas masks. 1941
He identified the potential as being about 1.5m tonnes and believed it was theoretically possible to carry out an air attack on the oil fields. French Finance Minister Paul Reynaud even inquired about a possible bombardment of Caucasus oil fields by the French Air Force (AF) from Syria, in a conversation with Villeliyum on 10 October 1939. The two discussed the problem of French and British ships getting through the gulfs of the Black Sea.

London also worked on seizing the Caucasus, especially Baku. The British defence coordinator, Lord Chatfield, sent a report to the government in which he said that the USSR had three main oil extracting areas – Baku, Groznyy and Maykop.

It is clear from the above that London and Paris understood well and appreciated the extent to which Baku oil was important to the USSR. Thus, it was planned to carry out a strike against Baku´s oil industry during military operations in the Caucasus. The allies’ aviation detachment was to consist of six to eight aviation groups, each having 13 heavy bombers. Six groups alone, consisting of French Farman 221 and Glenn Martin planes, were to drop 70 tonnes of bombs on 100 oil refineries during every flight. As can be seen, the plan was in deadly earnest 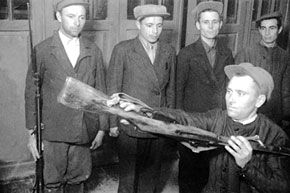 The western allies had numerous options for an attack on Baku and, after long discussions, two plans – the British “MA – 6” and the French “R. I. P.” - were developed in April 1940. The commands of both sides believed that 90 to 100 planes were needed to carry out an attack on the Caucasus oil fields. It was planned to destroy Baku within 15 days. However, Turkey did not join the West´s plans, and this frustrated the plan to attack Baku.

An analysis of war literature, maps of combat operations and commanders’ reports allows us to conclude that Germany was conscious of Baku, not only during the first six months of the war, but also as the war went on.

Naturally, the USSR leadership was aware of all these plans and a number of measures were taken to protect the Caucasus.


So, based on the above, we can say that the price paid for victory should not just be measured in terms of the numbers of people killed on the frontline and on the home front, but also 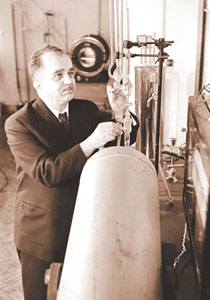 Yusif Mammadaliyev – President of Azerbaijan SSR Academy of Sciences, Doctor of Chemistry
in terms of the importance of and the role played by Baku oil. If not for Baku oil, the Soviet Union’s victory might not have been possible. However, with the establishment of the “Second Baku” by the Soviet leadership, Baku oil fields failed, wells were blown up and the potential of the personnel and machinery were destroyed. Baku was left off the list of “Hero cities” because of the Centre’s double-standards.

A total of 218 republic-wide subbotniks [compulsory extra working days – ed.] were held in the war years to collect ferrous and non-ferrous scrap metal, and 319,191 people participated in these subbotniks. A total of 255,584.8 tonnes of non-ferrous and ferrous scrap metal were collected in the republic and taken to metal working factories. The weight of scrap metal collected was, on average, enough to make 2,380 tanks or 3,400 medium-calibre cannons.

The Azerbaijani people also donated money. In the war years, workers in towns and villages gave over 295m manats of their own money, as well as 15.5 kg of gold items and about 1 tonne of silver, to the defence fund. A total of 215m manats were collected from the people to set up tank detachments and air squadrons. 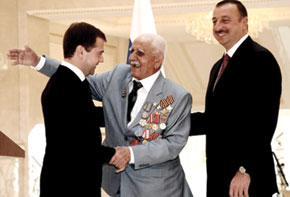 Dmitri Medvedev, President of Russia, awarding 2nd and 3rd rank rewards to Agadadash Semedov, veteran of the Great Patriotic War. 2008
So the facts make it clear that on the home front Azerbaijan played its part and took an active role in the achievement of victory over fascism.

About the author: Mais Amrahov is a Professor at the Azerbaijani State Pedagogical University and Doctor of Historical Science. He has written books and articles on Azerbaijan in World War II.