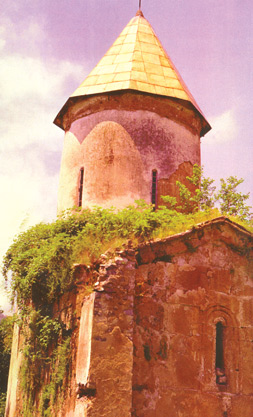 Caucasian Albania should not to be confused with the country of Albania in the Balkans. The Caucasian Albanian kingdom covered much of present-day Azerbaijan between the 1st and 8th centuries AD.

The origins and formation of the Albanian Church are closely associated with the history of eastern Christianity. As the new Christian faith spread, theology was interpreted creatively to meet uniquely Albanian interests.

Christianity first spread to the countries where Jews banished from their motherland had settled. Dispersed Jews were amongst the first to spread Christianity. Ancient Jewish settlements in Caucasian Albania were fertile soil for the acceptance of Christianity in the region.

Today there can be no doubt that the Mountain Jews included ancient Israelites who moved from Persia and settled in the territory of historical Azerbaijan. I drew attention to this back in 1987 and believe that there are descendants of the lost Jewish tribes among today’s Tats. I found confirmation of this in sources about the resettlement of Jews-Israelites, who were highly skilled craftsmen, to the Caucasus, in particular to Albania and the Caucasian coast, a resettlement forced by the Persian kings (Parthians and Sasanids). The anthropological character type of the Mountain Jews, their ethnic purity maintained by marrying only within their ethnic group, are further confirmation. This radically distinguishes them from European Jews and has led to them retaining their biblical appearance. I was also convinced by the fact that some Mountain Jews remain true to Judaism. This is no minor factor if we take into account Judaism’s segregation, the fact that the religion is professed by Jews only.

My arguments were shared by Academician Ziya Buniyatov and Hebrew specialist 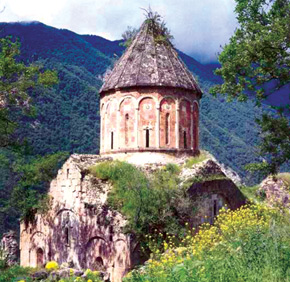 I have discovered that Nazarenes were in Absheron, alongside Tats and Mountain Jews. It was the Jews who first called the Christian-Jews Nazarenes, which can be seen in the Acts of the Apostles (chapter 24, verse 5). There is a difference between Christians and Nazarenes. Nazarenes recognised Jesus Christ as their Messiah, God, but they considered it necessary to observe the Law of Moses. The Christian Church was lenient towards the Nazarenes and did not consider them to be heretics. Nazareneism is believed to have survived till the 4th century.[1] Traces of Nazarenes have been found in three villages in Absheron - Buzovna, Shagan and Yeni Surakhany. Inscriptions mentioning the Nazarenes have been discovered in these villages. Above the entrance to a mausoleum in Buzovna a two-line Persian inscription in Arabic script says: 1. "This is the grave of Shmavon (Samavarz) Bahram-Nazarene; 2. Muharram 706" (12 August 1306). The inscription was first read by S. Kerim-zade who transliterated it as "Shmavon", while the word "narsa" was reproduced as "Christian". A well-known epigraphist and corresponding member of the National Academy of Sciences of Azerbaijan, M.S. Neymatova, read shared by Academician Ziya Buniyatov and Hebrew specialist Prof Filippenko in France "narsa" to mean "Nestorian".[2] We are fully confident that this refers to a Nazarene. Another inscription from the settlement of Shagan, also above an entrance to a mausoleum, reads as follows in M.S. Neymatova’s interpretation: "This is the building of Bulgag-a Bulgarar-a". Commenting on the name, M.S. Neymatova writes that in all probability Bulgag-a and Bulgarar are Jewish names which gave birth to the Arab names Abul-l-Hakk and Abul-l-Karar.[3]

To this day there is a district in Buzovna called Nyazaranly mehellesi, "the Nazarene quarter". The inscriptions containing Jewish names accompanied by the word "narsa", the Nazarene Quarter and Mountain Jews’ permanent residence in Absheron lead us to believe that ancient Jewish Christian communities were once located in the region. Subsequently, 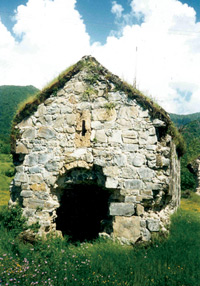 Recent studies dealing with the Mountain Jews of Azerbaijan point out that contemporary Tats-Jews, these descendants of ancient Jews who migrated to the Caucasus as far back as the Achaemenid era (648-330 BC), descend from the tribes of Judah and Levy and partly from Benjamin.[4] The main linguistic vocabulary of the Tats-Jews goes back to Hebrew but with a great number of Iranianisms, research has shown.

Just as the Roman and Antioch churches were created first by the preaching of the apostles, by their disciples and members of the Jerusalem Church, then by Jews driven out from Rome, including Christian Jews, the Albanian Church was created by the apostle Bartholomew and a pupil of the apostle Thaddeus, Eliseus. The Albanian Church was created also with the blessing and consecration of the patriarch of the Jerusalem Church, Jacob, the Lord’s brother. This is the first apostolic period of Christianity in Albania.[5] We call this the Syrophile period. It dates from the 1st to the 4th centuries and is associated with the names of the apostles Thaddeus, Bartholomew, Thaddeus’ disciple Eliseus and the Nazarenes. 33

The next stage in the formation of the Albanian Church is the proclamation of Christianity as the state religion at the beginning of the 4th century. This second period in the development of Christianity is associated with Gregory the Illuminator, a Parthian by origin who was educated in Caesarea in Cappadocia. The period is also associated with the Albanian king, Urnair. While the foundations of the first Albanian Church, the "mother of churches" on the left bank of the River Kura in Kish, were laid during the first apostolic period, during the second period Gregory the Illuminator laid the foundations of the church in the town of Amaras on the right bank in Albania.[6]

In the 4th century, when Christianity became the state religion in the Eastern Roman Empire, in the Caucasus, in Arshakids and their successors, the Mihranid grand princes, tried to unite and consolidate the diverse ethnic groups and polytheism on the basis of a common religion. Despite their Persian origin and kinship with the kings of Iran, once the Albanian kings and grand princes had become the rulers of 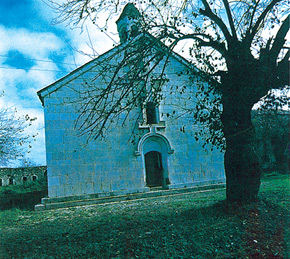 Amarass, IV century, Garabagh, Khojavand district
Albania, they assessed its strategic location (there were routes via Derbent through which the steppe nomads were constantly breaking through into the region and threatening two empires - the Roman and Persian) and decided to rule independently. For this to happen, it was essential to profess a common religious ideology within the whole country to oppose the Zoroastrianizm-Mazdaism of Iran. Only in this way was it possible to preserve both the state and Albanian identity.

From the 4th century to the fall of the Albanian kingdom in 705, Christianity was the dominating ideology in the Albanian state, inculcated both by the Albanian Arshakid kings and the Mihranid grand princes.

The formation of the Albanian Church is similar to that of the Christian church in Georgia, which also experienced the apostolic period of the 1st century and was genetically related to the Jerusalem Church and the early adoption of Christianity here is also linked to ancient Jewish settlers. There are differences as well as similarities. While Albania was inclined towards Iran in its foreign policy, Georgia lent towards the Roman Byzantine Empire. Both churches are part of the history of eastern Christianity.

First of all, I would like to clarify what is understood by "Christianity of the Caucasus". To date the Christian Caucasus has been believed to include the Christian churches of three countries, Albania, Georgia and Armenia.

The acts of the councils, the toponyms of the places where the councils took place and the registers of the councils of all three churches - Albanian, Georgian and Armenian - are of great interest in studying this question, with the reservation that, for various reasons, not all the councils preserved a complete record in their registers. As a rule, the registers recorded the chief eparchies and important parish churches. At the same time, the registers mentioned the representatives of secular nobility with their patronymic names and the names of their territorial 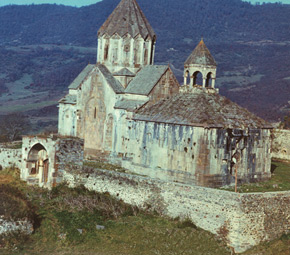 The examination of council acts makes it possible to identify the geographical ranges of the churches. As an example, let’s begin by considering the council acts of the Armenian Church.[7] A very interesting picture emerges. Nerses the Great convened the first Armenian Council in 365, in the settlement of Ashtishat in the Taron region, on the bank of the Aratsani River, a tributary of the Euphrates. Ashtishat was one of the centres of paganism in ancient Armenia where temples were dedicated to the god Vaagn and goddesses Ananit and Asthik. In the pagan era Ashtishat belonged to the family of the high priest Vahuni and in the Christian period it became a hereditary domain of the family of Gregory the Illuminator.[8] The book of Armenian canons, the Kanonagirk, said: "Nerses convened the council in the village of Ashtishat where the first church of the Armenian country, the mother of Armenian churches, was built, that’s why the first Council-Synod was convened here." This council did not keep a register, but the location of Ashtishat and its importance for the history of the Armenian Church are of interest. As has been noted above, Ashtishat was situated in the Taron region, on the banks of the Aratsani, a tributary of the Euphrates, that is, in the eastern part of Asia Minor, not in the Caucasus. Analysis of the records of subsequent councils shows that nearly all the episcopacies of the Armenian Church and its councils were located along the eastern bank of the River Tigris 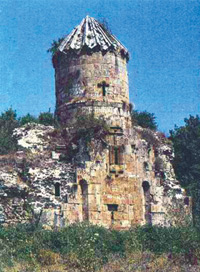 Gtich, XIII century, Garabagh,
Hadrut district,Tugh village
and Euphrates, around Lake Van and in rare cases in the south-west of the Caucasus. They were not in the eastern Caucasus at all. Both existing realities and council acts show that the eparchies of the two Caucasian churches - Albanian and Georgian – were located in the east and west Caucasus. The Albanian eparchies were located along the left and right banks of the River Kura. As for the Armenian Church, it embraced mainly the eastern part of Asia Minor and the southwest Caucasus.

About the author: Farida Mamedova is a corresponding member of the Academy of Sciences of Azerbaijan and chairman of the Executive Committee of the Caucasus Albania Research Centre.