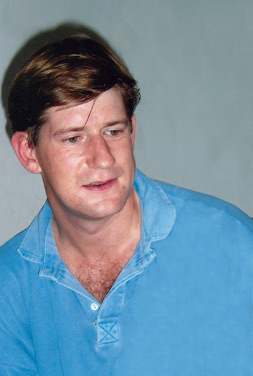 Mr Burnett, tell us a little about yourself?

Education - Eton College and Newcastle University, reading law.
I worked as a researcher for Environmental Resources Management (ERM) Ltd, before coming to Azerbaijan to found Long Forest LLC. In my seven years in Azerbaijan I have worked in a number of fields including being chairman of the AMCHAM Tourism Committee, being a founding member and director of the Azerbaijan Agribusiness Marketing Council, chieftain of the Baku Caledonian Society, instigator and organiser of the Guba Agricultural show which ran from 2001-04. I’m a founding member of Baku Rugby Club and currently director of sponsorship for the Azerbaijan Rugby Federation.

When you came to Azerbaijan what did you like most about our country?

What I most liked about Azerbaijan, apart from the hospitality of the people, was the tremendous opportunity being realised by the oil industry and how quickly other sectors such as tourism and agriculture should have developed.

How long has your Long Forest Company been operating in Azerbaijan and what does it?

Long Forest itself is a holiday resort, consisting of 10 scenically scattered chalets throughout the forest; a restaurant and recreation room offering both Azerbaijani and continental cuisine; a further building with sauna and relaxation area. Activities include horse riding and mountain biking as well as walks through the beautiful Guba country side. In addition, being at the foot hills of Shahdag, Long Forest acts as the perfect base for trips to Xinaliq. With interests in agriculture, we have helped in potato production, jam making, honey production and running the Guba Agricultural Show for three years. With the help of the International School of Azerbaijan (TISA) we have improved the schools in Uzun Mesha and Kurkun. In cooperation with the World Bank we assisted the Guba Executive in constructing a reservoir for 37,000 people and with the Ministry of Ecology, we attempted to establish a local nature reserve, unfortunately with no success. I’ m sure the Shahdag National Park will be more successful. We’ve also tried to help handicraft developmentand in particular have promoted the Guba Carpet Workshop.

Are your company’s agricultural products designed for the local market or for export?

Azerbaijan should not only be self sufficient in agriculture but also be able to export to a number of markets such as the UAE and Europe. Unfortunately, historical constraints and a reluctance to improve means production is irregular and of poor quality, hardly qualities likely to encourage buyers in developed markets. With the help of USAID and other benefiting NGOs we have struggled to improve the supply even to local markets. Although some products such as pomegranates do look likely to improve, recent crises such as avian flu and the government’s response make this the exception as 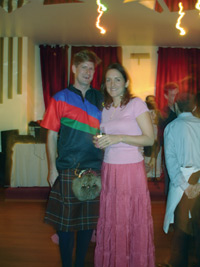 Alex with his wife Vinny
opposed to an improving trend.

As a professional who has been working here for a long time, what are the most attractive fields for you in Azerbaijan? What is the potential of agriculture and tourism, particularly eco-tourism?

Whilst there are many opportunities in Azerbaijan, the focus of the country has remained too long on the oil and gas sector. Whilst this is undoubtedly very important for the country, it means other essential sectors of the economy, such as agriculture and tourism, have suffered. For instance many hotels have been built especially in the last two years, but no effort has been made to attract foreign tourists. From their arrival in the airport, to examples of tourists being detained without reason by the police, Azerbaijan has a long way to go before it can call itself a tourist destination. With pollution flowing into the Caspian unchecked, eco-tourism in the Caucasus Mountains remains Azerbaijan’s strongest card and places such as Xinaliq and Lahij are definitely worth a visit.

As a company working in the non-oil sector in Azerbaijan, has Long Forest done any promotional work amongst British companies?

The majority of British companies work in the oil and gas sector and, without needing to, have been extremely supportive of all our work either at Long Forest or in the development of Azerbaijani rugby. As a member of the British Business Group and the Aberdeen Chamber of Commerce, we have offered whatever assistance we can to British companies working or looking to work in Azerbaijan. As oil money rapidly flows into Baku, many of the foreign oil companies will be reducing their operations and local companies need to realise that the responsibility for the development of Azerbaijan lies with them. Hopefully by attending events we have been involved in, such as the Guba Agricultural Show, the Baku Rugby Festival and the St Andrews Ball, local companies can see that promotion of their business can be fun as well as beneficial.

The conditions created for oil investors in Azerbaijan are highly praised by foreign oil companies. What about the non-oil sector? As a successful business-man doing business in this sector, what do you think of the investment environment in the non-oil sector?

Unfortunately those working in the oil and gas sector do so under the Production Sharing Agreements, which is completely separate and a considerably simpler regime to operate under. Whilst the Ministry of Economic Development has removed some bureaucracy and impediments to business, Azerbaijan still has a long way to go if it is either to encourage further foreign investment or to allow its own entrepreneurs to succeed. If anything, recent increases in fuel prices have not been accompanied with any assistance to developing sectors such as agriculture and tourism in the form of tax concessions.

If it is not a secret, please tell our readers about your future business plans in Azerbaijan.

Azerbaijan continues to offer opportunities and Long Forest remains the focus of our work and we will continue to try to develop more business and are always keen to find other investors.

We know that you are always promoting investment possibilities in the non-oil sector. Would you, please, tell us about your activity in AMCHAM?

AMCHAM, with over a 150 members, is a great organisation through which to meet potential investors. As chairman of its Tourism Committee, I have endeavoured not only to represent our members_ interests, but also to answer questions from those interested in investing or developing the tourism sector of Azerbaijan. Whilst the Ministry of Culture and Tourism attends our regular meetings and assists where they can, many of the problems are beyond their remit, such as poor infrastructure.

It would be interesting to know from you as a Scottish businessman about the relations established between Azerbaijan and the Aberdeen & Grampian Chamber of Commerce?

The Aberdeen Chamber of Commerce has been visiting Azerbaijan for over 10 years and many Aberdonian companies are now working in Baku. With our links in Scotland we hope to encourage this further.

What do you think about the idea of twinning Baku and Aberdeen?

Several years ago we examined the possibility of twinning Guba with a similar agricultural region in the USA under the Sister City programme and I hope in the future this may come about. More realistic is the twinning of Aberdeen and Baku given the number of Aberdonians here. Forty years on, Aberdeen remains a hub of the oil world and twinning it with Baku can only be mutually advantageous.

We know that you worked hard to form the Rugby Club and our National Team. We thank you for all you have done. Could you tell our readers more about this?

From the first team we took to the Dubai Sevens in 2001 and the establishment of the Baku Rugby Club, Azerbaijan now has an internationally recognised federation which played its first fixtures against Bosnia last year. (Qualifying under the three-year residency rule, I was particularly proud to have represented Azerbaijan at international level!) Azerbaijan now has five clubs - a men’s and women’s international team, as well as teams at Under-21, Under-18 and school level.

What you think of the journal Visions of Azerbaijan & Britain which is designed to promote awareness between Azerbaijan and Britain??

The Azerbaijan and Great Britain Youth Society, with whom we have been happy to work with over the years, has been very hardworking in promoting Anglo-Azerbaijani relationships. I hope and am sure that their latest publication will continue to build on this good work and demonstrate to the people of Britain that Azerbaijan’s future is in good hands.