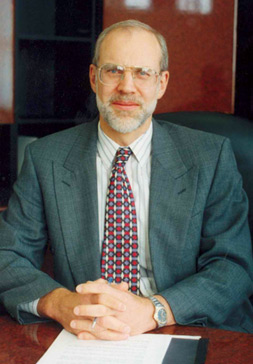 David Woodward, President of BP Azerbaijan
BP Azerbaijan President David Woodward has been made a Companion of the Order of St Michael and St George by Her Majesty Queen Elizabeth II in the New Year’s Honour list, announced on 1 January.

The honour, which was established by the Prince Regent, later King George IV, in 1818, is given for “extraordinary and important service” by UK citizens working overseas. It recognises Mr Woodward’s achievements during his seven years leading BP‘s activities in Azerbaijan. He was appointed President of BP Azerbaijan in January 1999.

“This is a tremendous honour and I am very proud to be recognised in this way,” said Mr Woodward. “It has been a great privilege to work alongside my colleagues in BP, our oil company partners and our contractors, together with the government to realise Azerbaijan’s oil and gas potential.”
“I remain indebted to all those working as part of this wider team for their contribution to the success of our projects. This award is as much a tribute to their efforts as mine.”

“I am very pleased that we have also been able to support the Government of Azerbaijan in its own endeavours, particularly in revenue management and in its ground-breaking adoption of the UK Extractive Industries Transparency Initiative.”

“Over the past 15 years we have witnessed the development of strong links between the UK and Azerbaijan, and I remain committed to furthering good relationships between our two countries,” he added. Order of St Michael and St George
At present 27 BP Azerbaijan employees are working on assignments with BP in the UK. BP also supports the John Smith Fellowship programme which was awarded to two young Azerbaijanis for the first time in 2005, and funds English language courses for local staff, journalists and NGOs, run by the British Council. This year, BP helped set up the UK-Azerbaijan Alumni Network for Azerbaijan students who had studied in the UK.

Mr Woodward received the "Order of Honour" of Georgia in 2003 and the “Order of Glory" of Azerbaijan in 2004.

Badge of gold, in the centre a raised figure of St Michael subduing Satan, encircled by the motto AUSPICIUM MELIORIS AEVI in gold on blue enamel. Set on a white enamel seven-armed cross with fourteen points edged in gold. The badge is surmounted by a royal crown.
The reverse features a raised figure of St George and the dragon. The badge probably belonged to William IV
The Royal Collection