UNS is One Year Old 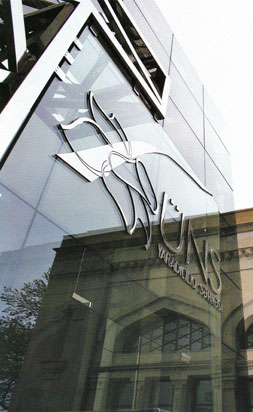 An unusual snow-white builing, or rather a magic palace, a place where theatrical wonders are made. This is the Uns theatre, as it is popularly known in Baku, or the Uns Creative Stage as the director and founder of the project, Nargiz Pashayeva, calls it. The new theatre was opened in Baku on 22 April 2006 and recently celebrated its first anniversary; a year that has seen a great number of interesting projects and legendary meetings. Uns has shown a wide range of genres and proved true to its credo - to invite the best. Pillars of world theatre have performed on this stage and we have received an answer to the question: what is modern theatre? The very name (Uns is from the Azerbaijani word ´ünsiyyət´ and means contact - editor) shows that the arena is much more than just a stage. Recitals and readings, presentations, concerts of classic music are here. here. Literature and painting, music and architecture are enclosed within the precincts of the theatre. Theatrical ideas are synthesized; the trends of the day are discussed here. Uns has become a real barometer of theatre critics. Respect for tradition sits alongside the most daring experiment. Great words and great music are also heard on the stage. From the first day Uns showed that it relies not on quantity but on quality. And this is confirmed by all the productions that have graced its stage.
The theatre´s debut performance was Baku, a musical based on Tofig Guliyev´s songs, staged by Rozetta and Maksimilian Nemchinsky, professors of the Russian Academy of Theatre Arts (GITIS), and folk artist of Azerbaijan Azer Pasha Nematov, 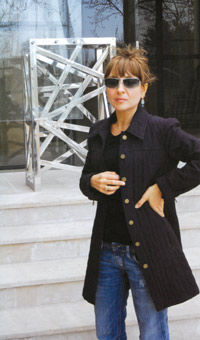 Professor Nargiz Pashayeva, Founder of the UNS Creative Stage
together with Nargiz Pashayeva.
It became the theatre´s calling card. And then visiting produc-tions followed - one more brilliant than the other: the famous Helikon Opera brought Bizet´s Carmen; GITIS´ final year students performed Mozart´s La finta giardiniera (The Phony Gardener); audiences enjoyed an evening with Sergei Yursky and Alexandr Filippenko and Shirvindt and Derzhavin´s wellknown dialogue from Fazil Iskender´s Greetings from Tsryupi; Konstantin Raykin peformed Suskind´s Contrabass and, finally, graduates of Peter Fomenko´s studio staged Lev Tolstoy´s Family Happiness.
It is very pleasant to come here. The proportion and stylistic integrity of the building charm from the threshold. You take your comfortable seat and are soon carried away by events on the stage. The delicate nuances of human psychology, a nice approach to literary origins, the wish to live and hold every lovely moment - these impressions over-whelmed the audience watching Lev Tolstoy´s Family Happiness. It is impossible to watch the performance without reveling in it. Carmen stormed the Uns stage for two nights and the papers described it as "shock therapy". There were no seats left for Helikon with tickets snapped up months in advance. The British newspaper The Guardian described Helikon´s tour to London as "more than great", while the Baku press wrote "thanks to director Dmitriy Bertman for proving Yesenin´s words: ´Talent is always a scandal.´ And thanks to Professor Nargiz Pashayeva who has presented the Uns Creative Stage first as an opera stage, and special thanks for the long lost sensation of shivers down the spine as a result of authentic theatre. Let it be scandalous."
Uns stages performances in diverse styles - from children´s shows to classical music evenings, from chamber performances to monumental classic operas.
The internal layout of the theatre also favours musical evenings, a hero of which is Murad Huseynov, an honoured artist of Azerbaijan and international prize winner. His performance of French impressionist music was unforgettable. 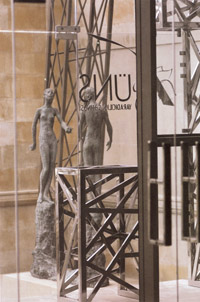 All the visiting actors have stressed the new theatre´s scope and its "special aura and cordiality". Konstantin Raykin said that Uns can be compared with the unique Yusupovskiy theatre, Count Yusupovskiy´s famous house theatre in Moscow. The launch of the new Uns theatre has brought a fresh approach to this ancient and noble art. What is theatre? Theatre is a school. Theatre is spectacle. Theatre is celebration. Theatre is amusement. Uns has provided all these answers. In a year Uns has provided a true feast of the stage, proving that theatre is a celebration, where people not only laugh, but also cry, become excited and suffer, settle philosophical problems and also come and sing.
The life of the theatre is continuing and not only with its star tours and great performances. It is also the daily grind of exhausting rehearsals, the endless search for the unique gesture, glance, sigh. The endless polishing…
The premiere of Elchin´s Shakespeare was recently staged (see the article by Ian Peart and Saadat Ibrahimova for more on this fascinating play). New works by established national playwrights are to follow. One of them is Restaurant Final by novelist and dramatist Mahsud Ibrahimbekov. The show will be performed not only by established Azerbaijani actors but also by talented young performers.
What is mastery? Many can answer this question as they leave the hospitable building of the theatre. Mastery is the ability to work to one´s full capacity. It is when the stage becomes the arena of life. The theatre is achieving its goal - to influence the morality of the people and awaken the sleeping art of the theatre. Uns has quickly become a centre for new revelations. Uns is preparing new surprises for its audience. What? They are surprises because they will be revealed at the last moment. But there is no doubt that they will be capable performances. Number 69, Neftchiler Ave is the address of the new theatre; the number is the symbol of immortality. And this is what we wish the Uns Creative Stage - true creative immortality.