Drumming Up Support for the Arts 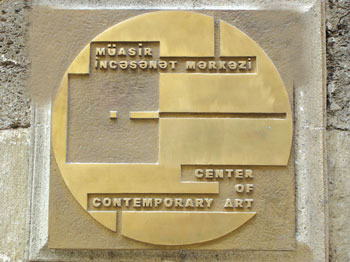 Azerbaijan is still shaping its identity after just 15 years as a single, independent state (second time around). Today, the deepest ripples carrying its name to the world are oily ones the oil drawn from below the Caspian Sea. There are those, however, who work with a different oil to reflect and shape the life of this land: the artists of Azerbaijan are still a surprise in store for much of the rest of the world.

No one who has been to any of the galleries or studios can doubt the abundance of talent and imagination; the task now is to ensure that Azerbaijani art creates its own waves.
The Center of Contemporary Art was opened on 17 January this year with just this in mind; the fact that its founders are themselves artists bodes well for its direction and success. There are, even here, galleries in which the salesman appears to be the main actor - and artists cannot live by brush alone - but I have found myself buying either from the artist or from galleries 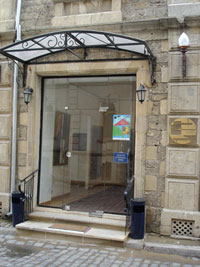 where I can discuss the art before the manat.
The Center is housed in the former Miniature Art Gallery in cobbled Qulle Street, Icheri Sheher (Old City) - just above the Caravanserai and just under the gaze of those three curious stone cats. These cats will soon, one suspects, be witnessing a wondrous procession of practitioners of every kind of art, followed by enthusiasts, critics and spectators.
The Khalilov family is well-known in Baku’s artistic circles; Farhad and son Bahram are active producers and promulgators of creative work and it has been for a long time their dream to bring it all together. Working with various groupings - the United Artists’ Club, the Baku Bienniale and the Union of Artists, with the support of the Ministry of Culture & Tourism they finally got their chance a year ago and Farhad oversaw the conversion of the premises. Now that the Center is up and running, Bahram, as its president, is taking time out to develop its programme of activities.
"I’d prefer to be in my studio, but we need to do something for the community," he says, recalling that in his time in the USA children were taught in school about Picasso and other artists; in Azerbaijan he believes it is the artists who have to reach out and educate society. Already in preparation is an annual children’s visual art project for which schools in all regions will be asked to encourage their pupils to participate; the only criterion for involvement being the quality of the work. The finale will be a broad-based festival and celebration, involving the children’s orchestra among contributors from the other arts. The idea is to bring 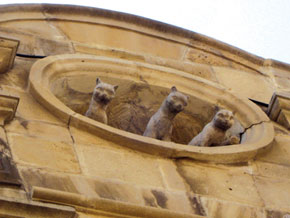 Cats look down on the Center of Contemporary Art
all kinds of creativity together, from all parts of the country, to cross the boundaries and perhaps even inspire different forms of art, "we want to develop something absolutely new", says Bahram.
This is why the Center of Contemporary Art already has a cinematographers’ club; it began fortnightly but now meets every Friday. Saturday nights are music nights, with films of concerts and discussion - first up was a session devoted to pioneering Baku jazzman Vagif Mustafa-zadeh, featuring rare footage of a jam session from 1978 and a lively debate about his influence today. There is talk of a writers’ group; an opening for young writers to present their work. The weekends will also have a visual arts programme of documentaries, films and discussion. These events occupy the cellar; the perfect venue for an atmospheric cafO society.
There is, of course, a large exhibition space and it housed the impressive opening display of works of the famous: Sattar Bahlulzade’s distinctive Absheron landscapes; the underground: Mirjavad’s fierce darkness, as well as younger, contemporary artists. One of the last group included one of my personal favourites: Bahram’s own 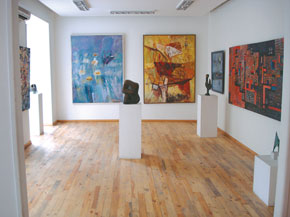 large, semi-abstract Paradise Garden - the longer you look at this painting, the more it draws you in, the more it stirs your own thoughts -a wonderful gift from the painter to the viewer’s imagination. Incidentally, it was a visitor who gave the work its title; a neat example, perhaps, of the involvement the Center wishes to stimulate.
This exhibition gave way, during the Novruz Bayram holiday, to a Jazz Week project which also promises to become an annual event. Jazz films and documentaries were the backdrop to an installation work and demonstration of free drumming by Vilnius-based Russian artist/musician Vladimir Tarasov. The installation video played on the texture and resonance of the materials making up a drum kit, from the shimmer of a cymbal to the thud-shock of the bass drum. Meanwhile, down in the basement, Tarasov soloed an entranced audience along a meandering and thoughtful trail of percussive sounds.
Tarasov’s appearance was the first in a venture to bring the live art of the world to Baku; on this occasion in conjunction with the Russian State Centre of Contemporary Art. Other connections are being made ventures with 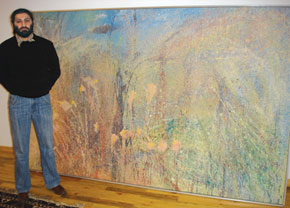 Bahram Khalilov alongside his work 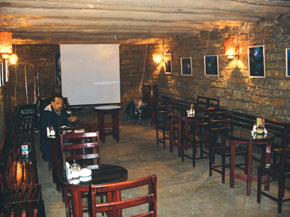 Norwegian involvement are in prospect - and there is a guest room in the Center, set aside for visiting artists in residence. Exchange with artists from different traditions is all part of the project to enrich the local art scene.
The other side of the coin is, of course, to promote Azerbaijani art and artists abroad and Bahram sees language as one of the hurdles to be overcome here. He cites examples of artists being approached by journalists or collectors and being unable to communicate directly, because they don’t have a common language the most common being English. Also, "I want our artists to study the language which many of the books and materials use.....I don’t want our artists to be seen as uneducated simply because they don’t know the common terminology of art."
"Perhaps there could be an English speaking club, a language exchange. It could even help expats with their language learning, for example, to watch a familiar film in Russian and then discuss it."
As he continues, Bahram painter, percussionist and now promoter/facilitator - convinces with his gentle determination that the theatre group’s "performance with the public", the Eastern Night of poetry and music, the photography and the information centre will happen. One hopes that these creative ripples from the edge of the Caspian help to carry Azerbaijani art to the furthest shores.