The Eighth Wonder of the World - the Sheykh Safy carpet 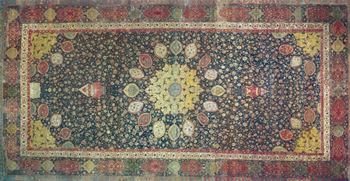 Back in 1962 I had the occasion to visit Great Britain together with a group of Soviet journalists. We visited the editorial offices of the well-known newspapers The Guardian, The Times, and The Daily Telegraph, Reuters news service and of course the BBC. The meetings were very interesting and beneficial in broadening the experience of us young journalists. Our programme also included trips to the famous British museums. We went to Madame Tussauds´ waxworks and the British Library, where manuscripts of Nizami and Fizuli´s works are kept. In the British Museum we saw Egyptian mummies and tombs for the first time. But I was influenced most deeply at the Victoria and Albert Museum. At last I managed to see the famous Ardabil carpet Sheykh Safy.
I had heard a great deal about this carpet from my parents. I must confess that the gigantic carpet behind glass walls had a powerful effect on me. I could not believe that there could be such an enormous carpet in the world. A museum employee discovered that I was from Azerbaijan and told me about the history and dimensions of the carpet. The largest carpet in the world is 5.34 m wide and 10.51 m long. The total area of the carpet is 56.12 sq. m.
The Victoria and Albert Museum is one of the richest museums in London. The museum was founded in 1852 and 47 years later was named after Queen Victoria and Prince Albert. Four million exhibits from different parts of the world have been collected at the museum. Museum employees told me that for only one of these exhibits have they celebrated the 100th anniversary of its acquisition and that was the Azerbaijani Sheykh Safy carpet. The history of the carpet has been researched in historic literature and by the media. I consulted prominent representatives of Azerbaijani carpet-weaving, Latif Karimov and Kamil Aliyev, about the Sheykh Safy carpet.
The idea of creating the carpet belongs to the founder of the Azerbaijani Safavid state, Shah Ismail Khatai´s son Tahmasib I. His goal was to perpetuate his 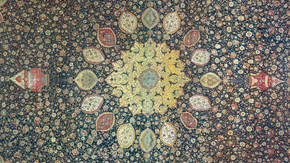 grandfather Abu Ishaq Ardabili´s memory. Specialists think that the mosque and tomb complex and the weaving of the carpet belong to the same place and time. The analogy between the writings and miniatures on the cupola of the mausoleum and the patterns on the medallion at the centre of the carpet are obvious evidence of this.
It has already been established that the carpet was woven by a Tabriz craftsman, Maqsud Kasheni. He spent two years on this carpet and ended his work in 1539. The carpet is distinguished by its rich colouring, the variety of hues and extraordinary fineness. The master craftsman stitched verse from Hafiz and noted his own name below: "The work by the slave of the holy land, Maqsud Kasheni, 946". It did not occur to the craftsman that his carpet would be called "the eighth wonder of the world".
Only recently have specialists been able to answer the question, how did the carpet get to London? The theory goes that the employees of the mosque and tomb complex could not resist the large sum offered for the carpet by an Englishman and sold it. This theory is close to the truth. Because at that time branches of the Manchester trade company Ziegler and Co. were extending their activity in Tabriz. There was talk that an employee of the company had been interested in the price of the carpet. Traveller U.R. Holmes, who was in Ardabil in 1843, wrote in his Tales from the Caspian Coast after returning to his country: "I have never seen a carpet like the one on the floor in the Safavid mosque-tomb." However the carpet disappeared from the mausoleum in 1891.
According to an employee of the museum, the Sheykh Safy carpet, which was exhibited in the Vincent and Co. auction house in Wigmore Street in London in 1892, caused a stir in the English media. Employees of the Victoria and Albert Museum participated in the auction. The starting price was a fantastic amount for that time - 200,000 pounds. The carpet attracted the attention of German specialists too. The museum did not have the necessary sum for the carpet, but as professionals they tried to get hold of this unique exhibit. The Victoria and Albert Museum resorted to the help of British society to purchase the carpet. The British people supported the appeal, showing their solidarity with the museum. Finally the sum was raised and the carpet became the property of the Victoria and Albert Museum. Since then thousands of people have visited the museum to see the Sheykh Safy carpet, one of the museum´s proudest exhibits.