Whether you’re living in Baku full time or just visiting on a short business or tourist trip, there’s no shortage of things to do around town. But if you’re like me, sometimes you just want a break from the urban hustle and bustle. Azerbaijan is a delightfully small country which means it’s possible to get anywhere within its borders in no more than five or six hours. For those with little time to spare, there are plenty of quiet destinations within a three-hour radius, allowing you to leave in the morning and be back by bedtime. The following is a selection of six easy-to-get-to destinations where you can also find some peace and relaxation. 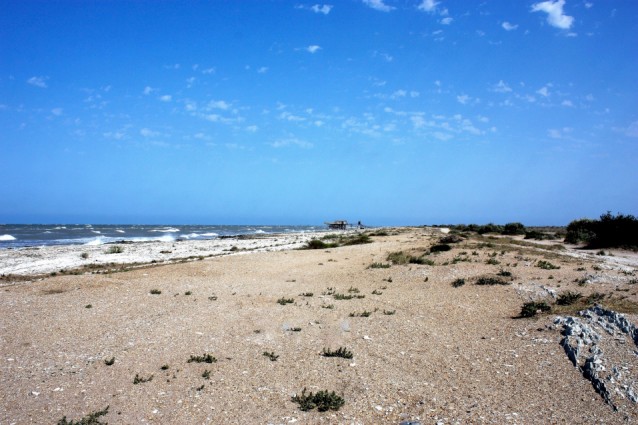 Not a soul in sight on Shuraabad beach. Photo: Natalie Maximovich

Experience the solitude of Shuraabad beach

An hour northwest of Baku lies the tiny village of Shuraabad, which is truly off the beaten path, yet easily accessible from the main highway. Near the village of Sitalchay, take the offramp and head towards the sea.

If you follow this road until it dead ends, you’ll find yourself on a white shale beach where sideways layers of sedimentary rock cut through the terrain in beautiful, undulating waves. Within the rocks’ grooves are trapped millions of seashells that have been carried there by the pounding surf. There’s a small area sheltered by a sand bar where swimming is possible, but be careful – there’s no lifeguard on duty on this empty stretch of coast, and the trade winds make for some pretty fierce waves.

Actually, just a few kilometres south along the coast is a small resort called Paul’s Beach that offers kite surfing lessons for those bold enough to meet the waves head on. Behind the beach, hundreds of acres of desert crawl towards the craggy foothills of the Caucasus Mountains. The magic in this location lies in its solitude. It’s not a tourist hotspot, so you likely won’t meet anyone but some of the local villagers, and it offers no amenities except those that nature itself provides. There’s no noise from cars or buses, only that of the pounding surf and the desert wind rattling the sage bushes. It’s a wonderful place to take a stroll, smell the salty breeze, and throw some stones into the mighty Caspian Sea. 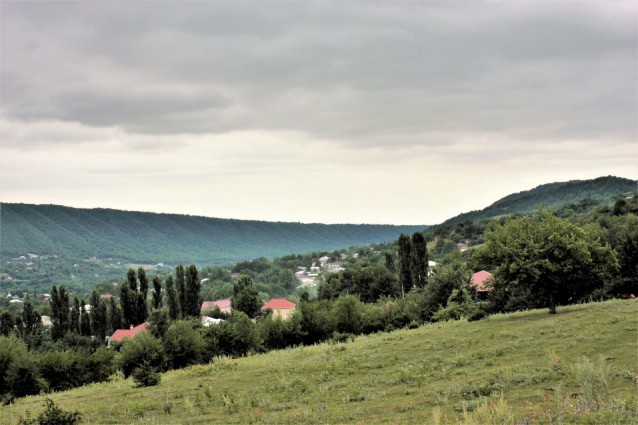 The sounds of a wedding rose up from the village as we spread a blanket on the grass and enjoyed some sausage, cheese and apples. Photo: Natalie Maximovich

Picnic near the village of Qechresh

Only two and a half hours’ drive north from Baku is the quaint village of Qechresh. As we drove along the road from Quba out to this small town, we found ourselves suddenly enveloped in green darkness. The forest on either side of the road grows thick enough that we initially had to turn our lights on to see the way until our eyes adjusted. Every hundred metres or so, young men selling fruit and leather or plastic cups full of nuts beckoned us to stop and indulge ourselves. For the next several kilometres, the road was lined with picnic restaurants, where one could stop and enjoy a cup of tea and a meal at a table under the trees. Most of these restaurants offer kebabs, fresh tandir bread, and a small variety of other options.

We opted to drive on a little further to a small, scenic overlook on the far side of Qechresh. Here, a couple acres of open land sits on a slight rise overlooking the valley. Short grass dotted with bushes and small trees made for an idyllic picnic spot with a little more serenity and openness than the busy ones in the woods offered. There’s plenty of space to spread out a blanket, set up a mangal to cook your own kebabs, and enjoy the picturesque view of village roofs peeking out of the treetops as they dance in the mountain breeze. 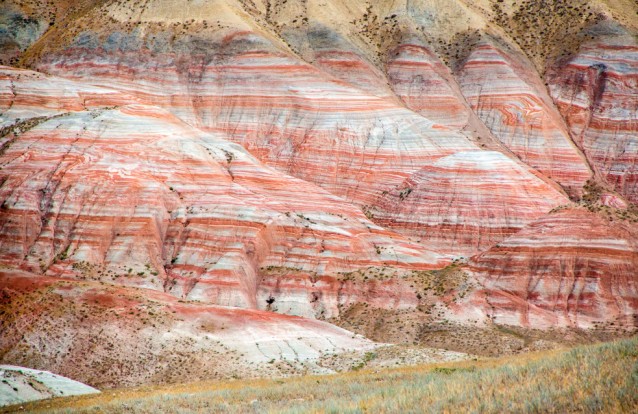 The Candy Cane Mountains - layer upon layer of beauty rise up out of the desert. Photo: Shamil Askerov/Shutterstock.com

Be dazzled by the Candy Cane Mountains

The Khizi district is also to the northwest of Baku, a little over an hour away. We were actually on our way to Altiaghaj National Park when the road took us through the Candy Cane Mountains, and the beauty of it forced us to pull over and go for a spontaneous hike.

Occasionally in the rocks, one can see the fossilized remains of belemnites, a type of ancient squid

The name itself isn’t an official one, though all of the expats here know it by this title, which was first coined by travel writer Mark Elliott in his Azerbaijan guidebook. Most locals don’t actually know the place by a specific name, other than possibly Mushfiq Ev, a reference to the small roadside museum in the middle of the range dedicated to the poet Mikhayil Mushfig.

Expats who’ve been to this area instantly feel like they’re in the middle of a colossal game of Candy Land as the red and white striped peaks of these Caucasian foothills dance out of the ground around them. The formations themselves take their colour from ground water that has oxidized iron within the rock. If you go on a hot summer day, like we did, the desert heat only intensifies the swirl of the scenery but left us wishing for Christmas in July. Cooler parts of the year are much more advisable.

Occasionally in the rocks, one can see the fossilized remains of belemnites, a type of ancient squid. Unlike modern squids, this one contained a skeleton, most notably its bony rostrum, a hard protrusion on the opposite end from their tentacles. Be sure to bring your camera and an extra bottle of water. 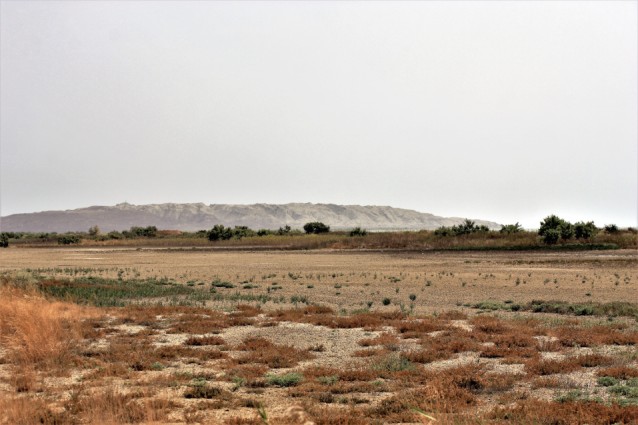 Driving south on the Salyan highway about twenty-five minutes past the town of Alyat, one sees a few lone buildings and a statue of a gazelle perched on the left side of the road. These mark the entrance into Shirvan National Park, home of Azerbaijan’s largest surviving gazelle population. A frontage road allows you to do a U-turn under the highway, and a few hundred yards later, you turn right into the park. After paying a small entry fee (at the time of writing, two manats per person) a local park worker will join your vehicle for a guided safari.

If you’re lucky, you can see jackals, foxes, wolves, and wildcats stalking the park, as well as vipers coiled up among the shrubbery

The land itself is mostly steppe and semidesert, with shrubs and tall grasses waving in the ever-present breeze. A few areas of lake and wetland provide a home to a variety of birds, including flamingos, which can be seen in the fall and winter months. Shirvan is also home to several local rodent and desert reptile species which, coupled with the growing gazelle population, attracts a variety of predators. If you’re lucky, you can see jackals, foxes, wolves, and wildcats stalking the park, as well as vipers coiled up among the shrubbery. Along with the safari, there’s also a lookout station in the park, where you can sit and enjoy tea provided by the park’s hospitality services while observing the savannah from above. Binoculars or a camera with a good zoom lens are a must on this trip. 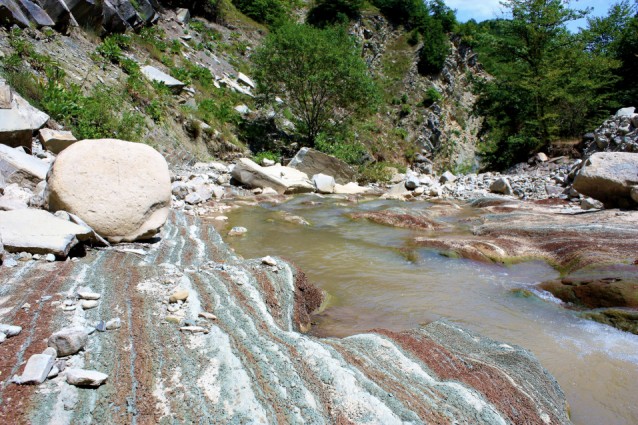 Hike to the Avakhil gorge

North of Shamakhi, just past the observatory in Pirqulu, lies the tiny village of Avakhil. Situated in the Caucasus Mountains, it overlooks the Pirqulu State Reserve and is home to an exotic gorge that only the locals know about.

We followed the course of the main road from Shamakhi until it literally came to a dead end on the south side of the village, and there started asking locals what natural beauties the area offered. We were shown down a narrow cow path through a green field and, keeping to the left on a slight ridge, passed a pond and some trees and came down a grassy bank into a shallow gorge. Grey and white stones, ranging from pebbles to boulders, were strewn about, with little rivulets trickling around them towards a central stream. Along the stream, especially near some of the smaller waterfalls, we found several patches of quicksand. After about one hundred yards, it became impassable due to loose rocks and a waterfall, and we started to turn back, but soon discovered a side trail on the right that led us through the forest to where the real treasure was.

Descending through the trees we came out into a narrow ravine with majestic red, green and grey striped rock formations all around us. The rock walls were worn smooth, especially where the stream bent and butt into them, a reminder of the tremendous power of the water that occasionally floods the area after storms or during the spring thaw. The hiking was a bit difficult, bordering on free climbing in a few spots. We eventually came to a waterfall, about five metres high. It was possible to climb partway down the rocks along one side of the falls, but loose stones kept us from descending all the way. Locals later told us that there was another side trail that would have taken us around to the bottom for a pristine view and a little more hiking. 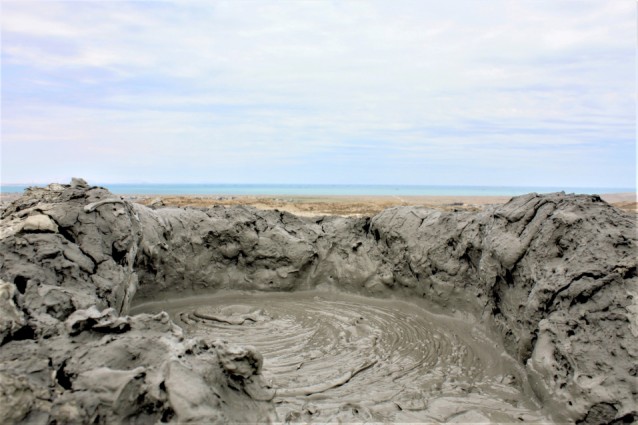 It was hard to resist the urge to get dirty... so we didn't! Aside from being disgustingly fun, locals claim the mud has healing properties. Photo: Rufet Sadiqov

If you head south out of Baku about an hour, you’ll come to the town of Qobustan. Once you get off the highway and exit to the right, you’ll encounter a roundabout. From here, there are two options. One is to follow the brown signs going north to the Qobustan Rock Art Cultural Landscape, a UNESCO heritage site with over 6,000 prehistoric rock carvings. Just beyond this are also a number of mud volcanos, including Boyuk Khanizadagh, Turaghai and Kaniza. The first two hold the titles of the two largest mud volcanoes in the world, with diametres of around 10 km and heights of approximately 700 metres, respectively. Kanzia is visible from the park, but at the time we visited, the road to the volcanos was closed to the public.

Instead, we went back to the roundabout and this time took the road south. After about half a kilometre, the road curves towards a fenced-off area. Don’t follow the curve! There are beautiful rock formations there, but as of our visit they weren’t open to the public. Just drive straight off the road into the desert and you’ll find yourself in a set of well-worn tire tracks running roughly parallel to some power lines and pipelines. After about 12 km, you’ll see a large hill in front of you. This is the volcano. The road curves right around its base, and you’ll soon see a road on your left going up to the summit.

Some people choose to drive all the way up, while others prefer to park their car at the base and enjoy the two-minute hike to the top. Once there, you get the dual treat of a panoramic view of desert mountains and sea, including the Sangachal offshore oil platforms, and dozens of miniature volcanoes dribbling, frothing and popping with cool subterranean sludge. Feel free to both look and touch. You can stay as clean or get as muddy as your inner hedonist desires, so be sure to bring some water and maybe a change of clothes and some plastic bags. 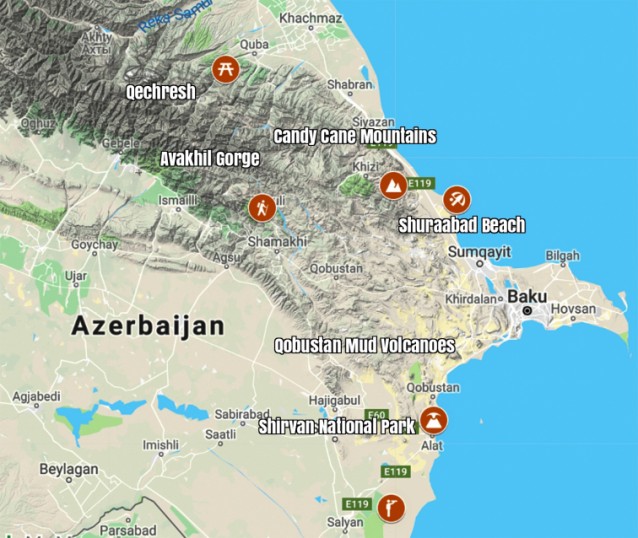