One of the most fascinating things about working at a magazine is finding stories, and Azerbaijan has proven time and again to be a great source of interesting, surprising and extremely readworthy material. Sometimes we don’t even need to search for these stories. Instead, they find us. 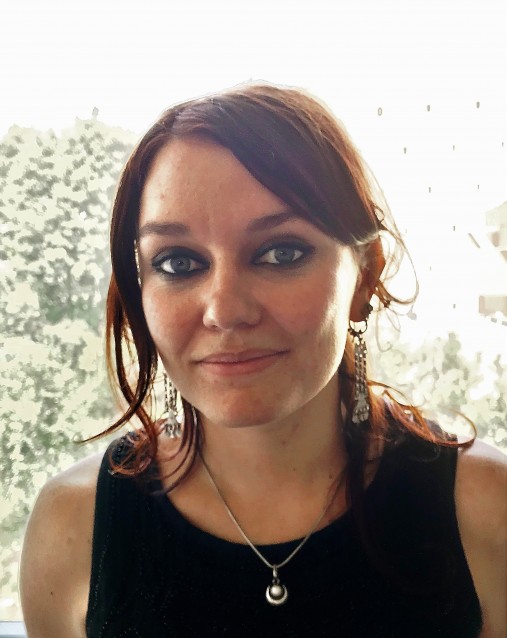 Not long ago Visions received an enquiry about Pir Huseyn Khanegah, a 13th-century shrine and caravanserai complex near the town of Hajiqabul which was previously covered by our frequent contributor, travel writer Mark Elliott, in his article The Pir Huseyn Khanegah. But Anais Leone, a 28-year-old PhD student from the south of France was looking for a little more than a travel article. Working under the supervision of Professor Yves Porter at Aix-Marseille University, Anais is studying the links between ceramic tiles and architecture during the Ilkhanid period (1256-1335 Ad), focusing on the techniques used in the production of lustred ceramics. These ceramics were used both for luxury wares and in architectural decoration before and after the Mongols’ invasion of Persia. When Visions learned about her thesis on lustre decorated shrines during the 13th and 14th centuries, we didn’t want to miss the opportunity to ask Ms Leone more about her intriguing research.

VoA – What is your area of study?

AL – I am completing my third year of doctoral research on the subject of monuments, which are an integral topic in my studies, and the most exciting part. My studies allow me to live my passion for history, art and travel all at the same time. I am also teaching Islamic art and architecture in my university in France. In addition to doing research, it is also fundamental to transmit this knowledge to a new generation of students and give them a broader perspective.

My studies allow me to live my passion for history, art and travel all at the same time

As my studies are focused on medieval Persia during the dominion of the Mongols (13th-14th centuries), they are looking at a geographical region that includes parts of modern day Iran and Azerbaijan. Lustred ceramic tiles were produced in workshops in Kashan (in central Iran). Investigations have shown very interesting examples of artistic diffusion and commercial exchange during those centuries. It is very important to understand the connections between medieval territories, which extend beyond current national borders. I have already travelled within different regions of Iran to visit shrines from the Ilkhanid period, but I need to enlarge my research outside of Iran’s borders in order to reconstruct a broader and more complete vision of this subject. 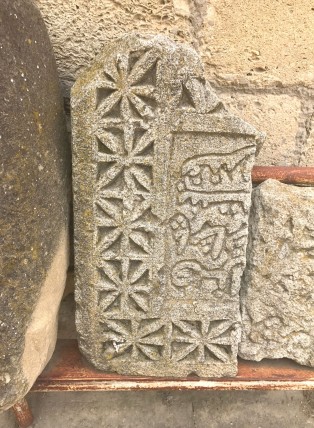 Original carved rocks on display in the inner yard of the complex. Photo: Camilla Rzayeva 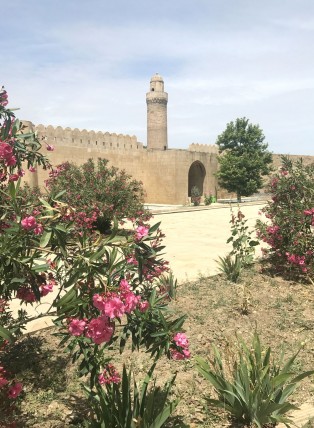 What is the project that brought you to Azerbaijan and how did you hear about Pir Huseyn Khanegah?

My current research is part of my PhD thesis entitled Shrines and Lustred Tiles in Ilkhanid Iran (1256-1335). Pir Huseyn Khanegah is an important building in regard to this topic, and it would have left a gap in my studies had I not come to Azerbaijan to visit this site.

It is very important to understand the connections between medieval territories, which extend beyond current national borders

Pir Huseyn Khanegah has some significant mentions in its historiography. In 1858, Ivan Bartolomey, a Russian numismatist (someone who studies coins, money and related objects – Ed.) described the different elements of the Khanegah, mentioning the impressive lustred decoration inside the tomb. Smbat Ter Avetisian, an Armenian archaeologist, took photographs and made some sketches and descriptions of the monument and its inscriptions in 1907. After that, the Russian art historian Vera Krachkovskaya began a very interesting work about these tiles, part of which is now preserved at the Hermitage Museum in Saint Petersburg. The Pir Huseyn Khanegah is also among the monuments with lustred decoration listed in a reference publication (Persian Lustre Ware) by Oliver Watson.

I thought my best option was to come, collect data directly at the site so I could include new information on this monument in my research. I would like to complete my fieldwork on this monument by studying the Hermitage Museum collections. First I will look at the actual monument, and then at the tiles (in the Hermitage Museum), which will allow me to reconstruct the link between the two and understand how the pir must have originally been decorated.

What were your impressions of the pir?

There is a very special and peaceful atmosphere inside and around Pir Huseyn Khanegah. This is a characteristic feature of Sufi shrines, which are often located in quiet and contemplative areas. 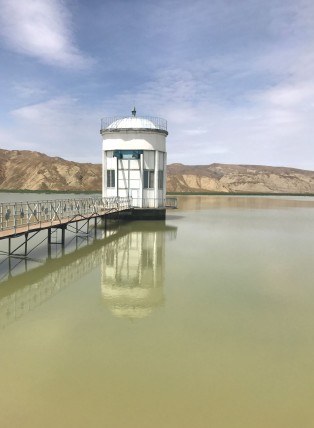 A reservoir nearby that almost looks like a lake. Photo: Camilla Rzayeva 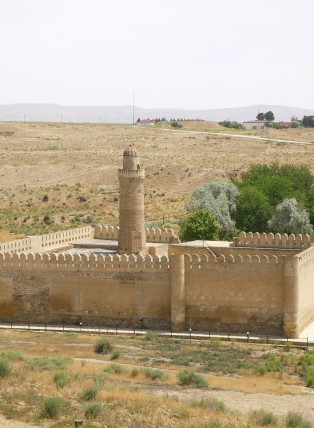 View of Khanegah from the nearby reservoir. Photo: Camilla Rzayeva

The pir is well preserved and has been restored, so in general the building is still impressive. Inside the Khanegah there is now no trace of the former lustred elements, but it is part of my work to try to reconstruct how the wonderful original decoration could have been.

The structures of the pir stand in two parts, one being a fortress and the other a minaret, both of which are masterpieces of the architecture of this period. In the courtyard there are also beautiful engraved friezes and tombstones from successive historical periods.

I was very glad to visit the pir and could see that the unity of the different parts of the architectural complex is still present.

Did the Khanegah meet your expectations? Were there any surprises?

Honestly, I didn’t really know what to expect about the current state of the pir, so it was a very good surprise to see that almost every part of the building is still intact.

There is a very special and peaceful atmosphere inside and around Pir Huseyn Khanegah. This is a characteristic feature of Sufi shrines, which are often located in quiet and contemplative areas

It was also interesting at the entrance of the Khanegah to see some photographs of the original frieze which is now preserved in the Hermitage Museum. Usually at the other shrines I have visited for my studies people have no idea about the former precious ceramic decoration of the building. This is a good way to keep the memory of the glorious past of this monument alive and share it with visitors.

There is also an interesting exhibition of items found during archaeological excavations of the site. This helps build a bridge between the current building and the story of its distant history. It was a very good surprise to see that the link between the monument and its precious ceramic adornment is not completely broken.

What would you say was the most exciting part of your visit?

Considering my studies and my personal interests, my entire trip to Azerbaijan was fascinating. 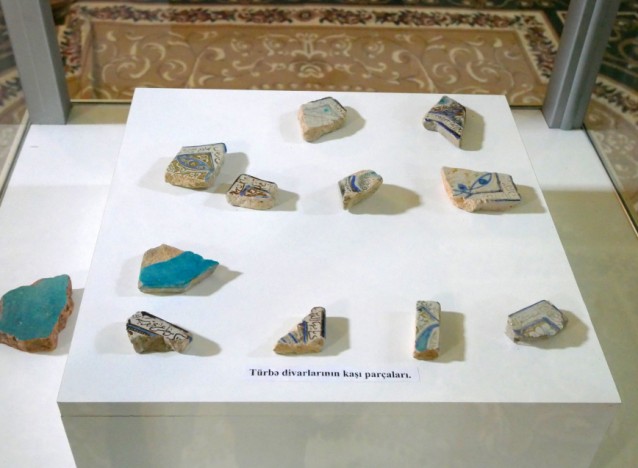 For my thesis work, I saw very interesting lustred tiles from the Pir Huseyn Khanegah and other monuments in Azerbaijan at the Nizami Museum of Literature in Baku. The museum collection also preserves the original stucco mihrab of the pir. Even though this mihrab is made of a different material than ceramic, it is still a very valuable piece in understanding how the original decoration of the Khanegah might have looked. Of course, I had a wonderful time during my visit to the pir. It was also very interesting to talk with the passionate guide to the monument. And besides my studies, I discovered a very attractive city and dynamic people in Baku. The link between the past and the present is fascinating in Azerbaijan. It’s a unique mix of tradition and modernity.

How much more work do you have left until the project is finished? What other countries (and where within them) are you planning to visit next?

I am starting my last year of doctoral studies this September. It will be the beginning of the final stage of my PhD thesis. I will be working on all the data I collected during my visits and that I learned in my book research. I plan to submit my final work at the end of 2019. before this deadline, I must finish my work in Iran. I already visited monuments in central Iran and Khorassan in 2016. Next I must work on monuments in Iranian Azerbaijan: the old Ilkhanid capital of Maraqeh, Abaqa palace at Takht-e Solei-man, the mausoleum of Oljeitu in Soltaniyeh, monuments in Tabriz etc. I will also visit the ancient city of Qalhat in the Sultanate of Oman. This site is currently being excavated by a French archaeological mission and some lustred Ilkhanid tiles were also found there.

Besides gathering data directly on monuments, I must visit some museum collections. I also plan to visit the Hermitage Museum in St Petersburg, where they are preserving a very large and interesting collection of Ilkhanid lustred tiles, some from the pir Huseyn Khanegah.

What will your final project look like? You mentioned that there’s going to be a 3-D reproduction as well, tell us a little more about that.

My final work will be my PhD thesis in several volumes. The written part will consist of descriptions and analyses. There will also be a catalogue of the lustred tiles, and in appendices there will be photographs, diagrams, and a 3d view and photographic reconstruction. The written part is more academic, but I would like to also produce some documents and diagrams which could be reused in museums or monuments to describe the original condition of these monuments. 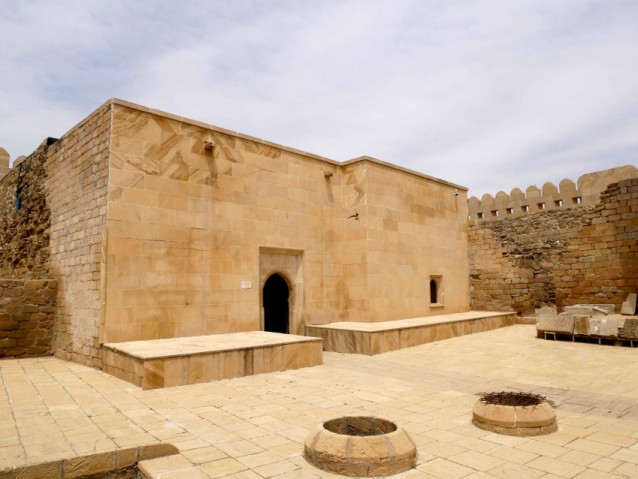 Ancient wells and an entrance to a now-flooded part of the complex. Photo: Camilla Rzayeva

In my research, I try to focus on monuments which are, for the most part, lacking their original adornment and whose tiles are preserved in collections around the world. It is not obvious to visitors who see the current state of these monuments what the original decoration was like. In my previous research, I made some 3d and photographic reconstitutions for the Sufi shrine of ‘Abd al-Samad at Natanz in Iran. It was an interesting new plan for this topic. It helps non-specialists to visualize how the former decoration may have looked, and it is also a good foundation for future studies of these monuments. I am working on these reconstructions with my partner Alexandre Kiriakides, who assists me in all my field explorations. we will propose 3dreconstructions of the original lustred decor for the Pir Huseyn Khanegah. I think it would be interesting for visitors to the site. 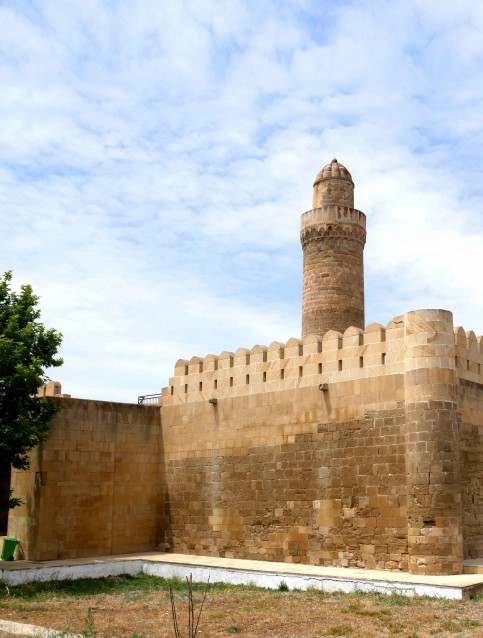 What were your overall impressions of Azerbaijan and the Azerbaijani people?

I have been captivated by Azerbaijan and the Azerbaijani people. I was very surprised and honoured by the peoples’ interest in my research. Everyone I met during this trip was very welcoming and helped me; it was very pleasant to study here. I would like to express my gratitude to Visions and Azerbaijan, especially to Camilla Rzayeva who organized everything for my visit to the pir and during my trip to Azerbaijan.

I found a very interesting country with strong traditions and cultural heritage. I also fell in love with Azerbaijani food, which is a wonderful mix of flavours. All my impressions are positive, and I look forward to coming back soon to see more of the country.

Definitely, conducting my research in the Pir Huseyn Khanegah was a very exciting moment and I had a wonderful welcome at the site. I wish I could have travelled to other areas in Azerbaijan, but for sure, whether for my research or for my own personal interests I will come back to this wonderful country. My only regret was that I did not have enough time to visit different areas of the country. There is so much to see and study in Azerbaijan!

211340
LiteratureAutumn 2018
Ali and Nino: Love at the Crossroads
by Kate O'Donnell