Zigh Salt Lake: The Eighth Wonder of the Absheron

Some time ago I wrote an article for Visions called 7 Secrets of the Absheron (see the Spring 2017 issue), exploring the Absheron peninsula through its little-known historical relics, cultural curiosities and unusual landscapes. But that was before I discovered (and began to frequent) a therapeutic salt lake in Zigh, which simply must be added to that list.

Summers in Baku are extremely hot which causes a natural migration towards dachas (country houses) and beaches all along Baku’s Caspian Sea coast. Walking along beaches in areas like Mardakan, Bilgah and Buzovna is a unique cultural experience – old Soviet cars sit quietly by the water’s edge and families tuck into juicy watermelons on rugs laid out next to steaming samovars. But summers here aren’t all about the beach.

Equally popular with Baku’s sun seekers is a natural wonder in Zigh, a district of high-rise stalinkas (Soviet-era housing) set dramatically atop a hill running impressively down towards the Caspian. Near the sea is an area of dachas and a salt lake with legendary healing powers.

But like many of Azerbaijan’s local curiosities, search online and you’ll find almost nothing about it. Knowledge of the lake’s balneotherapeutic qualities is passed on by word of mouth among native Bakintsi (Russian word for Bakuvians – Ed.) and, although the area attracts health seekers from Russia and other parts of the CIS, they invariably have local roots or connections. But far from everyone is convinced of its health benefits, so I was keen to find out. 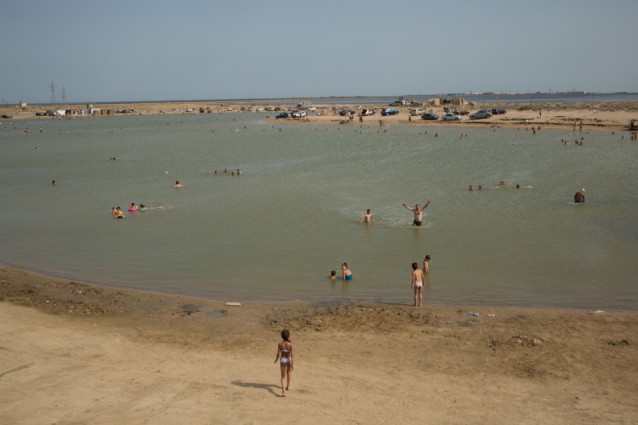 General view of the lake in mid-summer. Photo: Tom Marsden

Health or hazard?
As his taxi whistles along the Zigh yolu, Rahman, originally from Ganja, tells me that he personally has benefitted from the lake. Having managed to cure a skin irritation on his hands, he’s now a firm fan: God gave us this place, he says rather dramatically, alluding to its mystical powers. To back it up he recounts a story of how two entrepreneurs had made separate attempts to privatise the lake in the early 1990s and mysteriously ended up dead.

The lake did, however, end up in someone’s hands. As Azerbaijani refugees from Armenia arrived in the area during the conflict over Nagorno-Karabakh, they began operating small teahouses and extracting an entry toll (50 qepiks), both of which still exist.

Not far from one of these teahouses, I approach a figure looming by the water’s edge, wearing what looks like a wetsuit with a hood, but which on closer inspection is actually ink-black mud. He says that he’s come from Russia, that he was a sportsman and that the mud and water make him feel younger.

Directing my attention a few metres back to two old bathtubs, I notice that one is filled with red goo and the other with a jet-black sludge. Both are mud extracted from the bottom of the lake by local workers each day and form a crucial element to the health procedure. The former is high in iodine and supposedly treats the skin while the latter is thought to contain oil extracts similar to naftalan and is used to ease aches and pains.

Further along the shore I meet a local man, Aydin, who stands with a beaming smile and covered from head to toe in mud. His companion, another Azerbaijani living in Russia and visiting relatives, is a little less enthusiastic, telling me quite honestly: I don’t know whether it heals or not; the most important thing is having faith.

Indeed the lake’s reputed health benefits are the subject of much debate. While many stress that the abundance of minerals found in the water and mud allows treatment of joint pains such as arthritis and rheumatism, as well as skin diseases, others say that the lake is polluted by wastewater and is in fact a health hazard. Nevertheless, this doesn’t stop flocks of sun seekers from congregating here during the height of summer. 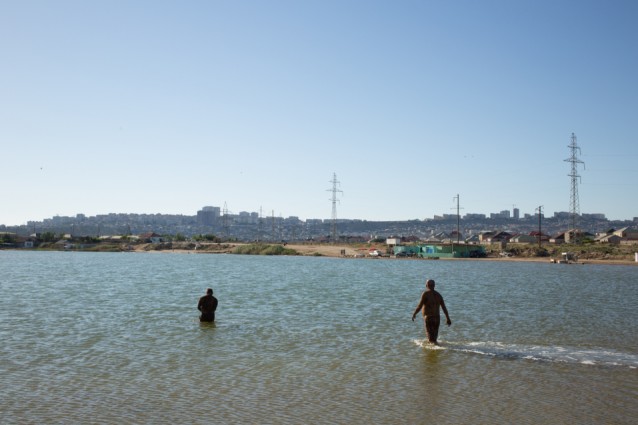 Testing the waters
I’m eager to try the procedure myself. Aydin explains that I should bathe in the water for 10 minutes before applying the mud. So I wade in, gently let myself go and ... whoa! A very odd sensation – I float... or semi-float, as though supported by a poorly inflated lilo. Stranger still is trying to swim. Spotting two women floating in the distance, I paddle over awkwardly, using a stroke resembling a sort of semi-submerged doggy-paddle.

Both are local Bakuvians and ardent believers in the lake’s properties: Some doctors recommend it if you have joint pains, one says, adding: The concentration of salt used to be much greater, you’d come out with a layer of salt all over your body.

When exactly the healing properties of the lake first came to prominence is unclear, but several bathers tell me that they have been coming here for 20, 30 or, in one case, 40 years. Back then, the lake was bigger and allegedly safeguarded by the military (a little research reveals that the Kirov Naval Institute was located nearby), whose servicemen regularly bathed in the lake.

In Soviet times, oil was also being extracted from the area around the lake, the legacy of which is a few neglected rusting drills and a Martian terrain that feels almost spongy to walk across. In fact, the bizarre scene resembles something of a battleground between oil and salt, the Absheron’s two great natural resources. As the former has held sway since the late 19th-century oil boom, the Absheron’s many salt lakes have largely been forgotten, despite the fact that the largest of them, lakes Masazyr and Boyuk Shor, were producing salt on an industrial scale until the early 20th century.

While salt continued to be industrially produced elsewhere in Azerbaijan – in Nakhchivan – during the Soviet period, the Absheron’s salt lakes might have been developed into resorts and sanatoriums, but preference was given to places like Pyatigorsk and Kislovodsk. Instead the Absheron was exploited almost exclusively for oil, which polluted the lakes and left their industrial and tourist potential largely unrealised. Some sources cite the commercial success of the Dead Sea by comparison. 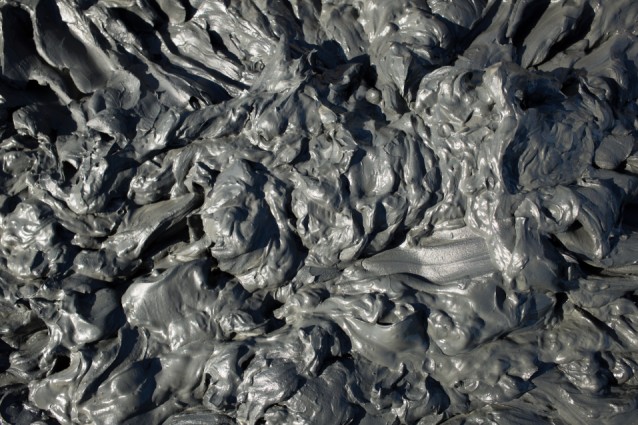 The mud is extracted from the lake daily and used therapeutically. Photo: Tom Marsden

On my return to the water’s edge Aydin encourages me towards the mud. He says the two sorts shouldn’t be mixed so, instinctively steering clear of the (infra-) red, I opt for the dark tub instead. Worth mentioning is that each use of the mud costs 50 qepiks, as does parking, use of showers and changing booths.

The mud is incredibly thick and gooey and dries quickly in the sun, forming what feels like a tight caste around the body. This then tightens ever further to the point of cracking, making one feel like a snake shedding its skin. It’s an oddly pleasant sensation but, while I do feel my muscles relaxing and pores being soothed, I’m equally aware of the mud’s terrible stench: You’ll need a shower later on, says Aydin, underestimating the situation – in fact you’ll need two or three!

A week after I first bathed, my toes began to wiggle

Around the lake I continue to meet many other lake-goers, whose stories often prove to be extraordinary. A great example is Yasha, who looks to be in his mid-60s, stylishly dons a cowboy hat and is one of the area’s greatest advocates. He explains that his connection with the lake actually began in Murmansk, a city in the Russian Far North. That’s where he was sent to complete his Soviet military service, but temperatures plummeted so low that he returned south with frozen shins.

Yasha recounts that for many years he needed injections to keep him mobile, until one evening he and his friends drank far too much tutovka – a very strong form of homemade vodka. It was so potent that the following morning he woke up and couldn’t move his legs: The tutovka obviously disagreed with the injections, he reflects. Visits to doctors and hospitals followed, but eager to avoid forking out huge sums for specialised treatment, he instead took the advice of a 96-year-old neighbour who suggested bathing at the lake for all of 50 qepiks.

A week after I first bathed, my toes began to wiggle, he recalls with great excitement, now able to walk normally again. 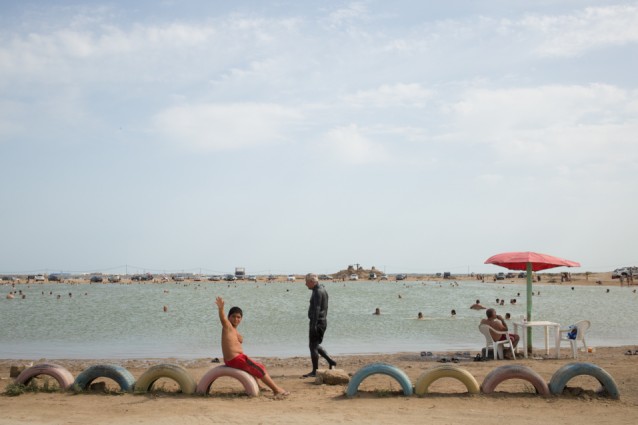 Lakeside view in the middle of summer. Photo: Tom Marsden

Bathing in iodine
I return to the lake several times throughout September, while temperatures are still high and the coast continues to attract trickles of sun worshippers. And over time I begin to recognise the same faces – a community of low-cost health seekers enjoying the last of the summer. One of them is Rafig, a man I’m eager to speak to given his medical background.

I find Rafig at the “iodine lake,” regarded by the regulars as the real health booster, as opposed to the main lake, which is considered more for relaxation. Yet as I look down at these two uninviting pools carved out of the chemically orange mud, I struggle to really see how they could possibly be therapeutic. Rafig enlightens me about the health benefits:

It strengthens the immune system, fully treats the nervous system... The composition of haemoglobin depends on iron. There is a lot of haemoglobin [here], it immediately breathes life into you. After sitting here for half an hour you begin to have a desire for everything and become interested in life, because haemoglobin is the foundation of blood circulation.

So I sit and float and hope for an epiphany. In truth, the simple act of floating is extremely relaxing and puts my mind completely at rest... until a man named Gabib wades over and interrupts my meditation to wax lyrical about urine therapy.

Another extraordinary bather is a man from Nakhchivan called Agha, whose soft coppery skin radiates health and energy. One wouldn’t believe that 20 years ago, however, he was diagnosed with kidney cancer and that doctors in Azerbaijan and Russia had given him just two years to live. In response, Agha says he came up with his own holistic healing regime and miraculously healed himself over a period of four years. His treatment revolved around a diet of fruit and nuts, taking hot and cold baths, praying and doing gymnastics.

But also crucial to his recovery was the lake, where he would absorb vitamin D from the sun as well as benefiting from the water’s special properties: There are 32 elements from Mendeleev [Periodic Table – Ed.] here. It’s our miracle. Allah created this for us, he says passionately. 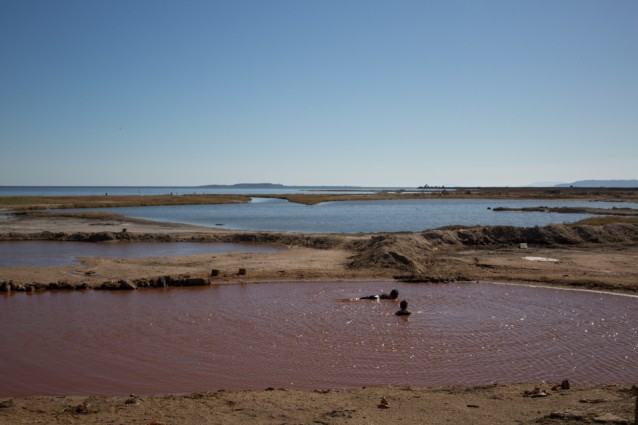 Two smaller pools nearby are thought to contain water with high concentrations of iodine as well as other elements. Photo: Tom Marsden

The point about the 32 elements is a recurring comment, but for me Agha’s story clarifies something else – that rather than possessing any biblical healing powers, visiting the lake is part of a broader healthy way of life. Beyond floating in the water and treating one’s skin with pungent mud, bathers enjoy spending time in the sun, conversing with family and friends and exercising around the lake. All of this together, it’s healthy, everything together – the air, water, the sun, everything, Rafig says.

And I can see his point. I don’t believe the lake’s mysterious properties will miraculously cure all my problems, but I do feel liberated by the sensation of floating effortlessly across the water and the softness of the mud against my skin. I enjoy the freedom of not taking myself too seriously, meeting the lake’s unusual characters and making some new friends.

As opposed to more luxurious resorts elsewhere on the Absheron, the salt lake at Zigh breathes simplicity, warmth and hospitality... with some wacky treatments thrown in.