At 1,800 metres above sea level, Saribash is one of the highest villages in the north of Azerbaijan and the highest in Qakh. But while similarly remote settlements like Khinaliq and Lahij get all the attention, Saribash has remained largely off the travel radar, despite the fact that it also boasts great tourism potential. Having only covered it once, Visions is equally guilty, especially since Fiona MacLaughlin’s 2008 article, “Three Mountain Villages,” remains one of our most popular. All in all, we felt it was well worth another visit. 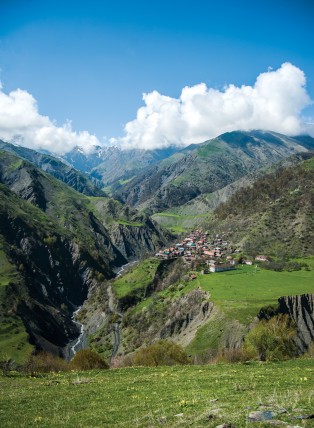 The best view of Saribash’s scenic setting is from the slope of a neighbouring mountain. Hiking to this spot takes about an hour. Photo: Eldar Farzaliyev 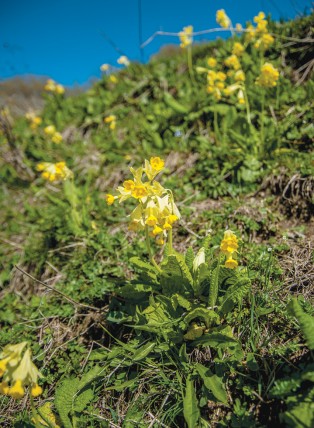 According to one legend, the name Saribash (Yel- lowhead) may originate from these flowers which bloom across the mountains surrounding the village. Photo: Eldar Farzaliyev

Saribash literally translates from Azerbaijani as “Yellow-head” (sari – yellow; bash – head) and the name itself is perhaps the first thing to grab one’s attention. According to local villager Sirajeddin Ahmedov, there are a couple of legends about how this strange name came about:

There is a yellow flower that grows in the mountains in spring. This yellow flower you can see everywhere [...] According to one legend, the name of the village comes from that. According to another legend, Muslim armies came to these places and passed through this village. So a yellow turban was put on the head of one of the military commanders. According to this legend, hence the name of “Sari Sarikhlilar.” They tied a yellow ribbon around his head.

With little written documentation about Saribash’s ancient history, our trip becomes something of an exercise in recording oral history. No one is quite sure of the village’s roots, although the answer may lie in another of its many legends. According to this, Saribash was preceded by other, more ancient, settlements. 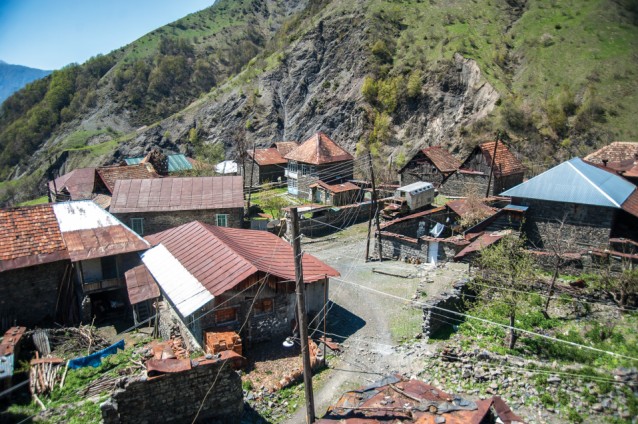 One [of them] down below was the village of Eski, says Sirajeddin. This is how it’s referred to in historical documents – Eski village. And the other village was there, up that hill. It was an Oghuz village and there were Oghuz graves in its cemetery until 50-60 years ago. It’s still possible to find that cemetery there now. So the legend goes that the second village was established there. The first was the village of Eski [...] and the third village, the village of Saribash, was established right here.

Today’s Saribash has reportedly existed for some 200 odd years, which means it probably came into being under the Ilisu Sultanate in the pre-tsarist period.

People in those days would come to such places in order to protect themselves from attacks and raids. They would come to mountainous places. According to beliefs, this is how this village was established, Sirajeddin tells Visions.

Even today the defining feature of Saribash is its remote location – just several kilometres south of the border with Dagestan and 7 km north of Ilisu, Qakh’s last well-connected village, famous for being the former capital of the Ilisu Sultanate that ruled this area for a few hundred years up until the Russians seized it by force in 1844. You can still see evidence of that struggle with tsarist forces on the way to Saribash: look out for the semi-collapsed stone wall of the remains of a Russian fortress overlooking the Kurmuk River to the west of Ilisu. The fortress points towards the mountains to the north and must have served as a defense against Sheikh Shamil, the legendary Caucasian leader who resisted Russian attempts to take these mountains for over 50 years.

The initial stretch of the road to Saribash isn’t too bad, until we come to cross the Kurmuk again, only this time without a bridge – for this you’ll need a Soviet-era Niva or, as in our case, a jeep nicknamed the “UAZ” (pronounced “Ooo-az”). Our UAZ descends impossibly into the river and ploughs through the narrow, metre-deep stretch, emerging on the other side like a tank clawing its way from a trench. 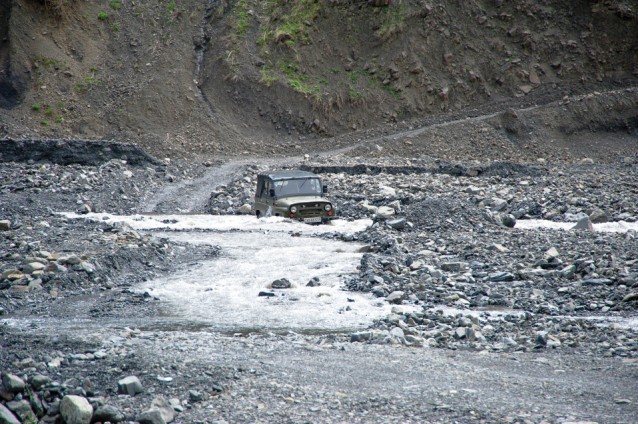 Our jeep powers through the Kurmuk River, which is the main obstacle to reaching Saribash. Photo: Eldar Farzaliyev

And here we begin to feel a completely new remoteness to our location. It’s unsurprising to hear from our driver Ismet that there’s a short space of time, generally in early June, when the water level is too high, leaving Saribash completely cut off.

A little further along the road we turn a corner and the village appears perched picturesquely atop a plateau in the distance. 17-year-old local boy Rustam Mirzoyev is already there to meet us. His mother, Guleser Mirzoyeva, welcomes us with tea, jam and sweets – the wonderful welcome that awaits all travellers to the Caucasus Mountains – which we share with local villagers Galib Aliyev, and Kazim and Mahmud Azimov, who relate their memories of life in the village. Its modern history, we quickly discover, is dominated by one theme – migration.

Our collective farm was awarded the Order of Lenin. It was known all over the republic

Before the Soviets collectivized the land in the 1920s, as they did throughout Azerbaijan, local people made a living as farmers working for local beys (land-owning aristocrats) and as craftsmen. But Saribash experienced a new lease of life under the Soviet system, when it was home to a very successful kolkhoz (collective farm) named after the 26 Commissars which employed about 300 workers: 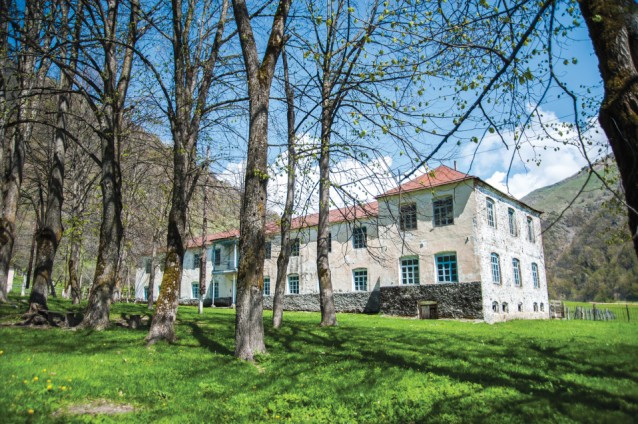 The former school building that in its heyday hosted up to 400 pupils. Photo: Eldar Farzaliyev

Over 25 years on, there are still several interesting Soviet reminders – a grand statue of a choban (shepherd) looking down the valley towards Ilisu, as well as a serious-looking soldier standing side by side with a young girl. There’s also a small neglected fountain and the large boarded-up building that was the school, both adding to the village’s somewhat ghostly feel.

The school is a particular sore point: it closed last year due to a lack of pupils, yet Kazim says that when he began the first class in 1961 (the school opened in 1954), there were a little less than 400 in total, enough for A, B and C streams for each year.

Listening to local tales of life at that time, one imagines a village teeming with life. Things were easier then: a well-oiled collective farm meant plenty of work and state-provided dairy products. There were at least seven people to a family, according to Kazim. In 1949 the region’s first electric power station was built in the valley next to Saribash, meaning that this far-flung village had a reliable electricity supply before Ilisu or Qakh.

From the villagers’ recollections the first signs of change were in the 1970s when the government began to encourage resettlement from the mountains. But 20 years later the situation really deteriotated when the collective farm stopped operating after the fall of the USSR. Graduates began returning from universities and colleges in cities like Sheki, Ganja and Baku to find that there was no work. It became difficult to live and so people began to move, Galib sums up.

We hear slightly differing estimations of the population decline, the general thrust being that at its Soviet-era peak there were in the region of 250 houses and 1,500 people, whereas today only about 30 people live in the village in winter. In summer, however, the number rises to about 100 with returnees from towns and cities. August is apparently the best time to witness local culture and customs, says Mahmud, after I mention watching a video lauding music and poetry from Saribash (who wouldn’t be tempted to write a poem or song surrounded by such natural beauty?). 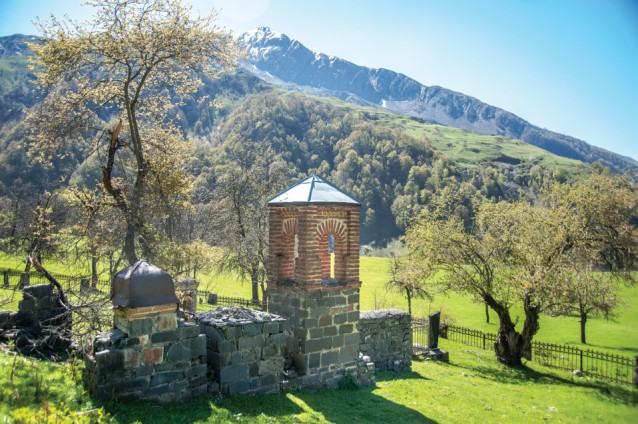 The other obvious contributing factor to the heavy migration is the village’s inaccessibily – The road torments us, says Galib. Many have moved to the village of Jelayir about 45 km to the south, founded by migrants from Saribash, while others have gone to the regional centre of Qakh and still others have moved much further afield. Mahmud says there are people from Saribash in Russia, Europe, the UK and even America. The village is dying, he says frankly, which is sad given its spectacular setting at the heart of the Caucasus Mountains; with a little effort at regeneration, the tourism potential seems massive.

At 6.30 the following morning we accompany young Rustam Mirzoyev as he takes the cows out to graze on a neighbouring mountaintop. Featuring a couple of tricky river crossings and some steep and slippery slopes that have us scrambling on all fours, it’s a gruelling walk for such an early start, even if Rustam seems to take it all in his stride.

As it happens, it’s 1 May and the first time the cows have left the shed since last November. Given that there are about 50 cows in the village and Rustam’s family owns 12 of them, it’s his responsibility to lead them out on 12 in every 50 mornings until the first heavy snow falls in about early November.

The clear bonus to this early morning march is an excursion into the mountains. The peaks here are a habitat for mountain goats, bears, gazelles and wolves, the latter being the biggest pests because it’s illegal to hunt them, even when they creep into the village and steal livestock. These mountains are the stuff of legend, quite literally –

All the mountain names come from the Dede Qorqud epic. They have purely Turkic names. The mountain in front of us is called Alagoz [Azerbaijani for “grey-eyed”]. This is Garshidag, this is Gunakhay, Gochyatag, but the other side of the mountains, the peaks that fall on the territory of Dagestan, are not Turkic. This is why it is considered that this is a purely Turkic place, an ancient place. It is the Oghuz land of Saribash... explains Sirajeddin (contrary to some media reports suggesting the village’s roots are Lezgin or Tsakhur). 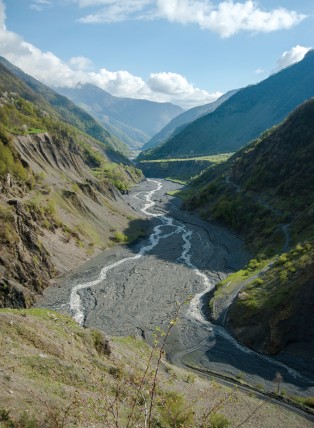 The Kurmuk River flowing down towards Ilisu and Qakh. Photo: Eldar Farzaliyev 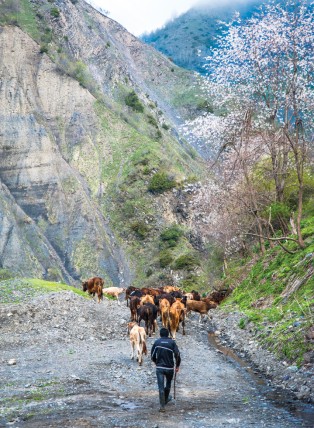 17-year-old Rustam Mirzoyev takes the village cattle out to pasture for the first time this year. Photo: Eldar Farzaliyev

As a way of saving Saribash, the villagers have apparently put forward the idea of turning the area into a ski resort. And standing on the mountainside across the valley to the east, it’s easy to see why: the village is nestled picturesquely on a plateau which receives the best of the daytime sun and seems a natural meeting point for any descent from the area’s dramatic ensemble of mountains.

It would certainly be great if our state could provide this place with some assistance and develop tourism, says Sirajeddin. For the moment, however, any thoughts of mass tourism seem a long way off. Walk around the village at night and you only see a few lights on. It’s quiet enough to hear the light gushing of a waterfall across the valley. Despite the difficult road and unrelenting migration, surrounded by such simplicity and serenity it becomes clear why there are some villagers still committed to building a future here.  Among them is our host Guleser, to whom at one point I suggest that local life must be hard: Not at all, she says in her usual cheerful tone, we have everything we want.

Even so, in our first and only article to feature Saribash 10 years ago, Fiona Maclaughlan described it as “The forgotten village” and today this still rings very true. And I echo her thoughts a decade later that with attention and investment Qakh’s highest village would be more than a match, in touristic terms, for Khinaliq and Lahij.