20 January - a Day of Mourning in Azerbaijan 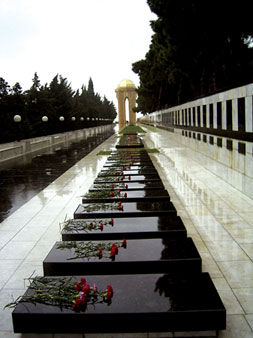 What happened on 20 January 1990 was an act of terror by a totalitarian regime. The crime committed against the Azer-baijanis is, in fact, a crime against mankind, against humanity.

The people were infuriated by the territorial claims and aggressive acts of Armenia, backed by the then Soviet officials, against Azerbaijan, as well as by the anti-nationalist behaviour of the local authorities. Azerbaijanis were being expelled from the land where they had lived for centuries. Since 1988 the national movement for liberty grew. This was a protest against the policy of the USSR and, as a result, for the independence of Azerbaijan. Thousands of people protesting against the policy of the USSR held demonstrations all day long in the central square (now Azadliq or Freedom Square) and the streets of Baku.

On 18 January 1990 the Presidium of the Supreme Soviet of the USSR issued a decree "On the realization of the extraordinaty situ-ation in the city of Baku since 20 January", which had not been co-coordinated with the parliament of Azerbaijan and the purpose was to choke the people’s voice, to stop the demonstrations and the movement. Later on the night of 20 January a big contingent of the USSR Armed Forces was sent onto the streets of Baku. As a result, the Soviet Army committed a horrible crime against the Azerbaijani people. That night the Soviet Army displayed particular cruelty against the people. They remembrance used chemical weapons, shot at ambulances and the wounded and mutilated dead bodies. According to official sources, as a result of this aggressive act, which was against the principles of international law, democracy and humane values, 131 people died, 774 were wounded, 400 imprisoned and four went missing. During the tragedy the courageous sons of the Azerbaijani people who stood up for the motherland’s dignity, honour and freedom became martyrs. The day after the tragedy, despite the pressure of the Soviet Army, people on the the streets displayed their hatred both for those who had enforced the clampdown and for the Communist Parties of the USSR and Azerbaijan. On the night of the tragedy, the leader of the republic, fearing the people’s anger, escaped to Moscow. Azerbaijanis living in Moscow arranged a meeting about the tragedy. At that time Heydar Aliyev was living in Moscow and he came to Azerbaijan’s permanent representation and presented his condolences to the people of Azerbaijan. In a speech he emphasized that the initiators of the tragedy were the then officials of the USSR and Azerbaijan and they had done nothing to calm the people down. Heydar Aliyev, who considered this tragedy a crime against the Azerbaijani people, emphasized that the initiators 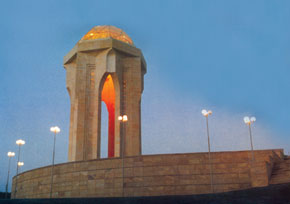 Martyrs’ monument, Baku
bore responsibility for it and should be properly punished.

The Azerbaijani people buried the martyrs, who perished on 20 January for the independence of the country, in the Mountain Park, the highest spot in Baku. Since then this place has been called Martyrs’ Avenue and people mark 20 January as a National Day of Mourning. The Martyrs’ Avenue is a most sacred place for every Azerbaijani. Every year millions of Azerbaijanis visit Martyrs’ Avenue and lay carnations on the graves. This ceremony begins in the early morning when the president of the Republic and representatives of foreign countries lay wreaths at the eternal flame. Traditionally the head of state, accompanied by guards of honour, approaches the monument erected to commemorate the martyrs, lays the wreath, bows and keeps a minute’s silence. Then officials of the diplomatic corps, dignitaries and martyrs’ relatives offer their condolences to the president.

The Azerbaijanis visit Martyrs’ Avenue until midnight. All national TV channels broadcast directly from the Avenue. On that day all tube stations and public transport to Martyrs’ Avenue operate free of charge in order to allow the crowds to move freely. According to official protocol, every guest or delegation paying a visit to Azerbaijan begins their journey by visiting the Avenue.

The Azerbaijani people named a tube station after 20 January, near the place where the tragedy occurred (before this the tube station was named after the 11th Army that committed the atrocity). The interior of this station reflects compositions by well-known Azerbaijani artists, who painted various scenes from the tragedy, and red carnations, the symbol of 20 January. That day the tube station of 20 January and nearby streets, pavements and walls, which were riddled with bullet holes where civilians were shot en masse, are covered with pink carnations.

On 20 January 1990, though the Azerbaijani people suffered military, moral and political aggression, they displayed their ability to maintain the traditions of historical heroism and resist the cruellest attacks for the sake of the freedom and independence of the motherland, even becoming martyrs. The sons of the motherland perished on 20 January 1990 while defending the freedom and independence of Azerbaijan and by their bravery made a vivid history in the chronicle of heroism of our country. And today the Azerbaijanis are proud of those who are ready to perish for the sake of the people’s national identity. On 20 January Martyrs’ Avenue looks like a sea of carnations, but from a distance the image is horrifying.

59830
CultureSpring 2016
The Novruz Tuesdays
by Tahir Shahbazov
more
SURVEY
Which subjects are you looking for on this website?
24%Arts & Culture
12%Food
34%History
6%Sport
25%Travel & Tourism
Number of votes: 699
VIDEOS