Sheki is an ancient Silk Road city of 68,000 in northwest Azerbaijan. In 2017, it was included in the global UNESCO Creative Cities network for the serious cultivation of its various handicrafts and folk art. But Sheki also has a lighter side: it is well known for its humour, one of the aspects cited by TURKSOY (The International Organization of Turkic Culture) when it selected Sheki as the Cultural Capital of the Turkic World in 2016. Visions recently visited Sheki to explore this reputation as the humour capital of Azerbaijan. 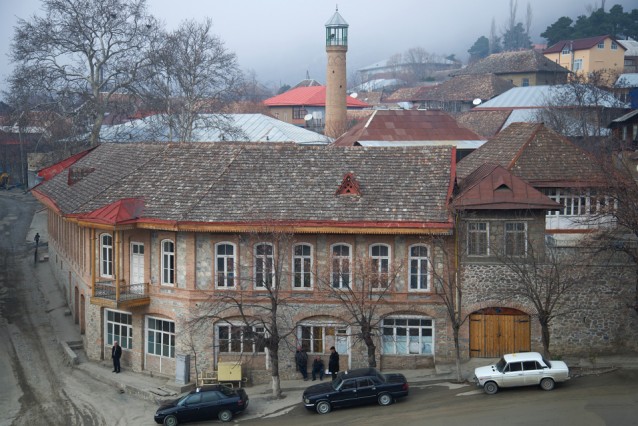 Sheki is known as a sweet place for multiple reasons. It’s not surprising that one of the first shops we see as we walk up the main street is one of many confectioneries specializing in Sheki halva, a sticky-sweet treat made with layers of rice-based lace interspersed with ground nuts, sugar and cloves. The halva is sliced and sold by the kilogram, or in whole pans like a cake (round or sometimes heart- or crescent-shaped) with saffron-coloured lettering stencilled on top for the occasion: “Congratulations on your marriage;” “Happy Birthday,” etc.

Azerbaijanis say the rural culture of Sheki is sweet as well. Walking along the tree-lined streets and watching interactions, one gets the impression that everyone knows each other. If you ask about certain professions, you hear the same names over and over: Tofiq is the shebeke master; Tfu Tahir tells the best jokes. One halva maker tells me he spent his career in Baku, but now at the age when his peers are retiring, he has come back to Sheki to open a new business because he missed the place.

The first theory we hear about Sheki’s reputation is that it was this neighbourly familiarity that gave rise to the local culture of humour. Several residents tell me that the humour originated with nicknames. Azad Sultanov, halva maker, says [The humour] is spontaneous. It comes from the sweetness and the kindness of the culture here. For example, we use nicknames a lot here, just to joke with each other. If someone named Ahmad were seen wearing galoshes two or three times they would start calling him Galoshes Ahmad. Or if he always rode a donkey they would call him Donkey-Riding Ahmad. It came from satire, from the way we relate.

Proud to be home-grown

Sheki jokes pack a punch because they often pit the uneducated village simpleton character against the educated, the white-collar or the urbanite

Sheki humour includes gently ribbing individuals with nicknames, but it also has a collective level captured by anecdotes that poke fun at what it means to be from Sheki. The jokes often feature Haji Dayi (Uncle Haji), a historical real-life resident of the city named Ilyas (but nicknamed for his multiple pilgrimages) who was known for his quick wit and the self-deprecating simplicity of his punchlines. 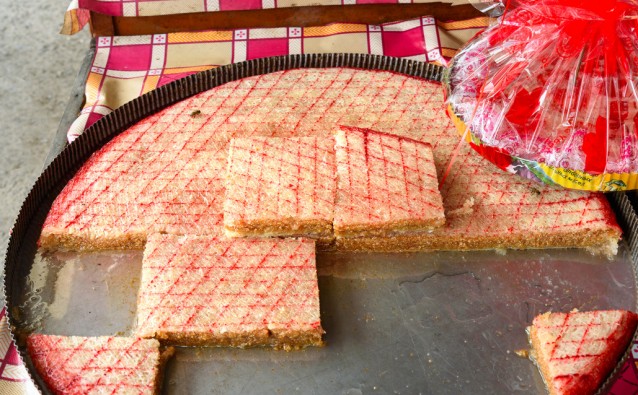 Sheki jokes pack a punch because they often pit the uneducated village simpleton character against the educated, the white-collar or the urbanite. There seems to be a certain pride here in not being from Baku. Sheki was a Silk Road trade city, an accomplished historical place in its own right, but it is a far cry from an urban metropolis.

I ask Tarana Abdullayeva, Director of the Palace of Sheki Khans Historical Preserve, to name distinguishing features of Sheki humour and she is quick to mention another important factor: They have their own accent that sounds different from other regions.

Many other regional accents entail variations in vowel pronunciation, but the Sheki accent also affects some consonants, like saying “maa” instead of “mənə” (for “to me”) or “gəlitdi” instead of “gəlibdi” (for “came”). For this reason, the Sheki dialect has a reputation across Azerbaijan as “sweet” or “funny-sounding.” One blog about Sheki jokes (shekicity.wordpress.com) notes that it is important for the punchlines to be written in Sheki dialect in order for the jokes to be effective. I note that Tarana also automatically thickens her accent when she gets to the punchlines of jokes she tells.

However, as we wander through Sheki attempting to put the city’s reputation to the test by soliciting jokes, I begin to feel as though the anecdotes are something of a currency. It’s harder than I expected to get people to tell jokes, even when I prime the pump with anecdotes of my own. They guard the humour as if it’s proprietary.

Many of the master craftsmen we interview are surprisingly tight-lipped, refusing to tell jokes or admit that they sometimes laugh at them. One almost reprimands me for asking him about jokes: This is serious work. We do have lots of humour here, but I don’t know the jokes well. That turns out to be a common response.

I try to ask a gaggle of men in a halva maker’s shop about the humour. But when I mention Haji Dayi, one of them deadpans: Haji Dayi is dead. This begins to seem like really hard work. Another man refuses to tell me jokes on the grounds that they’re inappropriate for ladies, saying without the curse words, where would the sweetness be? A senior citizen in a park makes a point to teach me a lesson when I ask him for jokes, warning me that many of them include obscenities. I say I don’t mind, and he proceeds to fire off a string of jokes so explicit they make my cheeks burn in the cold.

I begin to wonder whether Sheki jokes are reserved as a shibboleth for locals. And if they are, why? 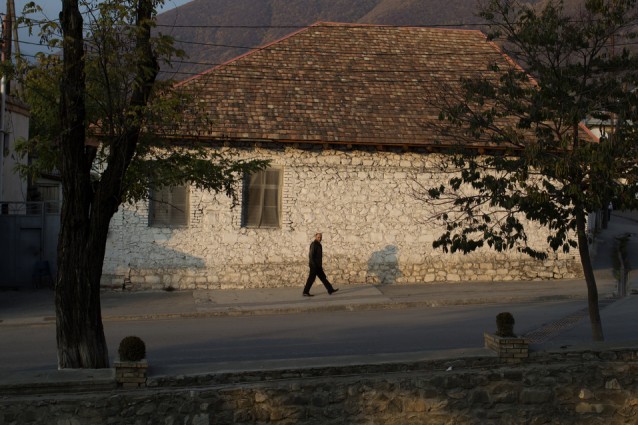 Ahundov Street is home to many of Sheki’s craftsmen and sweet shops. Photo: Tom Marsden

One halva maker since 1988, Azad Soltanov, gives me an insight into that question when he tells me a darker side of the Sheki humour story. He claims that the Soviet government intentionally created that image for the city because they wanted to mar Sheki’s previous reputation as a highly religious area and to keep others from taking it seriously.

They did this in order to ruin Sheki’s name. Sheki was a land of hajjis. We had the highest concentration of hajjis in Azerbaijan. There were 43 mosques here. There are graves here of people who had seen our prophet. Haji Dayi was a respected, renowned, wonderful person. But the policy in the Soviet period was to stain the names of the hajjis. That’s the reality today. They were trying to defame the name of Sheki. It was a conspiracy against religion.

The academically-inclined residents I talk to are also quick to point me back to the Soviet policy of painting this city as a “humour capital,” pairing it with its brother city of Gabrovo, Bulgaria. Tarana Abdullayeva explains, Back in the 80s we had humour connections with Gabrovo, Bulgaria, as brother cities. The humour of Gabrovo is sort of stingy, but Sheki humour is charitable and funny.

According to the Azerbaijani Writers’ Union (www. azyb.net), in 1987 a book (Sheki Anecdotes) was even published binding together Sheki humour with translations of Gabrovo jokes.

One wizened old tailor with Jackie Chan posters on his walls also mentions Gabrovo as part of the history of Sheki humour, but then says disappointingly, I’ve never been that interested in humour, and quickly turns the conversation to his favourite subject, geography, pointing my attention to the wall-width world map in the back of the room and talking about all the visitors from 50 countries who have come to his shop. (The history of foreigners pouring through Sheki as a trade city lives on. Once on the Silk Road, always on the Silk Road.) 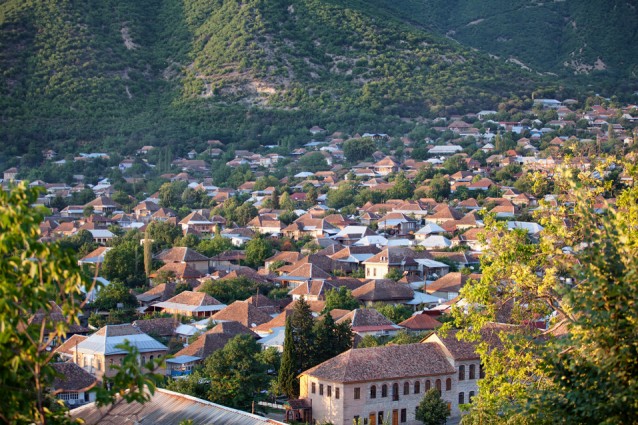 A view over the upper part of Sheki which is said to be where much of Sheki’s unique humour stems from. Photo: Aliona Birukova/Shutterstock.com

In fact, Sheki’s background as a Silk Road hub sparks another theory about the roots of its humour. An insight into this theory is offered by Abdal Abbas, a retired law instructor. He’s 88 years old, but he happily stands in the rain to tell us jokes, which unfortunately turn out to be too inappropriate to print. He explains, The jokes come from well-known people from here. Wit and knowledge have nothing to do with education...

He suggests that Sheki humour originated from quick-witted merchants and traders whose skills were sharpened by the demands of their lifestyles.

It is fitting, then, that after such a long search for people willing to tell jokes, we finally hit the jackpot with a group of seasoned salesmen. Partly on a whim and partly to get out of a sudden evening downpour, we duck into a shoemakers’ shop. The shop is run by three middle-aged brothers (Elshan, Dursun and Ahmad) with serious faces but whose eyes betray a playful side. They begin to tell jokes in turn.

As the jokes roll on, I begin to feel lightheaded and wonder if the heavy fumes from leather and shoe glue in their shop are part of what makes them all so jovial. When I inquire about that, they say, No... we’re used to that smell. (Exactly my point, I think to myself.)

The journal of the Azerbaijani Writers’ Union quotes a Sheki proverb: A person without a sense of humour can’t be taken seriously. Sheki’s humour might be a facet of this friendly rural society, a remnant of Soviet policy or a natural evolution of wit among Silk Road merchants. In any case, let’s give credit where credit is due: it’s not just shoe glue. These Sheki residents have a serious sense of humour.

As proof, read on for several of the anecdotes we collected from Sheki residents. 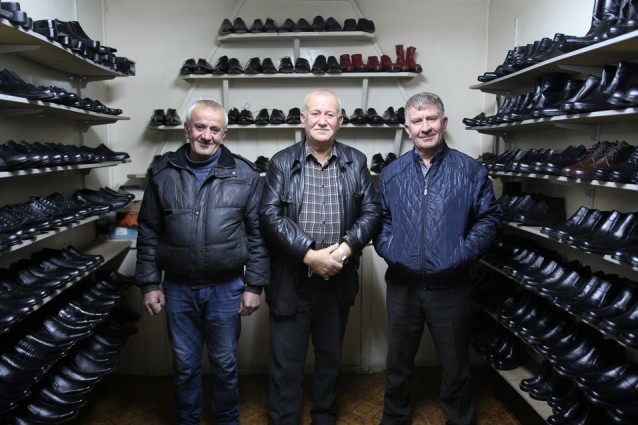 Oh, you guys are so backwards. Whatever we treat a patient for, that’s exactly what he dies from.

One time Tahir was walking along covered in dust and dirt. His neighbours, surprised to see him that way, asked,

Hey neighbour, what’s going on? Where are you going looking like that?

Tahir answered that he was coming from the graveyard, where he had been burying his mother-in-law.

The neighbours asked, Do people really get that dirty when they bury someone?

Tahir, not missing a beat, replied,

Well, she wasn’t being very cooperative about it.

Two men from Sheki are getting ready to go to Baku by bus. There’s only one seat free on each level of the double-decker bus, so one of them sits on the first level by the driver.

Finally they reach Baku. The man from downstairs notices that his friend who sat upstairs doesn’t look very well. He asks, What happened?

His friend replies, Wait just a minute – did your bus have a driver?

My heart was in my throat the whole way to Baku. Our bus didn’t have a driver!

Haji Dayi is working as a barber. He’s shaving a client when the client hears a sound and feels a sharp pain. He says, Haji, be careful! You’re going to cut my ear!

Haji Dayi holds out a severed ear and says, Do you mean this?

Haji Dayi’s friends decide to tease him by saying, You can’t get to Baku in six hours.

He says, Yes, I can! So he sells his donkey and buys a 06 [a nickname for the VAZ-2016, a typical Soviet car – Ed.]. He makes it to Baku in six hours. But it takes him five days to drive back. When his friends ask why, he says, The stupid 06 has five gears to go forward but only one gear to go in reverse!

For more on Sheki humour and crafts, don’t miss this video we made while exploring the city…


About the author: Martha Lawry is a former staff writer at Visions and an expert on Azerbaijani music and culture.