With the launch of the long-awaited Baku-Tbilisi-Kars (BTK) railway on 30 October 2017, Visions’ thoughts turned once again to the rapidly developing Port of Baku, the next link in a project to connect Europe with China – an ambitious extension of the historical Silk Route that did so much to develop trade and cultural links between East and West. We were lucky enough to catch up with the port’s chief operations officer, Eugene Seah.

An hour’s highway drive south of the capital, the port expands in developable isolation at Alat on the Caspian’s western coastline. As we approach, we wonder at what is already clear and neatly built, and the potential for more in the inviting space around it. It’s a fresh, crisp day, with the development around us a true presentiment of our meeting with our interviewee. 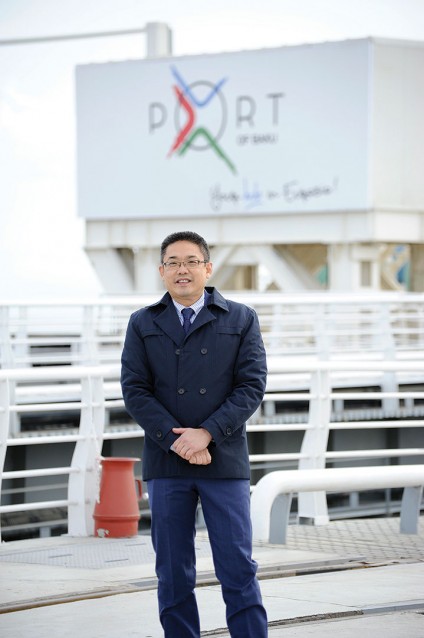 Eugene Seah effortlessly combines warm and welcoming with his businesslike approach to our meeting, while exuding enthusiasm for a project he joined two years ago:

I came here because of the shared vision of the President of Azerbaijan, Ilham Aliyev, that was presented in Singapore by Dr Taleh Ziyadov [Director-General of Baku International Sea Trade Port CJSC] in 2015. I was excited by the “hub” vision of Azerbaijan, which is truly fascinating and original. It was then that I decided this could be the opportunity of a lifetime to do new things in a new country breaking new frontiers and be a part of history in the making!

Mr Seah has been in the port industry for 25 years, starting in his native Singapore, the epitome of a successful port and economy, and has:

... been there, done it: planning, operations, the whole works, from A to Z.

The means to an end

It is clear from the outset that for Mr Seah the economic success of the venture, clearly the immediate focus, is still a means and not the end, and he has both objectives in mind throughout our conversation. Azerbaijan has made huge economic advances since the 1994 Contract of the Century, key to the successful exploitation of its bountiful hydrocarbon resources, but is aware of the need to move on and develop other sources of wealth, material and cultural, for its people in the long term. And so is Eugene:

For many years I think Azerbaijan has been taking resources out and selling them. Trading. I think in the old days of the Silk Road they were traders. But another component of the Silk Road was the exchange of cultural ideas, the influx of new ideas, innovative products and a mix of cultures, East and West that enriched the lives of people, not only in terms of products, but in terms of principles, values that inform life and show up in the way they live their lives in their respective countries. 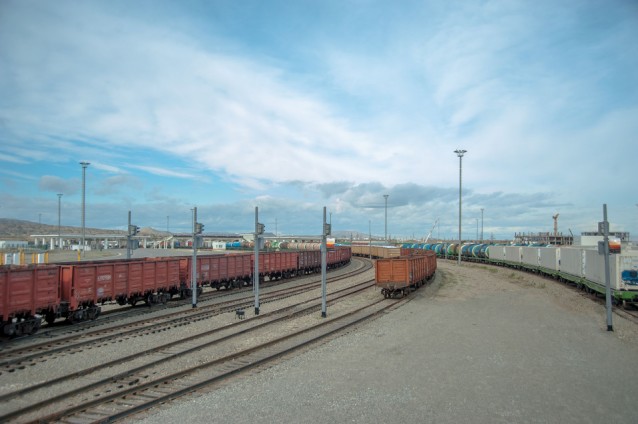 So first we are taken through the means, and we learn that ambitions focus on the provision of the best facilities and services possible at a port. It has been designed by the renowned Dutch company Royal Haskoning as a multi-purpose port. Transit business is the immediate priority, with the 826-km (513 miles) BTK line taking care of East-West railway cargo and passenger transport. Railway lines and roads on the eastern side of the Caspian Sea will cross Central Asia, linking Europe with western and inland China where, says Seah, manufacturing costs are lower than in the country’s southern and eastern cities, representing rich potential for new manufacturing and markets.

Longitude, as well as latitude

Transit is certainly the basic business of any port, but a hub with cargo passing through offers other opportunities and the Port of Baku intends to put all that space around Alat to good use. While the port comes first:

And a total of 12 berths was planned initially for Phase 1 of the port, handling a total tonnage of 15 million tonnes, inclusive of 100,000 TEUS [twenty-foot equivalent unit, an approximate unit of capacity for container-loaded cargo]. Once we have established the port’s efficiency, and people realise that coming through here means having the best service for the least cost... then people will think further, “This is a good place for transit cargo to pass through, why don’t I start doing something more active?” 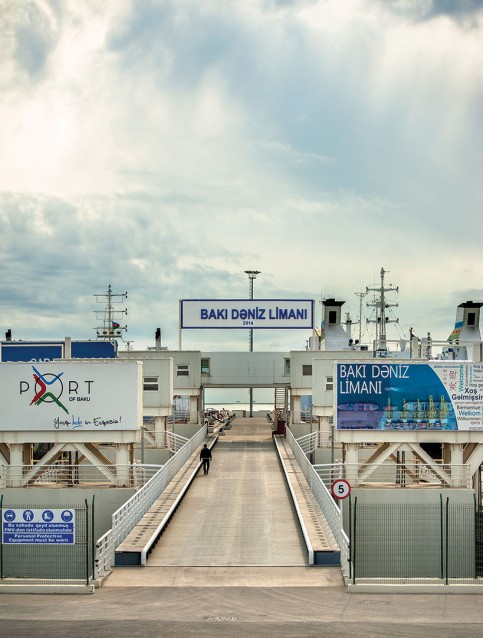 Warming to his theme, Eugene adds a further dimension to the port’s potential, pointing out that East-West markets are not the only ones seeking products and exchange. Longitude, as well as latitude, sees Baku favourably placed to facilitate North-South trade. Work is already advanced on the North-South Transport Corridor to connect, at first, a railway route between Russia and Iran via Azerbaijan, with thoughts of further expansion to the Baltics in the north and India in the south already being discussed. Again the port is key:

It’s central, close to the borders of Russia, Turkey, Iran, Central Asia and Europe. If you draw a 400-km radius you will include Aktau, Turkmenbashi, the Russian border, and also down south to Iran. So why not? Iran is opening up as a market.... There are markets for automobiles, for heavy agricultural equipment, consumer products.

So, we have to plan for Phase 2, with up to 17 berths, boosting our capacity to 25 million tonnes. This will include handling up to 500,000 TEUS of containers. This will be a significant challenge but, with the government’s support to invest in the infrastructure and make the port ready to connect with other ports in the region, the vision will become reality.

Advancing the idea of the port as the central hub for such potentially prolific trading routes and a Free Trade Zone (FTZ) is not to lose sight of the end purpose – to benefit country and people. And, given Azerbaijan’s strivings since independence to clean up an environment that suffered from Soviet oil-fixated neglect, it was heartening to hear a green element in the thinking about development and which businesses to attract:

In today’s connected world you cannot escape the fact that everything is connected, including the environment, which has a direct impact on the country’s economy because of its cost. If you have polluting industries, that is not efficient, there’s also a big social cost because of the impact on the health of the population. 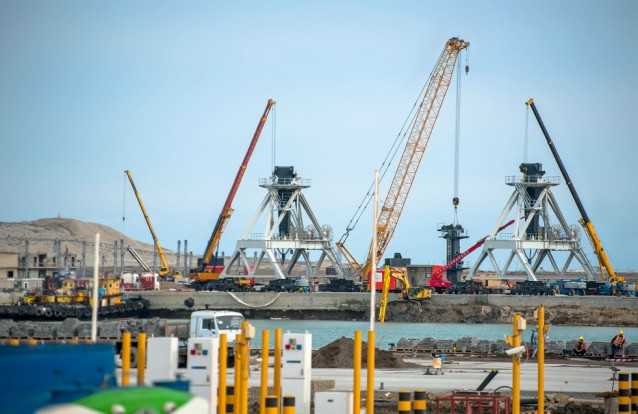 Much of the infrastructure is already in place. Photo: Eldar Farzaliyev

What is important is human capital development, says Mr Seah. And not only for people coming in; the commitment to develop the local workforce is also clear. After all, as he points out, even the best systems and equipment depend on their operators and for a new port these often require new skills and people with a positive approach, so education and training are essential components of the project. Not (yet!) a professor, but the port’s chief operations officer practises his own commitment to these principles at the Azerbaijan Diplomatic Academy, giving an MBA class the benefit of his experience and knowledge:

The feedback I get from them is good; that they are looking, first of all, for opportunities, and they welcome this.

Eugene sees that, as with all countries developing to meet the needs of the 21st century, new forms of training and thinking are the way to ensure a successful future. As a central transit and trading hub, connectivity is obviously a buzz-word in these parts, and where there’s connectivity, there must be information communications technology and this is where Mr Seah’s vision of a mission expands even further: [To be] a focus of information, digitised information;

[To] spread this thinking to Afghanistan, to the borders of Afghanistan, all the way to China, all the way through the Central Asian countries, so that people will know exactly where their cargo is by touching a few icons on their mobile phone.

The seeds, what we are doing here, the principles that I have just stated have been planted and been endorsed by our management and the country’s top leadership, so supportive of this strategy. 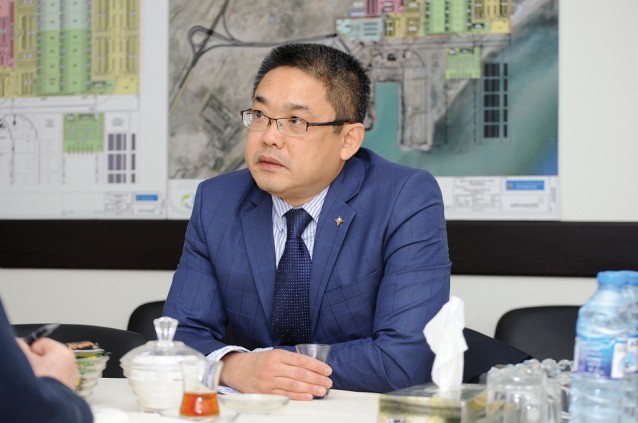 Eugene Seah during his interview with Visions. Photo: Eldar Farzaliyev

We hope to have a regional training centre for the various industries in the region, for example oil and gas, marine, port operations and logistics, to train them in these technical skills... I think that the people of Azerbaijan, the younger generation, for example, who have graduated from ADA, they have the correct mindset and that’s important; some of the skills, management etc. can be taught.

His confidence in Azerbaijan’s ability to make the port a success extends to all levels of society:

The government, under the president, strongly supports this project and... the right people are being put in the right positions to push this along the way.

On the ground, as we noted, there is an impressive organisation about the site at Alat. There’s still some way to go towards completion; the first ro-ro berths (enabling vehicles to drive onto and off ships - Ed.) are operating and completion of the whole port is scheduled for May 2018. Two Kazakh trains have already crossed from Aktau, using the port to access the BTK railway, one of them delivering wheat to the Turkish Mediterranean port of Mersin.

Progress is rapid; early in January President Aliyev officially inaugurated the ro-ro terminal. Director General for Mobility and Transport of the European Commission, Henrik Hololei, confirmed that the Commission had allocated one million euros towards technical assistance for further development of the port in recognition of the importance of diversifying routes between Europe and Asia. Also in January, a draft law to govern the FTZ was produced, indicating the establishment there of a Business Services Centre and exemptions from duties and taxes for business, goods and services there. While in February, Azerbaijan Railways began laying new tracks at the Eybat cargo train station in anticipation of the expected surge in cargo transport East-West and North-South. 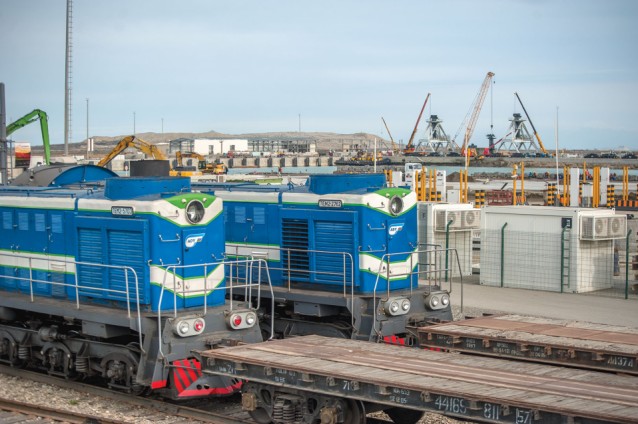 Last but not least, from 8-11 May in 2018, for the first time in Central Eurasia, Port of Baku will host the World Ports Conference by the International Association of Ports and Harbours (IAPH). Today IAPH is an international organization representing the voice of the world port industry; some 180 ports and 140 port-related businesses in 90 countries. The main theme for the IAPH Baku 2018 World Ports Conference is Ports of the Future: Building Hubs, Accelerating Connectivity. The four-day conference will focus on key topics like the transport corridors emerging in the region and around the world, interconnectivity and multi-modal transportation, regional aspects of hub development, multiculturalism and diversity in global shipping as well as the concepts of “Smart Ports” and “Green Ports.”

We look forward to reporting further on the progress of a project that has all the potential to enhance Azerbaijan’s contribution to global connectivity, to the benefit of all.

About the author: Ian Peart is a freelance writer and editor and a former editor of Visions.

312400
LiteratureAutumn 2018
Ali and Nino: Love at the Crossroads
by Kate O'Donnell